T. Rex dinosaurs packed as many neurons in their brains as a baboon, a new study has found. This means that they were capable of problem-solving, tool use and even developing a culture. Some other dinosaurs like Allosaurs weren’t too far behind either, with brains comparable to a monkey.

The study published in the Journal of Comparative Neurology invites us to change our image of dinosaurs from monstrous predators tearing apart their prey and leaving crashing destruction in their wake to clever tool-crafting and wielding creatures capable of social interactions. Is this possible?

Dinosaurs are known to have inhabited the Earth millions of years ago from their fossilized remains. But fossils do not preserve soft tissues like brains. So neuroscientist and author of the study, Dr Suzana Herculano-Houzel from Vanderbilt University in the US, turned to their modern descendants—birds–for her study, IFL Science reports.

Birds aren’t the dumb creatures they were once thought to be. Recent studies have found that even though their brain sizes are small, they have more neurons per ounce of brain than mammals and primates, giving them problem-solving abilities, reports the Daily Mail .

Herculano-Houzel used phylogenetic bracketing, a method of inference based on the position of an organism in an evolutionary tree, to look for traits that extinct dinosaurs could have shared with their modern evolutionary descendants. But, as she explained in a Twitter video, “First, you have to have good reason to believe that the same proportionality that applies to birds already applied to dinosaurs like T. rex , which is what I just did.”

It’s officially news: T. rex had baboon-like numbers of brain neurons, which means it had what it takes to build tools, solve problems, and live up to 40 years, enough to build a culture! Paper is just out in J Comp Neurol. Reality was actually MORE terrifying than the movies! pic.twitter.com/6HafJVHQlk

She went on to add on her website, that the problem was deciding whether the scaling rules of endothermic sauropsids (birds) or ectothermic sauropsids (reptiles) applied to dinosaurs. Or perhaps they were mesotherms, in-betweens, as a 2014 study had suggested. However, she quickly realized that terming them mesotherms was the fallacy of lumping them together as a whole rather than respecting their diversity.

Once that was settled, Dr Herculano-Houzel studied the fossilized skulls of theropods – a group of bipedal dinosaurs that includes T. Rex – and existing sauropsids using CT scans. Looking at the relationship between estimated brain and body size, she found theropod dinosaurs scaled just like modern ostriches and emus and chickens.

She could then calculate how many neurons theropods would have had using the numbers and brain mass of existing sauropsids. She arrived at numbers similar to those of primates–a brain mass of 343 grams and 3,289,000,000 telencephalic neurons, not far from the 2,875,000,000 found in baboons. 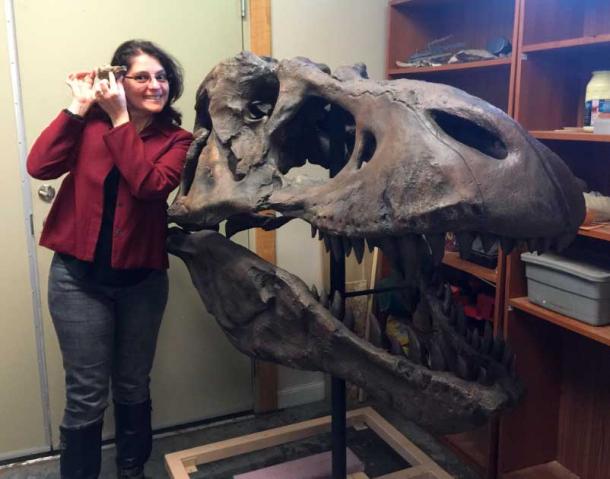 Dr Herculano-Houzel standing next to a life-size cast of Sue The T. rex (the one in the Chicago Field Museum) during a visit in 2017 to the Stone Age Institute, Indiana. Dr Herculano-Houzel is holding a life-sized copy of Sue’s endocast. It’s laughed at for being tiny compared to her body – but it’s actually baboon brain-sized, and so perfectly sufficient to hold baboon-like numbers of neurons in the telencephalon! ( © Dr Herculano-Houzel)

Dinosaurs Could Have Been as Intelligent as Primates

Her findings mean that dinosaurs were anything but the mindless monsters of popular imagination. Correlating with an earlier study by her that associated neuron numbers with life expectancy in warm-blooded animals, she suggests that T. Rex could have lived for 42 to 49 years. Although this is at variance with the fact that the oldest known specimen is estimated to have lived only 28 years, the implications are quite extraordinary.

Living for such a length of time with such a large number of neurons could have given these creatures the thinking ability to solve problems, devise and use tools and even build a culture. Based as they are on estimations rather than actual analysis of theropod brains and observation of their behavior, her conclusions aren’t entirely uncontested by the scientific community.

However, if true, they turn on their head the popular image of dinosaurs. As Herculano-Houzel says:

“An elephant-sized but agile carnivoran biped endowed with macaque- or baboon-like cognition must have been an extremely competent predator indeed . The present findings invite the speculation that theropod dinosaurs such as T. Rex, with even more telencephalic neurons than modern tool-using and tool-making corvids, had the biological capability to use and craft tools, and develop a culture, like modern birds and primates.”