Scanning with a neutron beam has helped researchers crack the mystery of a gold-plated medieval pendant found in the German town of Mainz in 2008. The non-invasive and non-destructive technique has revealed tiny bone splinters inside the pendant, which are probably religious relics.

An interdisciplinary team from the Leibniz Center for Archeology (LEIZA) at the Technical University of Munich (TUM) has been investigating the pendant that was found in 2008 from a medieval rubbish dump in Mainz, Germany , according to the TUM website . However, fearing damage to the artifact, they weren’t able to open the pendant, even though they believed it to contain something.

Since the researchers felt that opening the 800-year-old pendant physically would damage it irreversibly, they turned to non-destructive techniques to learn its secret, reports Medievalists.net.

Matthais Heinzel, a restorer at LEIZA, said, “The non-destructive investigation with neutrons was particularly useful, since we couldn’t simply open the pendant and look inside. Centuries of corrosion have heavily damaged the object as a whole and especially the lock mechanism; opening the pendant would have meant destroying it beyond all hope of repair.”

Tomography and Prompt Gamma Activation Analysis (PGAA) with neutrons were used to scan the interior of the pendant, during which five separate packets made of silk and linen were revealed. Each of the packets contained tiny bone splinters , which are believed to be the relics of a saint .

The gold-plated copper pendant is decorated on the outside with enameled pictures of Jesus, the four evangelists, Mary and four female saints . It has been dated to the 12th century, and the researchers believe it originated in a workshop in Hildesheim in Lower Saxony.

Neutron tomography shows the interior of the medieval reliquary pendant. It has been discovered to contain possible bone relics of a saint. ( Sabine Steidl, LEIZA )

However, when the first x-rays weren’t successful in showing the organic content of the artifact, the team turned to neutron scanning. Unlike x-rays, neutrons can penetrate metals and make organic substances visible. Dr. Burkhard Schillinger of TUM conducted the neutron tomography, which made the packages with bone splinters visible. The individual elements were then discerned by triggering them with the PGAA to emit gamma radiation . 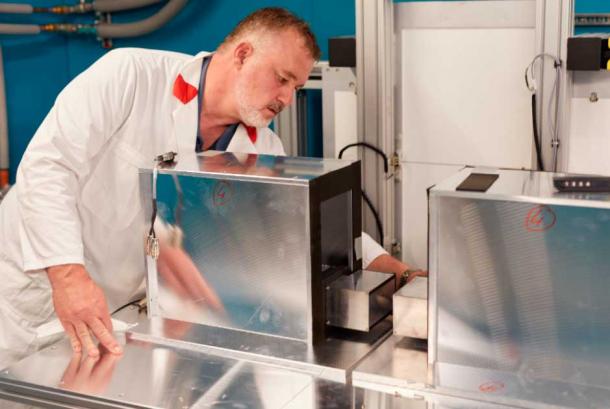 Instrument scientist Dr. Burkhard Schillinger at the radio and tomography facility with at the Heinz Maier-Leibnitz Center (MLZ) of Neutron Research. (© Bernhard Ludewig )

However, the scientists weren’t able to conclusively establish the identity of the remains. “We can’t say whether or not these bone splinters are from a saint and, if so, which one. Usually relic packages contain a strip of parchment indicating the name of the saint. In this case, however, we unfortunately can’t see one,” commented Heinzel in the TUM release.

During restoration, Heinzel came upon the fragment of a cord in the suspension eyelet of the pendant. On further examination, the cord was found to be made of silk. As Heinzel said, “This is the first evidence that such pendants may have been worn around the neck on a silk cord . Using neutron tomography at the TUM, we were also able to measure the thread thickness and thread spacing of the textiles on the inside.” 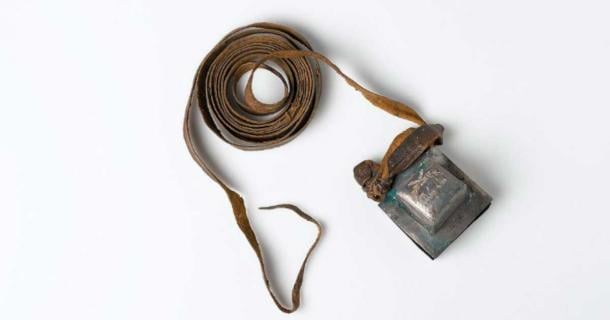 The German medieval pendant has been identified as a very rare phylactery. Pictured: Another silver and leather phylactery case made in Germany in 1885 (Brooklyn Museum / CC BY SA 3.0 )

Only three other relic containers of this type, known as phylacteries, have so far been found. Phylactery comes from the Greek term for safekeeping or protection. They were worn on the body, usually hanging around the neck.

The reliquary has been handed over to the General Directorate for Cultural Inheritance at the State Archeological Directorate of Mainz and is being temporarily exhibited in the medieval exhibition “ Aurea Magontia – Mainz in the Middle Ages ” at the Mainz State Museum.

It will be interesting to see if future technological developments can enable scientists to establish with a greater degree of certainty if the phylactery indeed contains the relics of a saint, and which saint they can be assigned to. Evidently, it was someone who was believed to impart powerful protection to the wearer.