Thieves trying to loot a giant antique statue by prizing it up with a crane ended up in police custody in Aswan in Egypt. The statue of pharaoh Ramesses II weighs a whopping 10 tonnes.

According to the Telegraph, the Egyptian Public Prosecutor’s office issued a statement saying it would detain the men for four days, charging them with “attempting to steal a pharaonic statue”.  The statement added that the three were “arrested in possession of manual digging tools and heavy equipment, a crane”, evidently in an effort to “lift the statue and excavate antiquities in the area”.

Suspecting the three to be part of a wider network, Al Jazeera reports, the Prosecutor’s Office went on to say that it has asked to police to “quickly investigate others who were involved … in the crime”.

Further, the Antiquities Authority in Aswan confirmed the “antiquity [of the statue] and attributed it to Ramesses II, with a weight of approximately 10 tonnes”, the statement said. 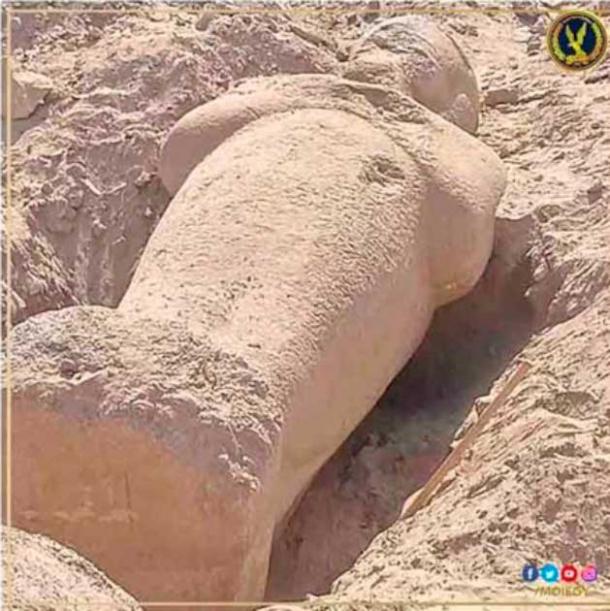 The Ramesses II statue looters attemped to crane away. (Egyptian Ministry of the Interior)

Ramesses II, also known as “ Ramesses the Great ” for his military prowess and the many magnificent temples and other structures he got built across Egypt in the 67 long years of his rule, was the third king of Egypt’s 19th Dynasty. His rule was the second longest in Egyptian history.

Colossal ancient statues of Ramesses II have been found all over Egypt.

A Crane to Lift and Make Off with Stolen Goods

The thieves were caught in a quarry south of Aswan, which is located on the Nile around 643 kilometers (400 miles) south of Cairo. According to Ahram Online , they had with them manual digging tools, heavy equipment and a forklift. Reports from the Egypt’s Public Prosecution Facebook page states they had a crane. The prosecution found traces of drilling on the 3 meter (9.8 feet) high and 1 meter (3.2 feet) wide Ramesses statue.

They also seemed to be trying to carry away basins from the Greco-Roman period from the site. The quarry is spread over 34 acres (13 hectares) and is under government ownership and protected under Egyptian antiquities laws which seek to thwart illegal digging and smuggling of antiques.

Aswan is very rich in archaeological sites, the Temple of Isis from the Roman era being one of its star attractions. Discoveries of antiquities continue to be made in Aswan even now.

While it is unclear what alerted the police to the operation, the thieves’ mobile phones had video footage sent via social media apps of “statues suspected to be archaeological, and other clips of excavation work”.

Egypt Has a Long History of Looting of Its Antiques

Egyptian laws relating to illegal excavation are pretty harsh with prison terms going up to 25 years, virtually life imprisonment, as well as steep fines. This is not surprising given the scale of illegal digging and smuggling of artifacts from Egypt. Egyptian authorities have said that around 29,000 antiquities have been dug up and sold abroad in what is a multi-billion dollar black market. It particularly boomed during the 2011 revolution when security guards abandoned their posts at museums, giving a free run to looters.

Egypt has suffered large-scale looting of its antiquities from colonial times when the British carted off many valuable historical objects to its museums, and Egypt has long been demanding their return. In recent times, the demand for the repatriation of one such artifact, the Rosetta Stone held in the British Museum, have grown particularly vociferous.

The Rosetta Stone led to a great step forward in deciphering Egyptian hieroglyphs. It was discovered by French soldiers in 1799 and handed over to British forces and taken out of the country along with several other valuable antiques under the terms of a surrender treaty. Now thousands of Egyptians have signed a call for its return, terming the British action “an act of plunder” and a “spoil of war”.

Even in a country fairly habituated to looting of its abundant antiques, starting with colonial loot, the recent attempt to use a crane to lift a gigantic statue and cart it off would have to rank as pretty daring. How did the thieves hope to remain unnoticed while carting the pretty arresting stolen goods? As things went, they were caught red-handed even as they were attempting the robbery.