Consider your home bathroom: you probably have a lot of toiletries in there, such as soap, deodorant, and perfume. In today’s age, these items are associated with cleanliness and health. But were they always? Believe it or not, humanity has had a love-hate relationship with body odor for millennia. Whether sweet, pungent, or simply not there at all, different cultures have unique outlooks on body aroma, shaped by fascinating histories.

So, what’s led us to our modern-day efforts of deodorant and soap? What did ancient humans do before these items were created as they are today? Read on to find out.

Before we dive into the history of perfumes, let’s first cover why we need these toiletries in the first place. Most of us think of sweat as the main culprit when it comes to body odor. However, sweat itself doesn’t actually smell like much of anything. Instead, it’s what the sweat causes that leads to body odor.

See, there are lots of bacteria both in and on our bodies. One of these bacteria is called Staphylococcus hominis , and it takes great advantage of our body’s natural functions. These bacteria consume certain compounds in your sweat and then release chemicals that cause the dreaded smell of “B.O.” or Body Odor. So, in areas where you sweat more, you smell more, because the bacteria are eating more!

Ancient people of course didn’t know about the specific cause of body odor, but they did know it was a significant issue. They identified the parts of the body where odor occurred the most and blamed it on sweat, trying to combat it first with perfumes and later with deodorants. The history of humans combating their body’s odors starts all the way back with the ancient Egyptians . 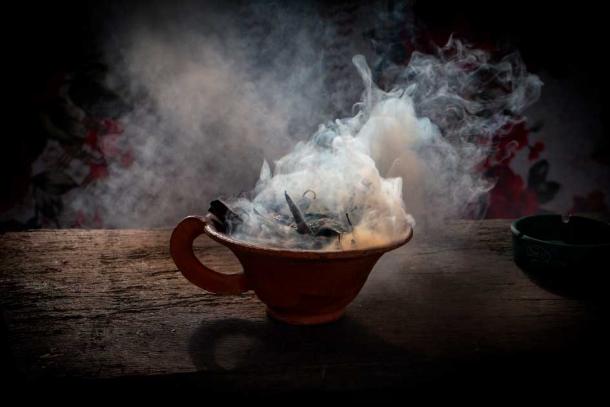 The early Egyptians and the Greeks and Romans all made use of incense to cover up body odor smells in crowded places. ( OlegD / Adobe Stock)

Ancient Egyptians were the first humans in recorded history to have attempted masking body odor. Some of the methods Egyptians used were to produce special concoctions out of ingredients such as tortoiseshell, ostrich eggs , and gallnuts that they would apply to their bodies like a paste. They would then incorporate different natural oils into the pastes, often applying them on their head, neck, and wrists to keep them smelling fresh.

Eventually, they started using plants such as cinnamon, lemongrass, myrrh, lily, and rose in their pastes. Some pastes were so thick they were like a wax and would be applied to the top of the head in the morning so it would melt down the body as the day progressed.

Egyptians also enjoyed their fair share of incense and would burn it frequently to keep areas with lots of sweaty humans smelling fresh.

Eventually, they continued working with their pastes and waxes until they began creating scented beads, which they used to make fragrant jewelry to adorn themselves with. Ancient hieroglyphics suggest that ancient Egyptians also used to wear perfumed cones on their head, made of waxy material similar to the beads.

After the ancient Egyptians, ancient Greeks and Romans started creating their own strong-smelling spices and perfumes. Often, these were seen as luxury goods and were quite difficult to get your hands on if you couldn’t find them on your local trade route.

In fact, the earliest known perfumery can be traced back to the Roman Empire , where daily bathing and masking scents were normal aspects of Roman life. Romans would soak in a bath adorned with sweet-smelling flowers before anointing themselves with scented oils and salves, mostly made of essential oils. 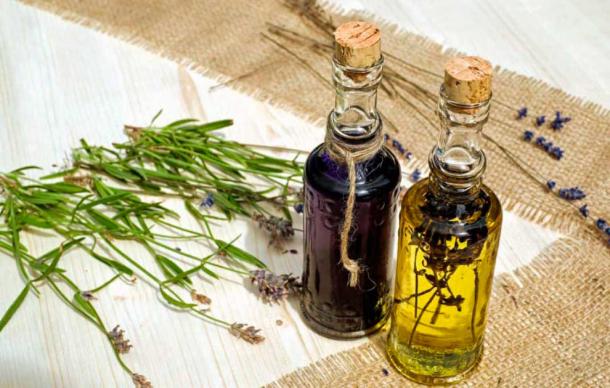 At this point, many of these oils and salves were produced from flowers like violet, chamomile, rose, lavender, and jasmine. They may also have incorporated fragrant spices like cinnamon, cloves, and camphor, in addition to animal byproducts such as civet, musk, and ambergris. These fragrances were often carried in small bottles tied to their wrists so they could be reapplied throughout the day, while powdered fragrances (for clothing) were carried in fabric sachets.

Perfumes, salves, and incense were an everyday part of early European culture, and they eventually became a significant part of many religious rituals as well. Around the 5th century, Judaism and Christianity began to incorporate essential oils and incense into their rituals, mainly because priests needed to cover up the scent of their stinky followers. With so many people congregating in one area, spaces became crowded, and smells became pungent, leading to incense burning becoming a regular part of religious ceremonies.

At the same time, many priests condemned the use of personal perfumes on the body, claiming they were a form of vanity. To avoid such a sin, Christians stopped regularly bathing and using perfumes for several centuries. Identifying Christians became obvious, as they were amongst those that were the dirtiest and smelliest in society. Islamic communities, on the other hand, did not have these same teachings on vanity and therefore kept bathing alive and well.

Eventually, bathing slowed down and perfumes became the primary weapon against stench due to the bubonic plague . Because it was believed it was spread through the air (and because humans didn’t discover “germs” yet), bathhouses were closed, leaving people no choice but to return to aromatics. In some regions, large bonfires would be held to burn large amounts of oil to spread the aroma throughout the town. At this time, small flower bouquets called “posies” were designed to be carried as accessories so you could put them against your nose as needed.

As time without baths passed, other misinformation began to be spread. Because there was still little to no understanding about how illness came about, some early physicians in the 15th and 16th centuries spread the concept that bathing may actually be harmful. These scientists claimed that water softened the skin, which weakened the skin over time and could cause illness. While some avoided baths to keep their skin “strong,” those that chose to continue to bathe took extreme precautions to slather themselves in oils before entering the water and removing themselves quickly so as not to become too “soft.”

The French, in the 17th and 18th centuries, tried to develop new methods of perfuming people and places. They would often infuse strong essential oils into everyday objects such as fountains and clothing to help mask odors. These items all became extremely popular with consumers, quickly turning France into the leader of the international perfume industry at that time. The French also took posies to a new level, creating a “smelling box” accessory that held fabric soaked in liquid fragrances. They advertised these boxes as having medicinal qualities, as well as being a stronger accessory for odor masking than posies. 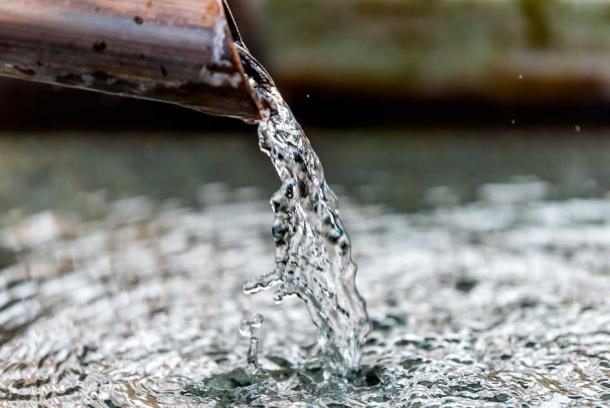 Clean running water was the next step in the evolution of basic hygiene levels in crowded cities and this meant modern sewers and industrial water-cleaning methods. ( Kristina Blokhin / Adobe Stock)

In the 19th century, Europe took the initiative to improve sanitation throughout several countries. Within just a few decades, they had greatly expanded community access to fresh water, developed new sewer systems, and created an organized trash disposal system. With bathing and basic hygiene becoming normalized again, extremely strong perfumes were no longer as necessary as they were before.

It was around this time that perfumes became less pharmaceutical and more cosmetic. Once they became cosmetic, they became more associated with femininity, just like other cosmetics. To smell good was to be a clean, good woman.

Around this time, the US started getting wind of new hygiene practices from Europe. Though they previously rejected European hygiene and rarely bathed, the late 19th century brought about new advancements in cleanliness for Americans. Americans began installing sewers and expanding access to water as Europe did, and by the 20th century, they started using showers, toilets, and toothbrushes.

In 1888, the world’s first commercial deodorant, marketed as Mum, was developed in Philadelphia. Mum was a waxy, creamy concoction designed to be applied on your sweatiest, smelliest parts. Soon after, in 1903, the world’s first antiperspirant was introduced, which contained aluminum chloride. Aluminum chloride is an aluminum salt that’s able to block sweat and is still used in many deodorants today!

The only issue with these early antiperspirants was that they were highly acidic, so they often left stains on clothing and even caused a burning sensation on the wearer. For some, this was a small price to pay for reduced sweat and odor. Eventually, companies making antiperspirants began targeting women to boost their sales, making claims that women who didn’t use their products were unappealing to men. These ads also claimed that nobody would be willing to tell these women about their hygiene issues, so it was best for them to take care of it before anyone noticed.

Through the early 1900s, deodorant was primarily marketed to and purchased by women. It wasn’t until 1935 that the first men’s deodorant was produced, sold in sleek black packaging to entice men to buy it for its “manliness.” Instead of advertising that men would be unattractive to women without deodorant, ads frequently posed that men would be judged by their bosses and coworkers for their body odor. These advertisements created concern in working men for their job stability, so they too started buying and using deodorant regularly. 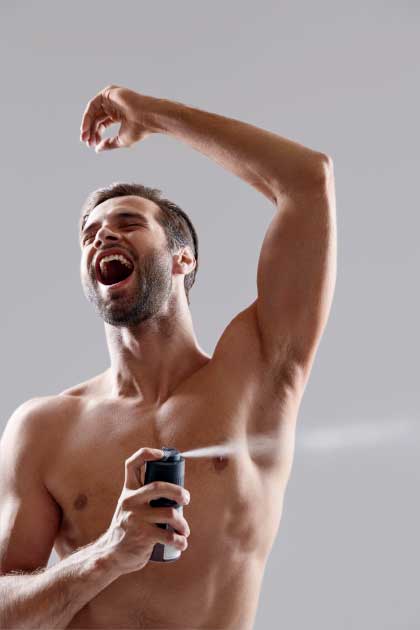 For a few decades we have used super modern deodorants and daily showers and lots more to ensure that we have no body odor at all or almost but that’s not true for everyone everywhere. ( Drobot Dean / Adobe Stock)

Over time, deodorants shifted from creamy pastes into roll-on sticks, then aerosols, then normal sticks. Deodorant is now considered a regular part of our hygiene routine, regardless of the type of antiperspirant you purchase. Nowadays, we have a plethora of hygiene products including deodorants, soaps, shampoos, and perfumes. With so many options, body odor has taken a backseat (as long as you use them!).

As society advances, new hygiene products are being developed and sold constantly. Natural deodorants and paraben-free shampoos are becoming more common as many wish to return to a time before preservatives and extra chemicals, which can cause irritation with frequent use.

In the future, we will likely see many other types of methods to block body odor, whether in the form of perfumes, soaps, or antiperspirants. Fingers crossed that someday we don’t go back to too natural, though.

Top image: Body odor has been around for as long as we have been and early on civilizations from Egypt to Greece and Europe developed things to keep us smelling clean. Source: Andrey Popov / Adobe Stock

Fontanez, S. 2008. Body odor through the ages: A brief history of deodorant . Available at: https://www.mentalfloss.com/article/18081/body-odor-through-ages-brief-history-deodorant .

Morris, E. T. 1984. Fragrance: The story of perfume from Cleopatra to Chanel . Scribner.

Oatman-Stanford, H. 2016. Our pungent history: Sweat, perfume, and the scent of death . Available at: https://www.collectorsweekly.com/articles/our-pungent-history/ .

The Week. 2016. A brief history of Body Odor . Available at: https://theweek.com/articles/614722/brief-history-body-odor