A scourge of early medieval Europe, the Vikings were a fearsome group. The very thought of a Viking sword slashing before you conjures images of fearless warriors raiding and pillaging villages, leaving chaos in their wake. And there are few things more iconic to the Vikings than their swords. The sword, during medieval times, was a symbol of power and prestige. For the Norsemen, this was especially the case. But how do we know what exactly a Viking sword is? What makes it different from other swords? The answer may be more complicated than you expect.

The vast majority of Viking swords found by archaeologists in Britain and Ireland were found in graves where they were buried with their owners. These swords are usually the top-of-the-line Viking sword models. These expertly crafted swords were the status symbols of a few elite men who could afford to wield such swords and take them to their grave or have them specially made for their final journey.

Viking swords were prestigious weapons, and most Viking warriors couldn’t afford them. The best Viking swords were highly valued and often passed down from generation to generation. This means we are getting a somewhat skewed version of what a Viking sword is. It is hard to say exactly how different these aspirational grave swords were to the more typical swords used by the Vikings. 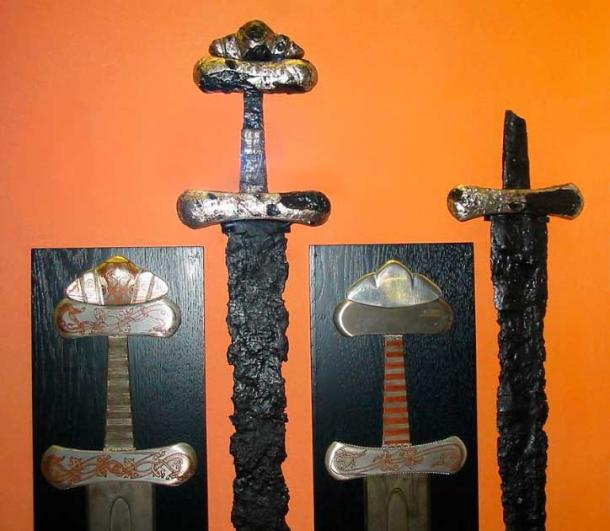 To understand what counts as a Norse sword, it is important to first categorize the actual Viking swords found so far in a general sense. Many attempts have been made to do this through the years but the most influential one is definitely that of Norwegian archaeologist Jans Petersen.

Petersen published “De Norsk Vikingesverd” in 1919, in which he outlines and categorizes the different types of Viking swords. The book was so influential that it is still used today, but it is not without its flaws. Firstly, it only categorizes the swords based on the hilt type and pays no attention to the blades. And some of Petersen’s sword variation classifications are based on small, largely insignificant variations.

One of the biggest problems with defining a Viking sword is that a lot of their swords were made outside of Scandinavia. Frankish weapons were in huge demand during the Viking era, with Frankish steel being mass imported to Scandinavian markets. Many of these swords made in the Rhine area bore the name Ulfberth, perhaps after the sword master, but the production of these swords continued for two centuries.

It is possible Ulfberth’s workshop continued using his name after he died. These Viking swords became such a problem for the Carolingian King Charles the Bald that he banned the sale of weapons to Vikings. Selling weapons to his rivals clearly wasn’t working too well for him!

This Petersen type D sword hilt with gold wire ornaments, dated to circa 750–850 AD, was found in the river Meuse near Aalburg, in the Netherlands. (Rijksmuseum van Oudheden, Leiden). (Kleon3 / CC BY-SA 4.0 )

What types of True Viking Swords Have Been Found?

In Scotland, 34-36 Viking swords have been found. At least 10 of these swords are what Petersen categorized as type H. This is also the most popular sword type found in Scandinavia. These swords are often decorated with a pattern of alternating strips of copper-alloy and silver.

Considering the prevalence of this Viking sword type in Scandinavia, it is safe to say these are considered Viking swords. Even still, they are somewhat Frankish in style.

Of the remaining swords, 14 are from a wide range of other types. These swords are far more unique and tend to be more extravagant.

A similar situation is seen in Ireland where over 80 different types of Viking swords have been found. The vast majority of these are from Norway, while one is an Ulfberth sword from Frankia.

One great example that shines a light on the complexity of defining a Viking sword is the Donnybrook sword found in Ireland. This sword is incredibly hard to categorize. An analysis of the blade has revealed it is low in nickel and cobalt, two compounds found in high quantities in Scandinavian swords. Even the hilt sheds no insight into the sword’s origins. While it can be categorized as Petersen type D, this group of swords has quite a lot of diversity in terms of decoration. There have been many different suggestions on where this type of hilt was produced. Just to make it even more complicated, it is possible that the hilt and the sword were made in two separate places!

A similar sword hilt can be found in Scotland called the Eigg sword hilt. This is also a Petersen type D hilt and has been held up as an icon of the Viking age due to how well it has been preserved. It is hard to tell whether these type D hilts are Frankish made or Frankish inspired.

They are certainly or arguably somewhat Frankish in form and somewhat Scandinavian in style. This makes it difficult to determine exactly where they came from.

Other Viking swords found in Scotland include swords manufactured in England as well as a sword that is multi-combo sword type with similarities to the Petersen Y, P or L types.

So, What Makes a Viking Sword?

Overall, what is defined as a Viking sword depends on exactly what we mean. To limit the definition to swords manufactured in Scandinavia between the ninth and eleventh centuries AD would be foolish.

To limit the definition to swords with a Scandinavian style would also mean discounting many of the most famous Viking swords found.

What distinguished a Viking sword during the Viking era was not its design or origin, but rather its history and its use as a symbol of power and prestige . Swords were frequently passed down from generation to generation or given as gifts to high-status people to stay on good terms with them.

It did not matter to them where the sword came from, nor what style it was designed in. The symbol of the sword was what mattered. In the end, tying to define a Viking sword by style or origin is a rather pointless endeavor.