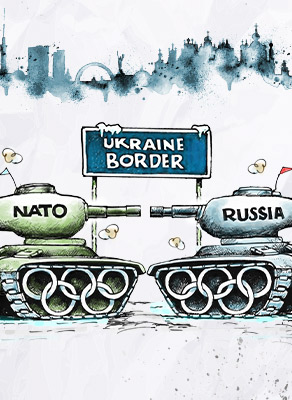 Russia’s recent invasion of Ukraine is yet another exposure of the centuries-old struggle for domination over Central and Eastern Europe. Germany and Russia were expanding into these fertile lands for centuries, with support of another hidden power – the City of London.

To understand the network of core alliances and how and why the City of London merchant elites had been financing Germany and Russia (Imperial, Soviet and post-Soviet Russia), it is necessary to look into history. The lack of accountability of the financial and corporate elites of the City of London (and City’s American branch Washington D.C.) which had been financing regime leaders and military-industrial complexes in the past century, especially before World War II, had once again created conditions for a war in Europe. Russia’s invasion of Ukraine and subsequent sanctioning of Russia by the world community is now steadily revealing this hidden network of business alliances that emboldened Vladimir Putin to threaten the security and welfare of European nations, in particular those of Central and Eastern Europe.

British MP and geographer, Halford J. Mackinder, stated in his 1904 famous publication “The Geographical Pivot of History” that control of Eastern Europe was critical for the “Heartland” of “World-Island”. In 1915, German liberal politician, Friedrich Naumann, came up with a concept of Mitteleuropa, that was meant to be colonial territory of the German Reich. Decades later, sovietologist and geostrategist, Zbigniew Brzezinski, once a National Security Adviser to US President Jimmy Carter, stated in his 1997 book – The Grand Chessboard – that Ukraine is “geopolitical pivot” and that “without Ukraine, Russia ceases to be a Eurasian Empire”. All these geopolitical concepts pointed to Ukraine and other countries in Central and Eastern Europe as pivotal in the games of Great Powers and those who are propping them behind the scenes…