The Ural Mountains run north to south through western Russia. The range runs from the border of the Arctic Ocean in the north all the way to the Ural River in the south. It is known as the primary physical boundary separating Asia from Europe. The Ural Mountains are a valuable feature in Russia as they are the source of a number of natural resources including coal, metal ores, and precious stones. The Ural Mountains are not only known for their resources or their label as a physical barrier, however. They are also known for some fascinating recovered ancient artifacts and historical evidence, including the Ural pictograms. The Ural pictograms are rock art estimated to be from over 5,000 years ago and contain incredibly interesting information. In fact, the information they contain is so interesting that some theorists have actually speculated the existence of a technologically advanced community having once lived in these mountains, or even visitation from extraterrestrials with more advanced electronics than ourselves. 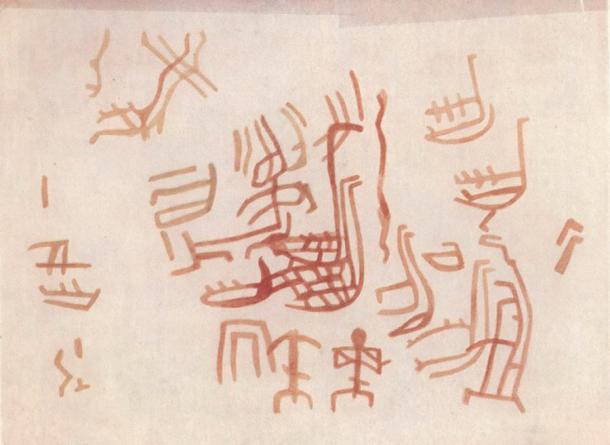 A closeup of one section of one of the Ural pictograms showing people and other things. (Данила Дубровский /  CC BY-SA 3.0 )

The Ural Pictograms Were Discovered in the 1600s

These pictograms of the  Ural Mountains  are located at the banks of several rivers, including the Tagil, Neyva, Yurozan, and Rezh. They are thickly painted in various colors, ranging between lilac and dark brown. It is believed that they were painted with a mixture of ochre (a natural brown earth pigment) and blood, with ratios between the two ingredients varying to produce different shades. For example, more blood would result in redder pigments, while more ochre would result in lighter brown shades. It is unknown if other pigments were involved in the making of this paint.

The contents of the Ural pictograms are the most interesting part. Most of the images are of various animals such as birds,  moose, snakes, and deer. Some also display bears and even show differences between species of waterfowl including  geese and ducks . Interestingly, some of these animal images are so detailed that they include anatomical diagrams showing the animals’ skeletons and organs. This may have been an informational way to help hunters dissect animals or even could have been an early way to illustrate animal  anatomy for farmers needing to treat animals that became injured. It could have also simply been a way to record early scientific research being done on the anatomy and physiology of various animals.

Beyond the animals are images of humans and their various hunting tools. Interestingly enough, there is little evidence of  fishing devices  being used as a tool to gather food, even though the pictograms are next to several waterways. Not a single fish can be found amongst the many human and animal pictograms found in the Ural Mountains, and only a few shapes are considered to possibly be fishing nets, though it is unconfirmed. Humans standing, running, dancing, and using weapons such as spears are common throughout the rock art of the Ural pictograms.

The most interesting images in the Ural pictograms, however, aren’t humans, animals, or weapons. The most interesting illustrations are the ones depicting various  geometric figures  such as interconnected pentagons, hexagons, and other shapes and lines. Modern-day researchers have found that these geometric images are uncanny in similarity to the chemical structures of various elements and compounds.

Vladimir Avinsky, a Russian atomic, molecular, and optical physicist began to study the Ural pictograms recently to compare them to existing chemical structures and formulas. He finds that the images bear a striking resemblance to the chains, polygons, and other shapes used in chemical compounds in organic chemistry. A frequently found shape amongst the pictograms is a “ honeycomb” structure. Some say these “honeycombs” may be illustrations of actual honeycomb, but some, like Avinsky, believe they represent chemical structures.

Though the Ural pictograms appear to represent chemical structures, it is unknown how they would have known the chemical makeup of various compounds. As of now, there is little to no evidence beyond the pictograms that would explain how ancient Russians over 5,000 years ago would have been able to determine these chemical makeups. While some chemists and archaeologists theorize that ancient civilizations may have had advanced technology beyond what we already know, others, including Avinsky, believe this information may have been given to indigenous civilizations from extraterrestrials visiting earth.

This answer may sound extreme, but a look into the actual chemical compounds themselves as well as additional evidence for extraterrestrial contact provides more insight on this belief. 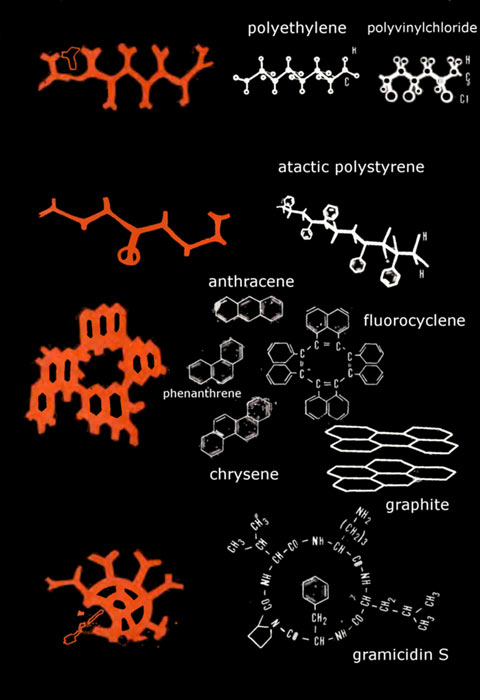 The Ural pictograms display multiple different polygon structures throughout nearly the entire 800-kilometer (500-mile) span of illustrations. Some of the clearest and most curious drawings are nearly identical to the chemical makeup of a few common compounds. The most common compounds that can be identified from the pictograms include polyethylene, atactic polystyrene, graphite, and gramicidin S. There is also evidence for compounds such as anthracene, chrysene, fluorocyclene, and other similar chemicals.

The uses for these chemical compounds are quite interesting.  Graphite has a history of being used as both a writing utensil and a refractory material in making weapons. It is also now used in making lithium-ion batteries, graphene technology, and as a semi-conductor. Polyethylene is the most common plastic in the world and is used in a number of different objects including plastic bags, fuel containers, water bottles, and much more. Gramicidin S, on the other hand, is a common antibiotic that works to kill gram-positive and gram-negative bacterial infections. It is also capable of killing some fungi species.

If indigenous peoples in the Ural Mountains were capable of understanding the chemical makeup of these compounds, it is possible that they would have used them in various technologies within their civilization. Graphite could have been used in writing utensils or advanced technology. Polyethylene could have been used to create various objects and structures needed for everyday life. Gramicidin S could have been used to treat bacterial and fungal infections in different parts of the body. But what evidence, if any, is there to support any of this? Historical analysis of the people living in the Ural Mountains may give us more insight. 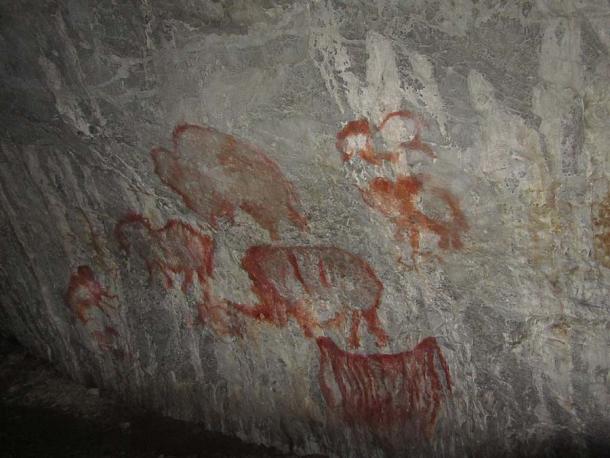 The indigenous peoples living in the Ural Mountains at the time of the Ural pictograms production are all part of several different groups. In the north live the  Nenets in the Pay-Khoy region, while towards the mid-south region of the mountains are the Komi, Mansi, and  Khanty people. The largest indigenous group in the Ural Mountains is the Bashkir, a people who reside in the southernmost part of the mountains. These groups are all settled now, with the northernmost groups still living traditionally via fishing, hunting, and reindeer raising.

The indigenous groups within the Ural Mountains nowadays only make up about one-fifth of the total population of the Urals. The other four-fifths consist of modern-day Russians who do not stem from these indigenous groups. Both modern and indigenous peoples in the Urals participate in traditional lifestyles including hunting and fishing. They also frequently utilize many of the resources offered in the Ural Mountains including magnetite, titanium, chromite, gold, platinum, and other ores and precious stones. These high amounts of mineral resources have led some areas of Ural civilization to capitalize on mining, machine building, and metallurgy as primary jobs in the region.

Given all of these resources, it is likely that the ancient indigenous peoples of the Ural Mountains would have used many of these chemical compounds in building and trade. If they knew exactly what the materials were that they were working with, it would have helped them in developing new tools and resources with them. However, there is unclear evidence regarding specific machinery or physical ability to determine the chemical makeup of any of these materials in the history of the Urals. While the ancients may have used this plethora of resources, it is uncertain if they had the ability to determine any of its chemical makeup. One discovery, however, suggests it may be possible. 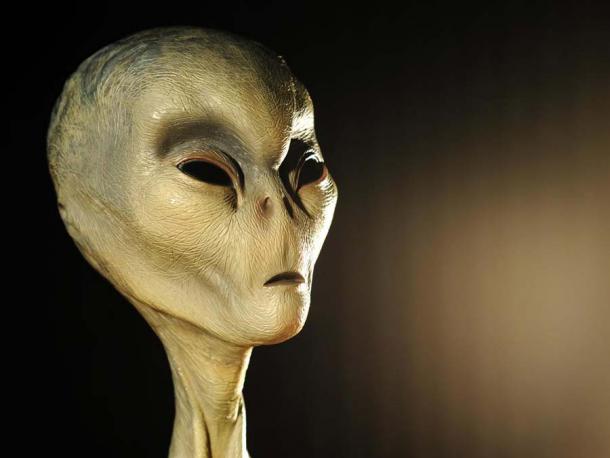 Some researchers have claimed the Ural pictograms were made by aliens because of their advanced nature. ( Seti Institute )

Those still believing in the Ural pictograms and their resemblance to chemical structures point towards another interesting  discovery in the Ural Mountains  that they believe may be related to the pictograms. In the early 1990s, a group of archaeologists discovered a group of nanostructures determined to be nearly 300,000 years old based on their depth of discovery. These nanostructures are made of a combination of copper, tungsten, and molybdenum depending on the size of the specific piece.

These nanostructures raise many questions for archaeologists, as further examination shows that they are small technological pieces including coils, shafts, and spirals. The details of these nanostructures are so intricate that researchers are confident that they were manufactured, machine-made pieces that could not appear naturally in nature. In addition, the depth at which they were found confirms that they are too old to be remnants of any recent technological development such as rocket launches or nearby planes.

This discovery again resulted in split beliefs. While some believe they are proof of technology more advanced in the Urals than previously anticipated, others believe they are evidence of a visit from  extraterrestrials.

Had extraterrestrials visited nearly 300,000 years ago, they may have left behind debris from their UFOs or other alien technology. Those that don’t believe the alien theories say it is possible that indigenous Ural civilization may have been intelligent enough to develop these machines and tools. If that’s true, it may be possible that ancient Ural people  were capable of analyzing the chemical makeup of their resources, which could ultimately explain the Ural pictograms. 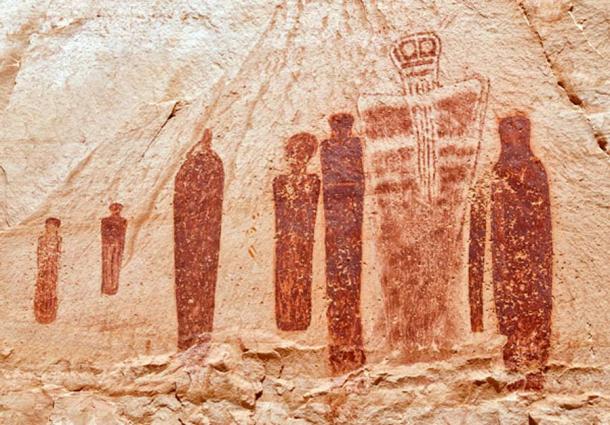 Which Came First: The Alien or the Pictogram?

So, are the Ural pictograms a sign of an extraterrestrial encounter on Earth? Or are they evidence of a significantly scientifically advanced civilization that is no longer? Or are they neither, and are the early abstract paintings of an indigenous artist, fascinated by angles and neat figures? With the little evidence we’ve found for each of these possibilities, we may never know the full truth behind the Ural pictograms.

What we do know paints an interesting picture for archaeologists, researchers, and conspiracy theorists alike. The existence of intricate nanostructures in the same place as these potentially scientific pictograms leads some to believe they may be connected. Though there is not enough substantial evidence currently to come to a definitive conclusion, future research may result in more evidence coming to light regarding these fascinating discoveries. Only then will we be able to determine the truth: aliens or humans?