For centuries, it has been believed that the large piece of skin nailed to the door of St Botolph’s church in Hadstock near Cambridge in England was human skin that belonged to a Viking raider who tried to plunder the church, but new research reveals this is not the true story.

Turns out, there is little substance to the Viking skin myth as most doors were actually covered with animal hide according to Cambridge scholar Ruairidh Macleod and his colleagues in their presentation at the UK Archaeological Sciences Conference 2022 (UKAS).

The renovation of Hadstock’s St Botolph’s church in the late 19th century revealed that the door had a large piece of skin under its metal bands. A local myth accounted for it as being from a would-be Viking pillager of the church in the 11th century AD. He had been flayed alive and a piece of his Viking skin nailed to the door to serve as a grim warning to other looters according to the legend, reports IFLScience.

What’s more, St Botolph’s isn’t the only church that sports this bizarre deterrent. According to New Scientist there are at least four known instances of medieval churches in England that display these so-called Viking skins or daneskins. Although St Botolph’s is the most well-known example, St Michael and All Angels Church in Copford, near Colchester, and Westminster Abbey are also similarly embellished. 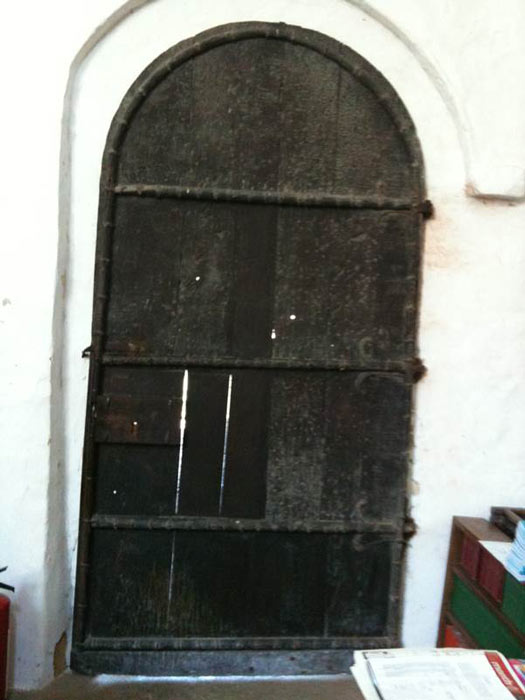 The interior vertical gaps of the church door at Hadstock where the Viking skin once covered the door’s exterior according to myths that date back nearly 1,000 years. Now we know that the skins were actually animal skins, but even that’s bizarre on a church door! ( Sir Gawain’s World )

For some time, the debate about these patches of skin, long believed to be Viking skin or human skin at the very least, has been growing among scientists. Scientific tests on samples have given inconclusive results.

In the 1970s, for example, Ron Reed, an expert on leather from the University of Leeds in the UK, examined the St Botolph’s skin. Not only did he endorse the human skin legend, but Reed also specified that it likely came from a person with fair or greying hair.

A subsequent DNA analysis during the BBC program Blood of the Vikings in 2001, pointed to the skin being that of a cow. However, there was a question mark on the accuracy of the results.

Macleod and his colleagues analyzed the skin fragments from all four church doors using a non-destructive technique called “Zooarchaeology by Mass Spectrometry” or ZooMS. Notably, the technique has helped scientists pick a single Neanderthal bone from among 2,300 bone fragments belonging to animals like mammoths, woolly rhinos, wolves, and reindeer in Russia’s Denisova Cave .

The technique reveals the collagen peptide sequence in bone fragments, allowing scientists to identify to which species a bone once belonged. Macleod and his team rubbed the skins with rubber erasers and then extracted the trypsin-digesting peptides that adhered to the eraser waste.

They found that none of the four skin samples belonged to a human. While the St Botolph’s and Westminster Abbey ones came from bovines, the St Michael and All Angels Church skins belonged to a horse or donkey. Because both these species have very similar collagen fingerprints , any further pinpointing wasn’t possible. 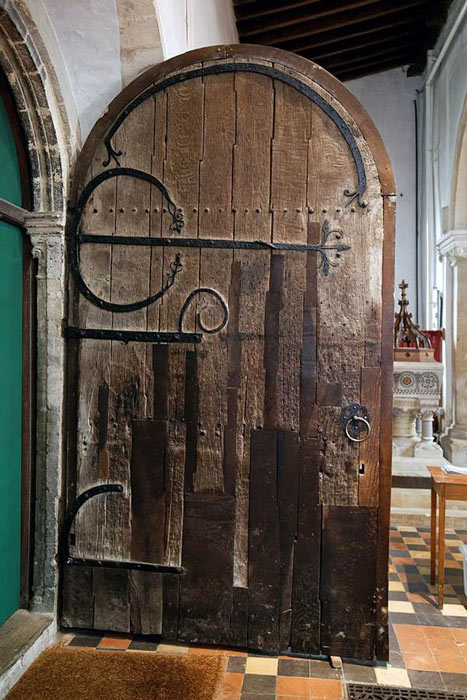 The over 800-year-old south door with decorative ironwork in St Nicholas’ Church at Castle Hedingham in Essex, England. The door is known locally as the Skin Door, as it is supposed that a caught church robber had his skin nailed to it. Historically there is a custom, dating to the Dane wars, of nailing a Daneskin to doors according to the St Nicholas Church guide. (Acabashi / CC BY-SA 4.0 )

Ancient Myths About Viking Skin or Human Skin in England

The Viking skin or daneskin myths predate the discovery of the skin at St Botolph’s during its 19th-century renovation by centuries. It isn’t a case of fitting it to the fact of the skin being discovered. Macleod told IFLScience, “So, it’s interesting that very convergent myths seem to have arisen for all the churches that we analysed that the skins originated from Danish (Viking) raiders . Specifically, this is first attested by Samuel Pepys in his diary in 1661, so the idea that these are flayed human skins from Danes has been around for a long time.”

“In the absence of any samples actually proving to be human, it looks like this story might have originated for one of the churches as a local myth first (the accounts for Hadstock and Westminster are among the oldest), and then spread to others quickly where traces of desiccated skin were also found nailed to the door,” he added.

The 12th-century artist, Theophilus, writes that the practice of nailing treated animal hide to church doors had an aesthetic purpose. “Nonetheless, the morbid fascination associated with this myth likely explains its persistence, as well as serving as deterrent to would be church-desecrators!” Macleod told IFLScience.

The study by Macleod and his team seems to have settled the rather gruesome church-door-skin debate once and for all. The bizarre medieval practice of using skin on church doors in England was nothing more than a clever way to prevent church looting, and Viking skin worked best to warn off villains at these four notable ancient English churches.

Top image: Viking skin or Daneskin and a hinge taken from the door of St. Botolph’s church in Hadstock, near Cambridge, in the UK. A recent study has revealed that all the famous Viking skin doors in England did not use human skin at all, but the myths were too powerful and the science too primitive to prove otherwise. Source: Saffron Walden Museum