Idanre Hill, also known as Oke Idanre, is a remote town located in the southwestern Nigerian Ondo State. Though the area boasts several cultural landmarks, it is most famous for its landscape atop an igneous batholith that is over 500 million years old. These massive stones, often called the Idanre Boulders, appear as massive mountains amongst the grassy landscape of Idanre Hill. They are also the home of nine other natural wonders, all of which attract hundreds of tourists to the remote community every year.

The region is also fascinating due to the people who live amongst the giant boulders of Idanre Hill. These people have resided there for several thousand years, untouched and uncontacted by Western civilization until the late 1800s. After the Western world contacted it, it began to slowly adapt to more modern times. Specifically, the majority of the population in Idanre Hill has since moved downhill from its previous location, where they had moved to protect themselves from attacks several decades ago. 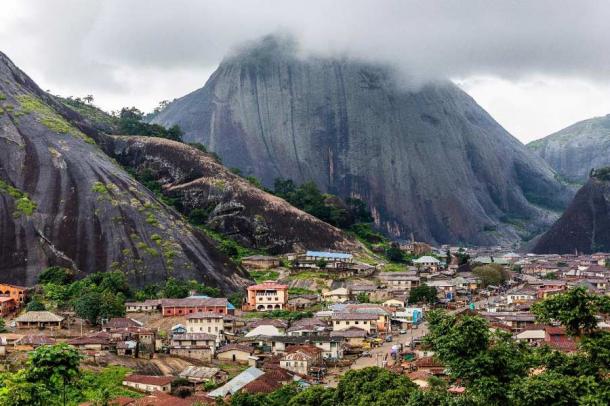 According to the historical evidence, Idanre Hill has made an excellent home for its people for centuries, likely due to the privacy and protection the Idanre Boulders offer them. As such, the culture of the Idanre people frequently revolves around these boulders and the legends behind them, with every legend having an ancient and fascinating background. But what do we know about the people of Idanre Hill, and how were the Idanre Boulders formed in the first place?

The majority of the population in Ondo State (and Nigeria as a whole) is made up of the Yoruba people. The Yoruba people are a West African ethnic group with their own language of the same name. Their origins can be traced back all the way to the 7th century, and by the 8th century they ruled a kingdom in Ile-Ife, now known as an ancient Yoruba city of over 500,000 people. Ancient legend says that the Yoruba people originated in Ile-Ife from a man named Oduduwa, whose descendants spread out from the region to establish Yoruba communities throughout Africa. Some even suggest that this was the origin of all humanity, and that all people are descendants of the Yoruba people.

Historically, the Yoruba were known for their early urbanization as well as their architectural abilities in such early centuries. Beyond their architectural abilities, the Yoruba are known for their other forms of craftsmanship, including blacksmithing, weaving, glassmaking, leatherworking, ivory carving, and wood carving. These abilities make Yoruba regions particularly wealthy and self-sufficient, including within the Yoruba territory in Idanre Hill. The Idanre Hill Yorubas have taken advantage of the region for centuries, using the rocky terrain for blacksmithing and carving as well as protection from the elements. 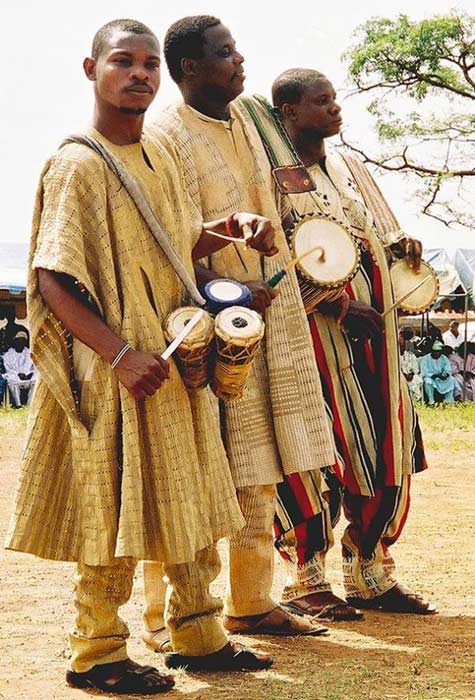 Most of the Yoruba community in Idanre Hill worshiped various idols and gods before the late 1800s. Evidence of these idols can be found in stone statues throughout the community, though they are now seen as cultural artifacts and are not worshiped as often anymore. This change in religion is a result of the work of Gilbert Carter, a reverend that arrived in Idanre Hill in 1894. Carter brought Christianity to the region through his team of missionaries, and they helped build the first Idanre primary school in 1896. The historic clay building is called the Igbo Ore school, and is still standing to this day. As a result of his work, most citizens of Idanre Hill now identify as Christians.

Over the last several centuries, the Yoruba of Idanre Hill have taken great care to not deplete the hill’s natural resources. The natural fauna and flora have been mostly left undisturbed, and the area is still home to several endangered species which the locals strive to protect. Occasionally, festivals are held on the hill to celebrate the people and the culture of Idanre Hill, such as the Ogun festival, a Yoruba celebration of the spirit of metalwork, and the Ije festival, a Yoruba festival celebrated over seven days. During the Orosun festival, the locals give tribute to Orosun, the goddess of children, and go to the shrine to fast and pray. This festival is especially important, as Orosun was also known as the sister-in-law of Oduduwa, who, as previously mentioned, was the father of the Yoruba people. 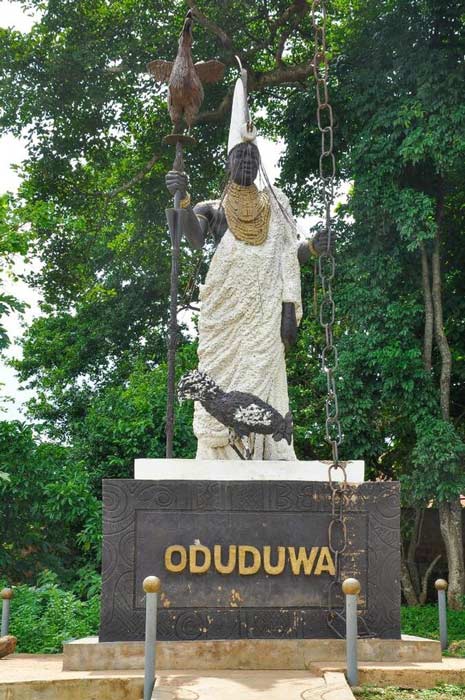 The historical point where Oduduwa, the legendary progenitor of the Yoruba race landed via a chain to found Ile Ife. It is also known as his final resting place. (The_AyeniPaul / CC BY-SA 4.0 )

Nowadays, the region is ruled by its Owa, Oba Dr. Fredrick Adegunle, Aroloye IV. He has been the primary ruler over Idanre Hill since 1976, a few years after the passing of his father, the previous Owa. His goals for Idanre Hill include putting it on the map globally. As tourism to the area has increased due to the attraction of the boulders and other natural wonders, the economy of Idanre Hill has significantly grown. In the future, he hopes for the region to continue growing in wealth so the Yoruba who live there can thrive even more fully.

The Birth of the Boulders

As previously stated, Idanre Hill resides on an ancient batholith. Batholiths are areas of massive boulders of intrusive igneous rock which are formed by cooled magma in the earth’s crust. When magma rises from the crust, it can come into contact with already formed native rock on the surface, called country rock. This magma then pushes the rock upwards, causing formations such as batholiths. It is important to note that batholiths are not individual hills – a batholith makes up at least 40 square miles (103.6 sq. km) of plutonic rock. Any smaller than this and it is considered a stock.

Batholiths experience great environmental changes throughout their creation. Compared to the magma’s position at the center of the Earth, the surface of the Earth has much less pressure than within the crust. Because there is less pressure, the physical crystal structure of this now-hardened magma slowly expands over time. As this crystal structure expands, the rock undergoes a type of weathering called exfoliation. Exfoliation causes some of the sheets of rock to fall off the surface of these large boulders, resulting in the smooth, rounded boulders seen within batholiths such as Idanre Hill.

These large, smooth boulders have done the Idanre community much good over the last several hundred years. The height of the boulders has often protected them from outside attack as well as certain environmental threats such as bad weather or predators. There is so much respect for the rocks that each rock in the region has its own name, examples of which include Ojimoba, Ota Ebo, and Ilaran.

Since this batholith in particular is over 500 million years old, time has caused some of the boulders to crack down the middle, creating deep valleys or canyons in the rocks. Others, however, remain uncracked, still looming over the community at over 3000 feet (914.4 meters) high. Over the years, the Yoruba have created paths up these boulders and through their valleys to carry resources and travel easily. This also gives tourists an easier time accessing some of the beloved natural wonders hidden amongst these famous boulders.

Beyond the boulders themselves, Idanre Hill attracts tourists for nine other fascinating “wonders.” The first of these is Ibi Akaso, also known as “The Great Steps.” These 660 steps lead up to the top of the hills, where one can look down on the impressive community below. There are several stops every few hundred steps where one can rest and drink water as needed. Three other wonders are related to Agboogun, a supernatural hunter from ancient lore. On his supposed journey, he carved hieroglyphs on two of the hillsides, and also struck his foot against one of the rocks, leaving a deep imprint referred to as “Agboogun’s Footprint.” 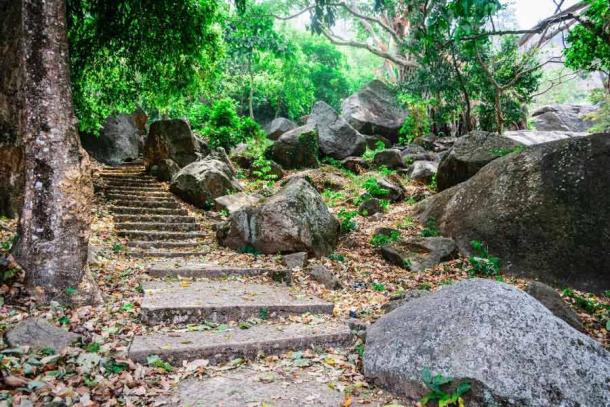 Another wonder is the Omi Aopara, a spring that roughly translates to “Thunder Water.” It is believed that warriors headed out to travel would stop at the spring for a drink. If thunder rumbled as one drank, it indicated that they would die in battle and they were often left behind to prevent this death from occurring. Agboogun’s memorial spot is near this, and is used once per year for the Owa to display himself wearing his crown in remembrance of Agboogun de-throning a prior king. The Orosun Hill is outside and contains the Arun River. This hill is named after Orosun, the goddess of children and a female warrior, and her Arun River reputably has healing powers for those who drink from it. 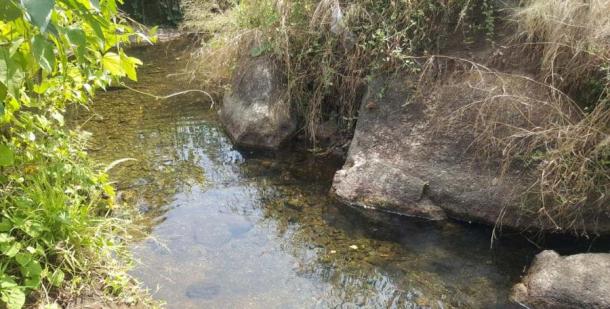 Finally, one of the most interesting of these wonders is The King’s Palace, an ancient palace with three separate entrances. The palace has a courtyard with multiple carved stone figures adorning the area. Part of the palace is enclosed within one of the mountainsides, and is only accessible through the chief’s quarters. This was allegedly done purposefully for safety and security purposes in case of a foreign invasion. It is one of the most visited buildings by tourists visiting Idanre Hill. 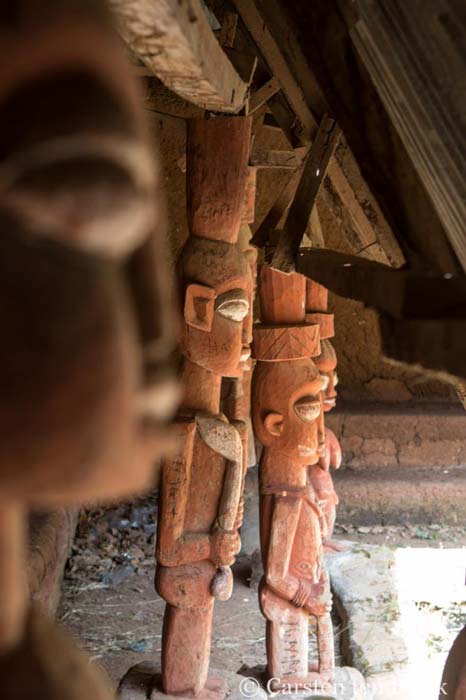 As of 2007, Idanre Hill is a contender to be a UNESCO World Heritage Site. The United Nations Educational, Scientific and Cultural Organization (UNESCO) is known for its work in preserving global landmarks with cultural, historic or scientific significance. In 2007, the National Commission for Museums and Monuments nominated Idanre Hill for protection and conservation under the cultural category. While there have not been any updates since then, it is still under consideration for future assistance.

Supporters of the region becoming a UNESCO World Heritage Site have hope that this nomination will someday be approved. As of now, it is possible that an increase in tourism has created reluctance in those able to make the approval, since Idanre Hill’s economy is flourishing with increased tourism. On the flip side of the coin, many hope that this reluctance disappears so that the natural fauna and wildlife in the region can get the protection they need to prevent further endangerment or extinction. 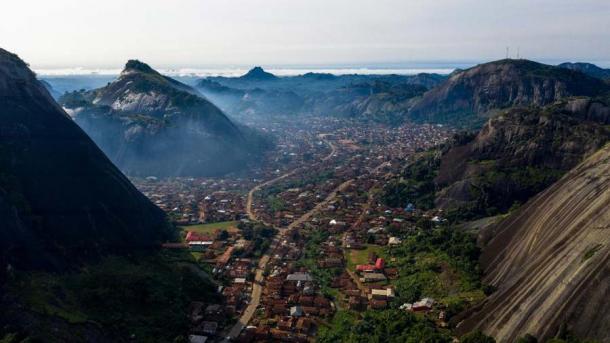 In the meantime, the region is still open to tourists looking to view the famous Idanre Boulders or any of the other local nine wonders. The site is also becoming more popular amongst filmmakers, already having been used as a setting for at least one movie. It is also the location used as inspiration for Nigerian playwright, novelist, poet, and Nobel Prize recipient Wole Soyinka’s book, titled “Idanre and other Poems.” Within this poem, Soyinka carefully and artfully describes the niche community, with its massive boulders and incredible wonders, beautifully:

Home of the Iron One

The sun had built a fire within

Were all aglow with Earth’s transparency…’

Ogundiran, A. (2021, December 10). A long view sheds fresh light on the history of the Yoruba people in West Africa . The Conversation. Retrieved April 14, 2022, from https://theconversation.com/a-long-view-sheds-fresh-light-on-the-history-of-the-yoruba-people-in-west-africa-162776#:~:text=The%20Yoruba%20are%20among%20the,history%20have%20attracted%20numerous%20studies