The remains of 42 syphilis-ridden, colonial Spaniards have been unearthed at a 500-year-old hospital in Lima. But it’s suspected that beneath these poor afflicted souls, might lie the lost mummified bodies of the three last rulers of the Inca Empire.

Lima, the capital city of Peru, is located on the country’s arid Pacific coast and represents one of the largest population centers in South America. The city was founded with the building of a church on January 18, 1535, after Spanish conquistador Francisco Pizarro had successfully subdued the Inca population.

The city’s foundation date, January 18, 1535, marked the 16th-century Catholic ‘Epiphany’ holiday, celebrating the Three Kings visiting baby Jesus. Therefore, Lima became known as Ciudad de los Reyes, the “City of the Kings” and the capital of 16th-century Spanish Peru. It was at a site downtown that archaeologists discovered what is probably Lima’s first hospital, and the unfortunate Spanish syphilis patients.

The Hospital Real (royal) of San Andres was founded only 20 years after Pizarro established the city of Lima. The story began when Francisco de Molina selflessly cared for poor patients through the 1530s and 40s at his home in the modern Barrios Altos area of Lima. The Peruvian hospital was formally founded in 1552 AD by Spanish viceroy , Andres Hurtado de Wildoso, after whom it was named. Today, this historic building is one of the oldest hospitals in Peru, and one of the oldest in the Americas.

Having slowly risen to the surface over five centuries, most of the 42 bodies were discovered only 30 centimeters (12 inches) beneath ground level, in a courtyard cemetery next to the 16th-century Spanish hospital. Within the sepulchral structure the researchers also discovered and mapped “a pharmacy, a psychiatric ward , a walled garden and the burial ground.” They also discovered fragments of ceramic bowls, containers, and bottles wrapped in cotton wool. 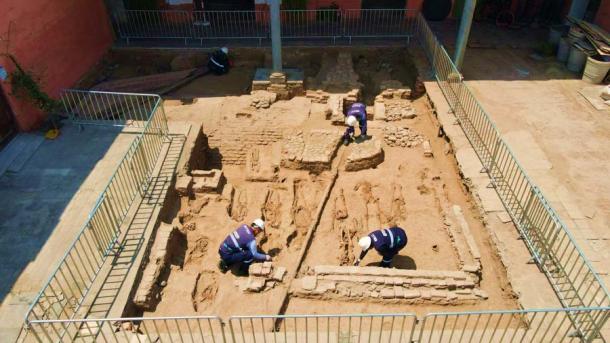 Héctor Walde, chief archaeologist for the Lima municipality, and his team of archaeologists discovered a copper cross on a chain around the neck of one of the male skeletons. This was a form of spiritual protection against the devilish disease that was discovered in most of the bodies: syphilis. This sexually transmitted disease is caused by the Treponema Pallidum bacterium. And while we are all taught at school that Spaniards brought syphilis to the new world, The Columbian hypothesis states that navigators in Columbus’ fleet “brought the previously unknown affliction back to Europe on their return from the New World in 1493 AD.”

Whatever the origins of syphilis, Christians in the new world rightfully associated it with sexual promiscuity, and therefore, with the devil . And with the new Spanish city of Lima awash with syphilis it is no wonder Professor Walde said “the ritual and religiosity in Lima was very strong.”

In fact, so strong were beliefs in the protective powers of the crucifixion tool of Christ that the Hospital Real de San Andrés was designed in the shape of a cross, with its altar located at the very center, a location symbolic of the heart of Christ. Therefore, this church is a wonderful example of 16th-century architectural sacred geometry in a sacred healing context. 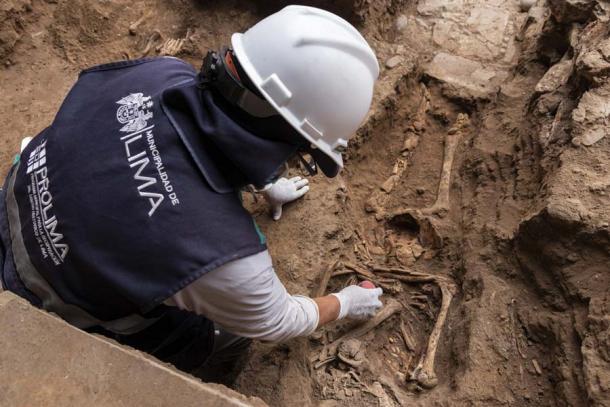 An archaeologist from the City of Lima slowly cleaning one of the syphilis-ridden Spanish remains at the colonial hospital in Peru that was first built two decades after Pizarro took over the Inca Empire. ( Municipalidad de Lima )

Are The Three Lost Royal Inca Mummies Beneath The Spaniards?

While the story of the 42 syphilis ridden bodies is grabbing media headlines, the researchers also identified an “underground crypt containing pre-Hispanic Inca ceramics.” And while all of the bodies recovered so far belong to mostly male immigrant Spaniards, according to a Daily Mail report Walde believes the site might contain the “mummies of the last three Inca kings, Pachacutec, Huayna Capac and Tupac Yupanqui.”

Let’s get something clear here. No matter what you read out there, there were no kingdoms or “kings” in Pre-Columbian Peru. The word “king” was a European thing. The sovereign ruler of the Inca Empire was called the Sapa, which in the Quechua language of ancient Peru meant “son of the Sun.”

Héctor Walde told the Associated Press that 16th-century Spanish chroniclers noted that three mummies were sent from Cusco, the capital of the Inca Empire, to Viceroy Andrés Hurtado de Mendoza in Lima.

However, Walde indicated caution, saying several archaeological research projects over the last 200 years have failed to locate these three royal mummies. It is pure speculation that the three mummies are at the Lima hospital site. However, there weren’t that many administrative buildings in the area at the time, and the thinking is that these lost three Inca Sapas are hidden somewhere beneath Lima.

Top image: A skull of one of the Spanish syphilis patients who died in Lima’s fist hospital that was built just 20 years after Pizarro took over the Inca Empire.Source: Municipalidad de Lima