Archaeologists in western France have been up to their elbows excavating enormous oak ship timbers at a “surprise” 10th-century medieval port, where evidence of wine production, fishing trade, and long-distance economics have been unearthed.

The 2,500-square-meter (26,000-square-feet) archaeological dig surrounds the famous medieval castle of Chateau Talmont-Saint-Hilaire, in the Vendée department of western France. Large, extremely well-preserved beams of oak were discovered along an ancient riverbank that featured a gutter system.

A report in Connexion France says the team of archaeologists believe they have discovered “a 10th century port.” This conclusion was drawn considering the site’s proximity to the Atlantic coastline, which is today less than three kilometers (1.9 miles) from the site. 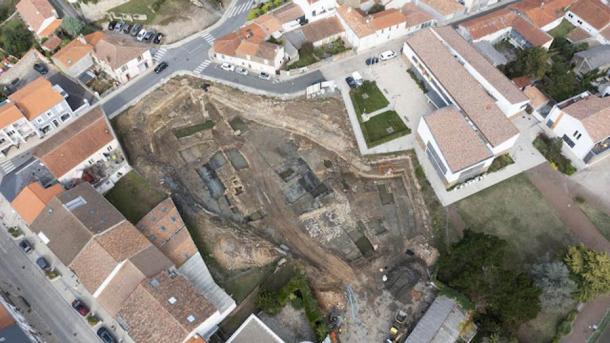 Aerial view of the medieval port excavation area in the village at the foot of France’s Chateau Talmont-Saint-Hilaire. (Emmanuelle Collado / Inrap)

How Trees Dated The Surprising Medieval Port in France

The researchers from l’Institut national de recherches archéologiques préventives (Inrap) have announced findings including evidence of wine production and a thriving fishing trade. It is thought that merchant ships docked at the site and loaded up with cargoes of both people and goods, shipping them to and from the chateau to England and Spain, between the 10th and 16th centuries AD.

FranceInfo spoke with Pierre Péfou, a medieval carpentry specialist , who said the oak beams were in “exceptionally good condition.” So much so did the deep-terrestrial humidity at the site protect the oak timbers that the archaeologists were able to identify “very precise dates” for the site. Péfou explained that cross sections of the oak beams revealed visible rings that were then analyzed to reveal dates for different periods of maritime operations. 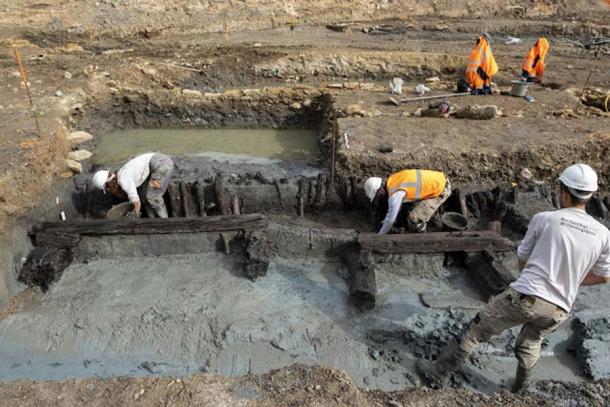 Excavation of stone and wooden structures of the medieval port at the foot of the castle. (Emmanuelle Collado / Inrap)

So accurate have modern analytical methods become that the team of scientists were able to ascertain whether any given oak beam sample had come from a tree that had grown slowly or quickly. They could also identify trees that had been pruned. They could determine if a tree had grown from the shoot of a cut tree stump, or from a seed.

Perhaps the most interesting data pertains to how human activity affected tree growth within the surrounding natural environment. Now, with all this new eco-information, the researchers are recreating the forested countryside as it was in the medieval period.

Archaeologist Stéphane Augry said discovering that the site was a medieval port answered several outstanding archaeological questions. It was always a mystery why the huge stones that were selected to build the chateau had originated in a quarry some four kilometers (2.5 miles) distant. However, this all makes much more sense knowing the stones had most probably been transported by ship. Augry told Connexion France that shipping stones was a cost effective means of transporting large quantities of building materials in one go, or shipment. 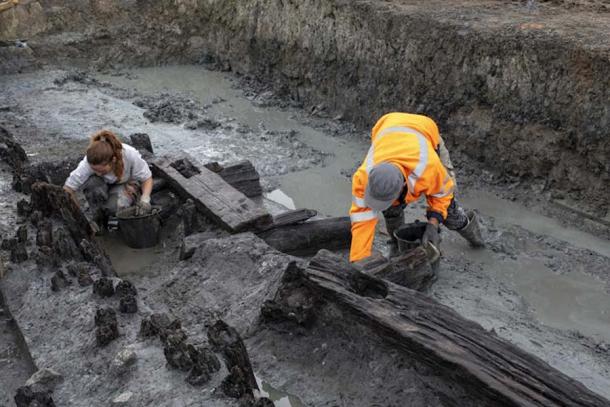 Inrap researchers digging into the surprise find below the chateau which had been land locked for so long no one imagined it was built on the water. (Emmanuelle Collado / Inrap)

From Grapes To International Pilgrimage Routes

Less than a decade ago the team of archaeologists would have announced only that they had found evidence of “ grapes,” in the most generic sense. But now, in the age of quantum-microscopy, the samples gathered from the site showed not only the presence of the prized fruit that ultimately becomes wine, but detailed evidence of wine production. Collections of grape vine stems were found that had been separated from the fruits. Moreover, freshly crushed grape juice was discovered with the constituent fruit’s still having their skins-on, and seeds in.

One question remains: how then, did the archaeologists manage to get from detailed evidence of the production of wine to a conclusion including international trade? This was deduced after the researchers studied one of the tiniest artifacts discovered at the site. A metal pilgrim’s medal or badge was found pressed among ship timbers, and this, according to the researchers, serves as evidence not only of fishing trade, but of long-distance economics .

You might think it’s something of a “leap” to rest an international conclusion on the origins of one metal pin, but with Richard I of England ( Richard the Lionheart ) owning the Château de Talmont between 1182 AD until his death, the singular pilgrim’s pin might even have royal British heritage.

Top image: Remains of the wooden wharfs of the French medieval port being excavated at the base of Chateau Talmont-Saint-Hilaire, Vendée, France. Source: Emmanuelle Collado / Inrap