For many years in an obscure back corridor of the Church of the Holy Sepulchre in the Old City of Jerusalem there was a large stone slab leaning against a wall. The eight-feet-by-five-feet (2.5 meter-by-1.5 meter) slab was covered with graffiti – messages in many languages left by Christian pilgrims who’d come to visit this holiest of holy sites.

But recent renovations at the Holy Sepulchre revealed something surprising about this seemingly unremarkable stone slab. When it was turned around so it could be moved, onlookers were shocked to discover that the back side of the slab was decorated with elaborate spiral or looped motifs beautifully carved into the rock.

After examining the striking images on the stone slab, researchers eventually determined that the rock had once been part of a medieval high altar. The altar would have been a centerpiece, put on display in a prominent location where it could be seen by all visiting pilgrims. The decorated side of the slab had actually been the altar’s face, and it was designed to evoke awe and wonder.

When first constructed, the altar would have included more than just the spiral imagery.

“You cannot see it now, but originally it was inlaid with pieces of precious marble, pieces of glass, pieces of small, finely made marble,” Amit Re’em, the Jerusalem regional archaeologist for the Israel Antiquities Authority, told Reuters . “It was shining, and this was a really amazing artifact.”

The other side of the graffiti covered at the Holy Sepulchre Church in Jerusalem revealed the awe-inspiring medieval spirals of the ancient altar backdrop. (YouTube screenshot / Reuters)

At the Church of the Holy Sepulchre, Only the Best Would Do

Professor Amit Re’em led the research on the stone slab’s true origin at the Church of the Holy Sepulchre in the Old City of Jerusalem . He was assisted in this work by Ilya Berkovich, an historian affiliated with the Austrian Academy of Sciences.

As experts in such matters, the two researchers were quickly able to identify the spiral or looping engravings as emblematic of the Cosmatesque architectural style. This style emerged from the innovative work of the Cosmati family, medieval Roman craftsmen who created beautifully decorated stone slabs for architectural projects in the late 12th through the mid-13th centuries. 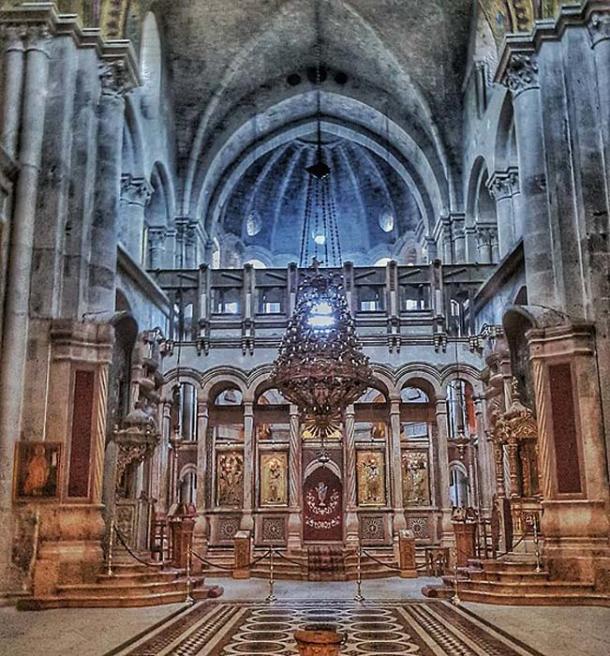 Current interior façade of the Church of the Holy Sepulchre ( CC BY-SA 4.0 )

The Cosmatesque style is known for its colorful, abstract geometric designs and carefully crafted marble ornamentation. It features finely cut marble tiles that are fitted into circular engravings in stone faces. As a truly cosmopolitan artistic innovation, Cosmatesque incorporates themes and motifs from Classical, Byzantine, and early Islamic art.

Stone slabs decorated in this striking and picturesque style were commonly installed in churches starting in the 12th century AD. They were used to make floors, walls, and altars inside sacred spaces across Europe. Many are well-preserved and still exist; perhaps the best-known Cosmatesque decorative stonework can be found on the high altar of Westminster Abbey in London. But the Holy Sepulchre altar is also impressive.

“It stood at the apex, at the sanctuary of the Church,” Re’em said, speaking of the elaborately crafted high altar. “All the eyes of the believers, of the pilgrims, [went] to this object. And right above it and around it, all the high priests, the priests and the monks of the church did all the liturgy, the main liturgy of the church, on the table, right here on the table of this altar.”

It was only appropriate for the Church of the Holy Sepulchre to possess such a spectacular altar. The Church was built to enclose both the Calvary (the place where Jesus Christ was crucified) and Jesus’s tomb, where he was lain before the Resurrection. The Church was constructed between 326 and 335 AD on the instructions of the Byzantine Emperor Constantine , who’d converted to Christianity only a few years before. Constantine sent representatives to Jerusalem to find the lost locations of the Calvary and the tomb, and their reports eventually convinced him that they’d succeeded in that mission.

Shrines surround each location inside church walls, and it is the presence of the two most sacred sites in Christianity that has kept pilgrims flocking to the church for so many centuries.

The uniquely elegant Cosmatesque decorative stonework motifs found on the other side of the stone slab found leaning against the wall in an obscure Church of the Holy Sepulchre corridor in Jerusalem. (YouTube screenshot / Reuters)

The Return of a Crusaders-Era Relic

Altars decorated in the same style have been found inside churches in Rome that were built in the 12th and 13th centuries, the researchers confirmed. Based on its decorative style, they have no doubt the altar prepared for the Church of the Holy Sepulchre was constructed and installed around the same time. Adding evidence to support this theory is the testimony of some pilgrims, who witnessed the installation of the main altar of the church in 1149, when Jerusalem was under the control of the Crusaders.

Amit Re’em says that the altar was originally used by Catholic clergy to celebrate mass. A few centuries later it was taken over by the Greek Orthodox Church , one of many denominations that have claimed the right to occupy the church and hold services there over the centuries.

In 1808 there was a huge fire at the Church of the Holy Sepulchre. While much of the damage to the structure was later repaired, it seems the decorated stone altar was taken down, set aside, and forgotten, with its stunningly attractive face turned to the wall. At some point the altar slab was repurposed as a graffiti board, as it sat against a back wall barely noticed by church leaders who would have wanted it fully restored if they’d realized its true purpose and significance.

Re’em and Berkovich’s findings will be published by Israel’s Exploration Society at the end of this year. In the meantime, the altar will be carefully cleaned so that restoration work can begin. Once this is complete, representatives of the multiple denominations who make use of the church will have to decide where and how they want it displayed.

Top image: The other side of this graffiti covered slab at The Church of the Holy Sepulchre in Jerusalem led to the discovery of the beautiful medieval ancient altar . Source: YouTube screenshot / Reuters