Archaeologists exploring sacrifice pits in a 3,000-year-old ruin have unveiled a Chinese treasure hoard consisting of almost 2000 relics of supreme cultural importance. However, the most important artifacts in this Chinese treasure hoard are two golden masks and a massive bronze figure deemed important enough that the site has applied for UNESCO World Cultural Heritage Status.

The Sanxingdui Ruins in Southwest China’s Sichuan Province are not only the most famous archaeological discovery in China, but according to a recent Global Times article, “in the world.” First discovered in 1929, the Sanxingdui site, which dates back to the Bronze Age, represents the largest elite site ever found in the Sichuan Basin.

Archaeologists exploring the site’s ancient sacrifice pits have unearthed a Chinese treasure hoard of enormous value, including hundreds of ivory and bronze artifacts, golden masks, and a massive bronze god statue that is so important that the entire site might be given World Heritage status.

The highlight of the most recent finds is a golden mask which was unearthed in one of the sacrificial pits in mid-June of this year. Xinhua reports that the mask “looked like a piece of scrunched paper and its shape was difficult to discern” when it was first discovered. But after a week of restoration work the stunning artifact was unveiled. 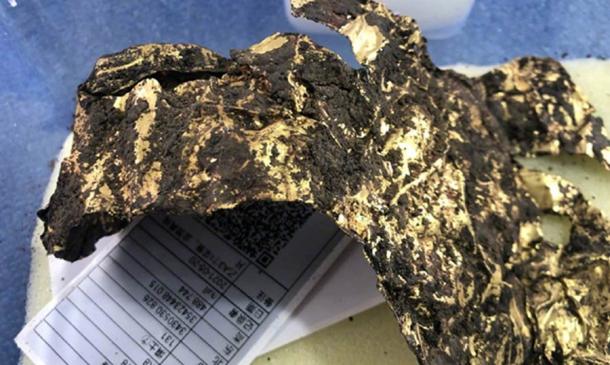 The golden mask weighs about 100 grams (0.22 pounds) and archaeologists believe that it would have been part of a larger bronze head at some point in the past. The mask is 37.2 cm (14.6 inches) wide and 16.5 cm (6.5 inches) high, and it is the most complete golden mask found at Sanxingdui to date, according to Xinhua.

Ran Honglin, a researcher with the Sichuan Provincial Cultural Relics and Archaeology Research Institute, says the mask depicts a “‘god’ of all worshipers at Sanxingdui” and “the facial features and size of the gold foil mask are similar to those of the bronze heads unearthed before. We figure that the mask was used to cover the bronze head, as opposed to being a stand-alone artifact.” 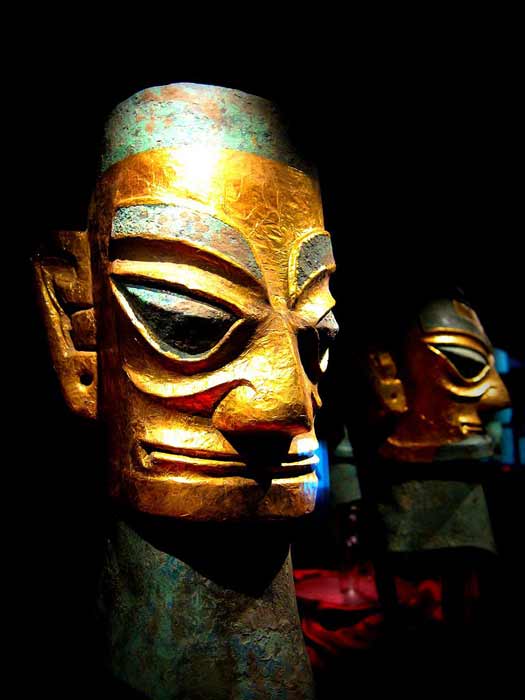 Though not from this year’s Chinese treasure hoard, this Sanxingdui bronze head wearing a gold foil mask is considered to be exceptional and of great importance. (momo / CC BY 2.0 )

This mask joins another partially destroyed golden mask which awed the world in March. That mask is estimated to be 84% gold and it measures 23 cm (9.06 inches) wide, 28 cm (11.02 inches) high, and weighs about 280 grams (9.88 oz.) The mask inspired a bunch of tribute videos and became a popular meme. It also sparked a theory…

South China Morning Post reports that the mask was considered so unique and with such strange facial features that some people began to suggest that the area was once inhabited by aliens. Wang Wei, the director of the Institute of Archaeology at the Chinese Academy of Social Sciences, debunked the claim saying:

“There is no chance that Sanxingdui belongs to an alien civilisation. These wide-eyed masks look exaggerated because the makers want to emulate the look of deities. They shouldn’t be interpreted as the look of everyday people.” 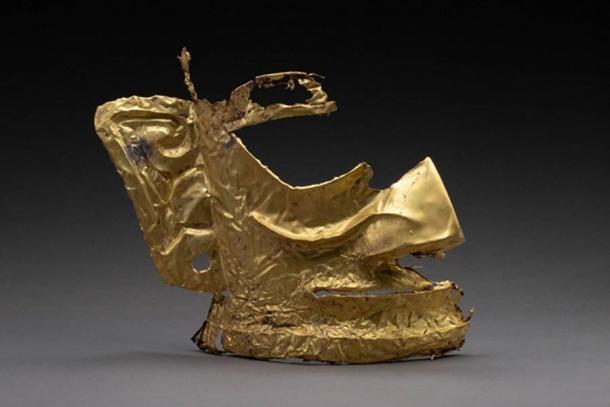 The partially destroyed golden mask unearthed in a sacrificial pit at the Sanxingdui ruins. ( LAODONG)

Hundreds of important cultural artifacts made of ivory, bronze, gold and jade have been unearthed from the site over the years. Furthermore, around 2,000 broken relics have been found in a series of six sacrificial pits. 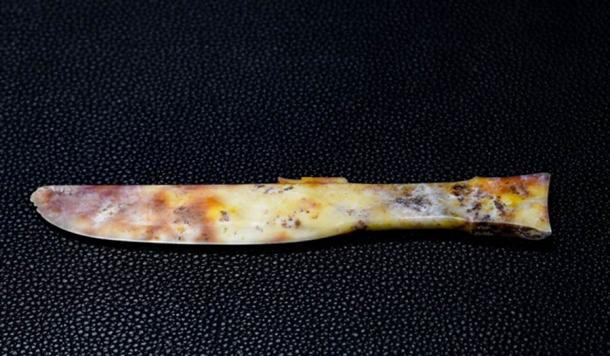 Tang Fei, chief of the Sichuan Provincial Cultural Relics and Archaeology Research Institute, told Xinhua that “The new discoveries demonstrate once again that imagination and creativity of the ancient Chinese far surpassed what people today had expected.”

As if this priceless Chinese treasure hoard wasn’t enough for one year, in Pit 3, a “1.15 meters [3.8 feet] high, 3,000-year-old bronze figure was discovered with a zun, (ancient wine vessel) on top of the head.” According to Global Times, this single artifact is being described as an “unprecedented cultural relic,” on a global scale. 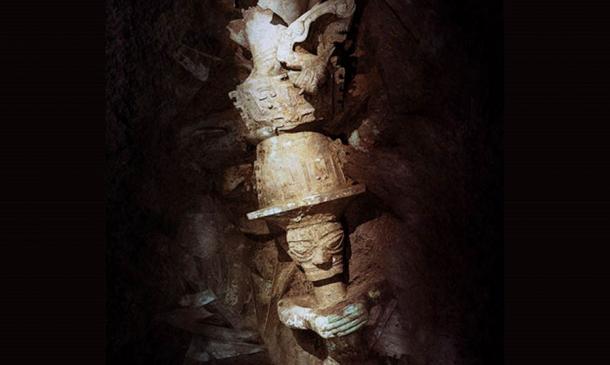 This bronze statue with a zun drinking vessel on top of it is considered to be important enough to request UNESCO World Heritage Status. ( CCTV)

In May, Tang Fei told the Global Times that his team had removed all of the ivory relics from the pits and they were focusing on a rare bronze statue. The upper part comprises a 55-centimeter-high (22-inch-high) broad mouthed bronze zun drinking vessel with dragon-shaped decorations , while the lower part is a 60 centimeter-tall (22-inch-tall) kneeling figure with something in its hands.

Further bronze-made relics were found buried underneath the layer of ivory relics , and Dr. Tang told CCTV these bronze figures reflect “sacrifice in the spiritual world of the ancient Shu civilization.” For this reason, he calls the discovery of the statue “a national treasure-level cultural relic.” 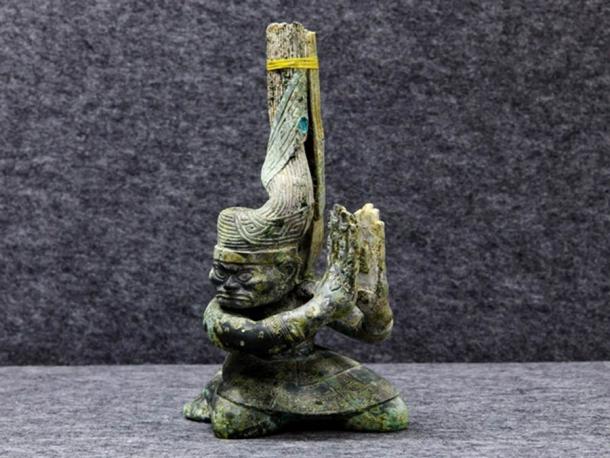 A head-turned kneeling bronze figure was discovered at the Sanxingdui ruins over the summer. ( Xinhua)

Already, as a result of the excavations of these sacrifice pits at the Sanxingdui Ruins site, archaeologists now know that fine silks were votively offered by members of the ancient dynasty, Tang said.

Tracing the Origins of the Chinese Relic Makers

Dr. Tang says the ancient Sanxingdui civilization has the characteristics “of the integration of Eastern and Western civilizations” and he theorizes that the culture was most likely based on the traditional Central Plains civilization and its prominent Bashu culture, as well as being influenced by the other ancient civilizations that surrounded it.

CNN reports that several of the artifacts unearthed at Sanxingdui are now on display at an on-site museum, while excavations continue at two of the pits. Although Sanxingdui has yet to be recognized as a UNESCO World Heritage Site, it is on the organization’s “ tentative list ” for future consideration.

Top image: A well preserved golden mask was the highlight of a recent unveiling of artifacts found at China’s Sanxingdui ruins. Source: Xinhua