The Norse sagas are filled with astonishing death scenes. In his book Laughing Shall I Die, Lives and Deaths of the Great Vikings , Tom Shippey explains that the defiant Viking attitude to death was largely responsible for making them such successful warriors. In their world view fate was inescapable and their goal was to die “well” in battle in order to reach Valhalla in the afterlife. Those who died off the battlefield were believed to go to Helheim (not to be confused with Hell). In fact, warriors were so motivated to reach Valhalla, that the warriors tried to trick Hel, its ruler, into believing they had died in battle by wounding themselves with blades on their deathbeds.

While many scenarios may cross your mind when imagining the death of a Viking warrior, the death of Sigurd the Mighty is definitely not one of them. As the second Earl of Orkney, Sigurd Eysteinsson ruled Orkney and the Shetland Islands off the northern coast of Scotland from about 875 until 892. His brother Rognvald Eysteinsson had been sent by King Harald Fairhair to conquer the Shetland, Orkney and Hebrides islands and put a stop to raids by Norwegian exiles. Although successful, Rognvald lost his son in the process and was compensated by being made an earl of the islands. He gifted them and the title to his younger brother, Sigurd, in 875. 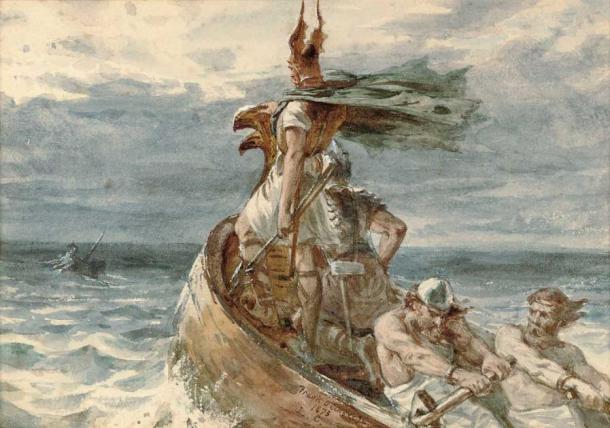 Sigurd the Mighty made his name the leader of the Viking conquest of modern-day northern Scotland. Vikings Heading for Land, by Frank Bernard Dicksee. ( Public domain )

Sigurd soon made a name for himself as the leader of the Viking conquest of modern-day northern Scotland, earning him the nickname Sigurd the Mighty. Keeping control of mainland Scotland was no easy feat, and he was soon challenged by a Pictish chieftain known as Máel Brigte the Bucktoothed, believed to have been based near modern-day Inverness. Tired of Sigurd’s raids, he proposed an honorable 40-man-per-side battle.

According to the Orkneyinga Saga , a collection of oral histories put on paper circa 1200, the treacherous Sigurd the Mighty showed up with 80 men. The obvious advantage meant that he easily defeated Máel Brigte, massacred his opposition and beheaded their leader. Having tied the severed head to his saddle as a trophy, the buckteeth of his victim rubbed against his leg. In an act of poetic justice, the wound became infected and Sigurd the Mighty died from the affliction. In this way Sigurd got his comeuppance and probably spent his afterlife in Helheim.

Top image: Sigurd the Mighty is said to have been killed by a severed head. Source: Nomad_Soul / Adobe Stock