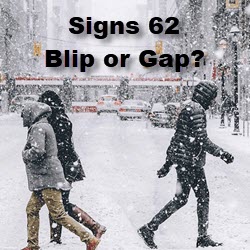 When J.P. Jones sent me the final numbers for February 2022, I was surprised by the huge event data subset results.

It left me wondering, are we seeing the beginning of a new gap in the Nemesis Cloud or is this a passing blip?

What can we make of this data and is there a real difference for us between a blip or a gap?  Let’s get into the numbers and see what we see.

Fireballs are reported worldwide, and the American Meteor Society which is the primary source for North America, for this dataset. 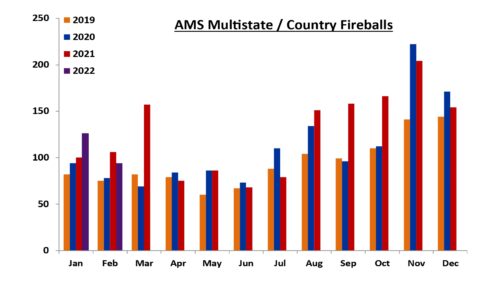 February 2022 is close behind 2021 but far ahead of 2019 and 2020.  January remains the highest for that month in recorded history.  Given the small difference for this month between this year and last, this data subset remains pretty much the same.

It is a commonplace occurrence for Multistate / Country Fireballs to be reported as huge events because a huge event occurs when 100 or more eyewitness observers report a huge fireball event. 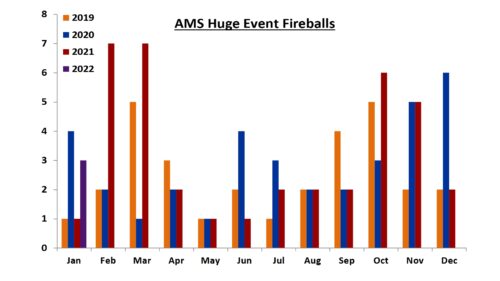 This is the data subset that surprised us.  In February 2022, there we no reported huge events.   If this indicates a broader trend, it could signal the possibility that we’re seeing a new gap between the bands of the Nemesis Cloud.  Or, it’s a one-trick pony blip on the radar.   Time will tell.

As reported in Signs 60, we use the huge event data subset for testing J.P. Jone’s Nemesis Ring Theory.   Specially, we’re looking for the gaps between the rings as illustrated below. 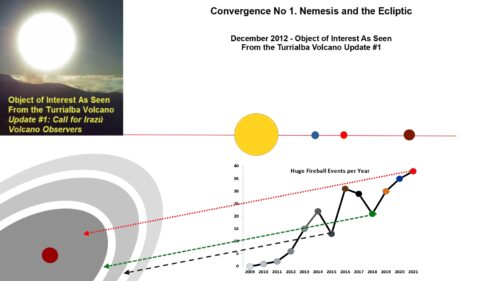 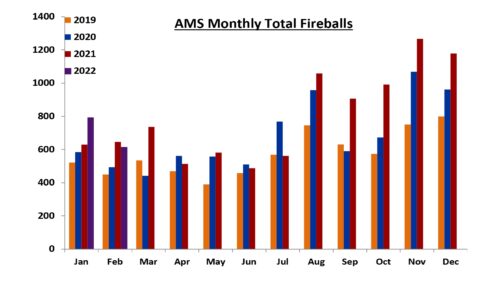 This tells us is that we continue to be in an area of space that is unusually dense with Earth-crossing objects.

The inner ring of the Nemesis Cloud is bolting upward through the ecliptic into the Northern skies as Nemesis begins accelerating toward aphelion, its closest point to Sol.   This brings us to the annual totals. 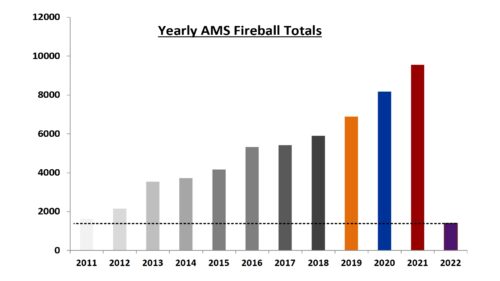 On one hand, some may want to celebrate the drop last month in key categories.  However, the overall number of fireballs on a multi-basis is still way too high.  In March, we will likely see 2022 top 2011 and 2012.

At the outset of our Signs series, J. P. Jones created a dataset spreadsheet that tracks the total number of earthquakes each month beginning with 1997.  The updated table below now includes February 2022 with the data reported by the USGS for the month. 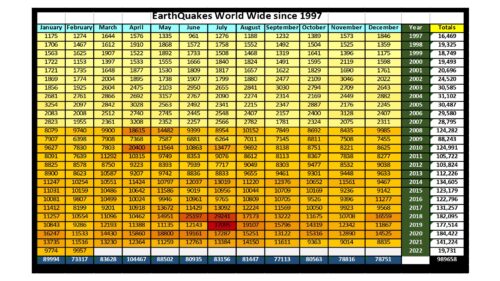 At 9,957 earthquakes of all magnitudes, February 2022 is now the second consecutive 5-digit month for 2022 as reported by the USGS.

When we look at annual global earthquakes for February, we see the same overall trend since January 2021.  The numbers track previous years but with a flatter range. 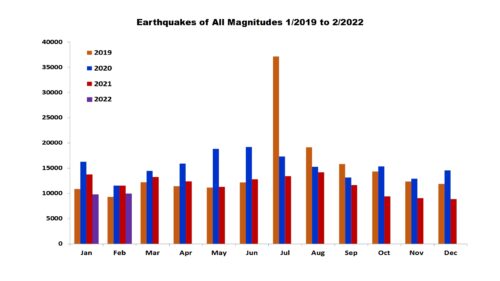 For those with an untrained eye, it would be simple to assume that shows a broad lowering trend.  For example, the USGS did not report earthquakes during the La Palma eruption. 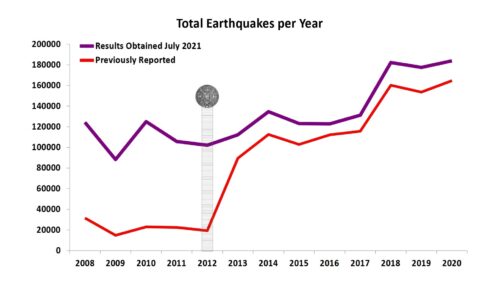 The sad truth is that thanks to anomalous earthquake reporting, we have to consider the reality that we’re flying blind with the USGS now.  We will continue reporting the data though it is now highly suspect.

The absence of AMS huge event report for February 2022 is curious.  If this is a blip on the radar so to speak, that brings us back to what J. P. Jones said it could be.  An Alberta Clipper (quicker hitter) sometimes it is a passing flurry or it could be a full-fledged blizzard storm.

Either way, it is way too early to say for certain what this means as it could also be a reporting fluke.  We could have been so busy watching the news, folks forgot to look up.  So let’s call this the Alberta Clipper option.

What about the full-fledged blizzard storm?  If this is not a blip, but the lull before a full-fledged blizzard storm, what could we see in the coming months?   We could be entering a gap between the gap we’ve been in and another deeper inside the Nemesis Cloud, which no doubt be the highest density region band of the Nemesis Cloud yet encountered.   In that event, we’re could find ourselves inching closer to a catastrophic impact event.

This is why I wrote the Win-Win Survival Handbook.  It shows you how to locate a community and to build it deep and safe.