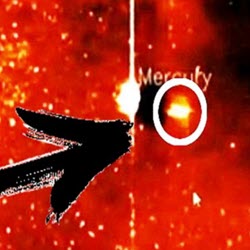 The news story we’d all like to see is: WW III Put on Hold for a Moment of Sanity.   As we hold our collective breath on that one, what else is happening in the world of interest to us “conspiracy theorists.”

For those following our Signs series, fireballs are our thing and spaceweather.com tossed us an interesting one this Saturday.   It was about the size of a 29′ RV.

For those of us who are still capable of critical thinking on the fringe, we wonder, are we alone in the cosmos?  No, as we say here in America or Nyet as they say in Russian.  Yes bunky, the lunatic fringe is clearly global and growing. OMG!

The video is in Russian, but thanks to Dina R. we have a translation with time stamps.  It poses a question. Have the Russians discovered a Death Star lurking in the outer boundaries of our solar system?

Heads up Yowusa.com readers, remember Winston Churchill’s pithy observation.  “Russia is a riddle wrapped in a mystery,” so, BYOB (bring your own borscht).

With that, let’s get into it.

This report from the Spaceweather.com home page is only up for a day so we’ve reposted it here.  Note the key points highlighted in red.

The asteroid destroyed itself at ~21:22 UT when it hit Earth’s atmosphere off the coast of Iceland, disintegrating harmlessly as a bright fireball. The entire sequence of events took less than 2 hours.

The explosion was detected by Comprehensive Nuclear Test Ban Treaty Organization infrasound stations in Greenland and Norway. Combining data from the two locations, University of Western Ontario astronomer Peter Brown estimates that “the asteroid exploded with an energy close to 2 kilotons of TNT. Assuming a speed of 15 km/s, it must have been about 3 m in diameter,” he says.

This is only the 5th time an asteroid was discovered just before it hit Earth. The others were 2008 TC3 (Sudan), 2014 AA (Atlantic Ocean), 2018 LA (Botswana), and 2019 MO (Puerto Rico). All were small space rocks that did no damage when they broke up in our planet’s atmosphere. 2022 EB5 appears to be the smallest yet, and demonstrates that humans are getting better at finding potentially dangerous asteroids before they strike.

Hats off to J.P. Jones for sending me this today.  He follows the topic of fireballs like a hawk and this goes straight to his Nemesis Clouth theory as discussed in our Signs series.

Is This a Russian Death Star?

Here is an interesting report from a Russian “conspiracy theorist” about a possible death star lurking in the outer regions of our solar system.  The post is from last summer but given all the chatter we’re now seeing about extraterrestrial fleets assembling in our solar system, this is worth a look.

Thanks to Dina R., we have a reliable English language translation of the report, as shown below.

1.31 – the video was made with NASA’s “Stereo” satellite that is observing our solar system. not long ago there was a very curious video made by it, it got on the internet. an object of a size of a planet, almost the size of Mars, is flying around in our solar system at an incredible speed.

1.51 In this video made in a special diapason we see the movement of solar system planets and the movement of this mysterious sphere-like object. Please look closely, I have zoomed in on the record and the decryption. Decryption looks even more interesting because we clearly see a sphere (2.25) – a ball or a planet, I don´t know, but it surely isn´t an object of the solar system. It´s moving nearby Sun, nearby Earth, it entered the Solar system pretty quickly and exited it as quickly.

2.40 Pay attention to the speed of this object, it´s just colossal. I don´t know if any astronomers have noticed this, but in any case the MSM hasn´t reported on this widely, as well as NASA that made this record prefers not to notice a huge object of a size of a planet that is freely flying around in our solar system.

3.09 Perhaps this has sth to do with a recent record that we looked at, a so called fleet of a 1000 UFO´s,  that was recorded by the International Space Station camera. Someone in their comments suggested it wasn´t a 1000 UFO fleet but rather one huge object that was camouflaging itself.

3.50 Perhaps the record of this sphere has to do with this supposed space war for Earth that was taking place the whole spring of this year, if we would choose to imagine it that way. Perhaps it is connected with the evacuation of et´s from Earth. we have covered that in May of this year. 4.22 perhaps this video has to do with a UFO crash in Brazil.

[….] 4.42 This video made me worry because no official sources of information publish anything about this sphere. this video was leaked and no one comments on it, nor do they analyze it. Why am I worried? Imagine, a huge object is flying around in our solar system and no one tells us anything about it. […]

5.35 Actually this video brings me to associations with a Hollywood movie Independence day 2. We see that some huge sphere comes to people and warns about an upcoming invasion. So, it’s some advanced civilization’s messenger. I also see that some bloggers mentioned huge spheres that visited our solar system and served as advanced civilization’s spies. the investigators of anomalies have a theory that it is not a mother ship, as we would think of it as depicted in Hollywood movies.

6.45 This sphere must serve as a space teleport. It comes to our solar system and out of that the aircrafts that are spying come out and go to certain planets. There is an opinion that one or more spheres have already been to the Solar system, the forces that guard Earth sent those spheres away because they (those who guarded Earth) discovered evil intentions of the spheres, and yet the spheres returned. […]

7.40 perhaps it yet again has to do with strange things that happened in the skies this spring, especially with a strange star in the skies. We have suggested that perhaps that star wasn’t Venus as we were told by the astronomers, there weren’t many astronomers talking about that star, which meanwhile has disappeared from the skies. Back then many amateurs recorded that object with powerful cameras with zoom equipment, and found that it had a circle-like shape. We concluded that if it wasn’t Venus, perhaps it was a mothership of some sort or a toll vehicle or a circle like vehicle. 8.40 we then compared it to ancient revelations. we have also carefully concluded that a mass closure of observatories could have sth to do with the events we spoke of. […]

9.10 the appearance of this object worries me because no one talks of it and yet it flies around at a huge speed. perhaps it’s a fake video, although they mention that it was NASA leaked video. Some say this record isn’t fake. If there are some forces that guard Earth what are those forces and how were such forces able to send such teleports away? has there been anyone that was able to negotiate with them and send them away? maybe it’s a part of space wars that took place this spring and the sphere was on the evil side?

Before you go woke on this, keep in mind, it was posted last year and what does it show?  That their fringe thinks about the same things we do.

With all the Brandon bashing, there is a lot of misinformation out there about Russia and everyone else for that matter.   But the key point is that propaganda starts wars and right now the MSM is beating the drums for it.

For example, in a recent MSM interview, a Ukrainian source stated that Russia has lost more tanks in this invasion than in all of WW II.

At the Battle of Kursk in July and August 1943, the Russian losses were 254,470 killed, missing, or captured 608,833 wounded and they also lost 7,000 tanks.  How many operational tanks are presently in service in the Red Army?  Nowhere near 7,000 and Kursk was just one battle.

However, it is important to remember that the Battle of Kursk was the largest tank battle in the history of humankind and while the Nazi losses were roughly half that of the Russians, Hitler left so much blood and treasure on that battlefield that the Wehrmacht ceased to be a war-winning army.

I share the opinion of many historians that had it not been for Kursk, the Allies might not have been able to get off the beaches in Normandy.

The point is, how can there be world peace without world truth?