The United Kingdom is gearing up for four days of jubilee celebrations, from the 2nd to the 5th June 2022, filled with concerts, street parties and parades. These events will celebrate seventy years since Queen Elizabeth II came to the throne. While she already took the title of longest-reigning monarch in the United Kingdom back in 2015, overtaking the staunch Queen Victoria , outside her realm there are still a couple of monarchs who have outlasted her reign. 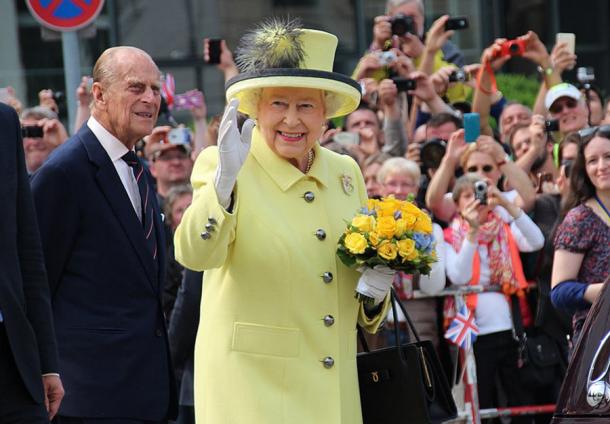 Queen Elizabeth II in 2015, is one of the top three longest-reigning monarchs in history. (PolizeiBerlin / CC BY-SA 4.0 )

At just 25 years of age, Elizabeth came to the throne on the 6th February 1952 when her father, George VI died unexpectedly. The official coronation of Elizabeth II, on the 2nd June 1953 in Westminster Abbey , was the first in history to be broadcast live on television to an estimated audience of 27 million. While the monarchy can seem outdated to the uninitiated, Queen Elizabeth II has overseen an era of extreme social change. She came to the throne during the aftermath of World War II , saw the end of the British Empire and has been served by 14 prime ministers, including Winston Churchill and Margaret Thatcher.

Under her watch there were also many firsts. On a personal level there were several royal divorces, the most famous being that of Charles and Diana  which stood out for the inordinate amount of attention it achieved from the press.

More recently, in 2018 Meghan Markle went down in history as the first publicly biracial person to marry into the family, seen by many as an opportunity to break with the history of racism in Great Britain. History explained that historically “mixed-race marriages among European royalty often went unacknowledged due to racism within both the royal family and European society at large.” 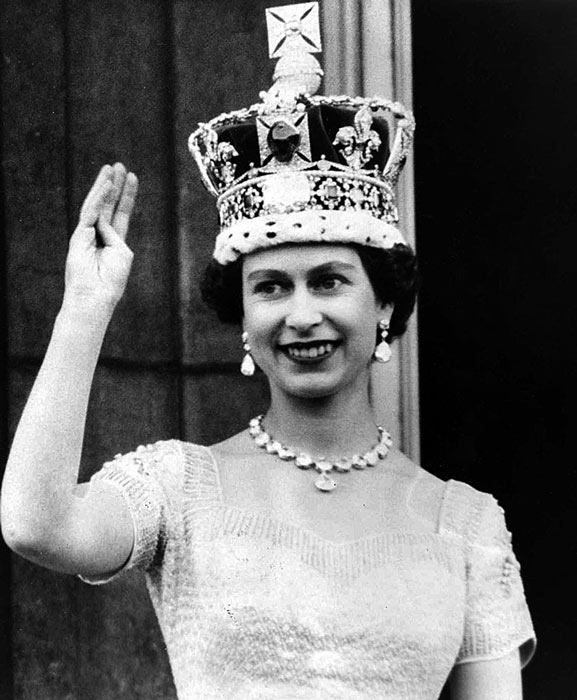 Queen Elizabeth II waves from the palace balcony after her official Coronation in 1953. ( National Media Museum )

Elizabeth II, and her husband Philip, the late Duke of Edinburgh, came into the throne during a time of monarchical crisis. This prompted action hoping to modernize the royal institution, such as the broadcast in 1969 of a 105-minute BBC documentary aiming to humanize and strengthen the monarchy. The aptly titled “Royal Family” attracted 30 million viewers in Britain alone. Elizabeth also famously went against tradition when she began the “walkabout,” a term to describe greeting crowds on the street in person, during a royal tour in 1970.

Now 96, the Queen celebrates the anniversary of her ascension in June rather than February, since her true ascension coincides with her father’s death. The longest-reigning female monarch in recorded history, 2022 marks her Platinum Jubilee. Despite a series of familial scandals and dropping popularity, post-pandemic Britain has been preparing for the special weekend for months. There’s even a selection of merchandise for fans, ranging from a Queen Elizabeth Barbie tribute doll to a special edition single malt whiskey. 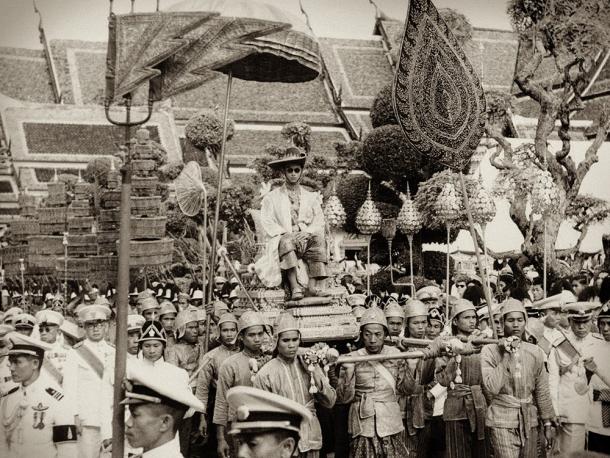 Bhumibol Adulyadej of Thailand at his official coronation in May 1950. ( Public domain )

At just 18 years of age, Bhumibol Adulyadej unexpectedly became King of Thailand, following the sudden and mysterious death of his older brother who was found with a gunshot wound to the head. Although he was actually born in Cambridge, Massachusetts in the United States, while his father was studying at Harvard, Bhumibol was the ninth Thai monarch from the Chakri dynasty, hence the title Rama IX.

In fact, this was the dynasty of Siam’s King Mongkut and Chulalongkorn (the great-grandfather and grandfather of Bhumibol respectively), who featured in the 1870 memoirs of Anna Leonowens, The English Governess at the Siamese Court , which was turned into a 1946 film Anna and the King of Siam and a later Rodgers and Hammerstein 1951 stage musical, The King and I . The latter two were banned in Thailand due to censorship laws against any disrespectful portrayal of the Thai monarchy.

While Bhumibol was educated abroad, had an incredible fortune and famously was passionate about jazz, he has been remembered as “the people’s king” having devoted his reign to his over 1,200 development projects. The absolute rule of the Chakri dynasty came to an end after the 1932 Siamese Revolution with a coup against King Rama VII, which in turn put in place a constitutional monarchy. In 1939, the country’s name was officially changed from Siam to Thailand which means “Land of the Free.” 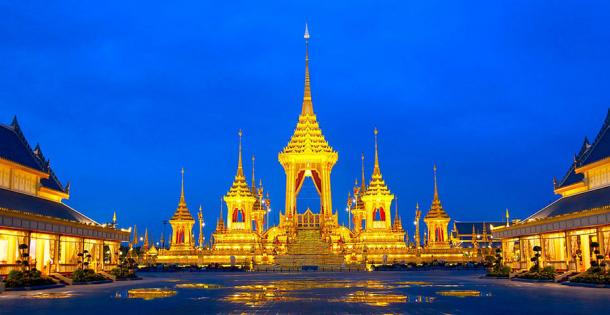 The royal crematorium built for the cremation of Rama IX of Thailand. (Tris_T7 / CC BY-SA 4.0 )

This meant that Bhumibol exercised relatively little power, but the backdrop of a series of military coups meant that he came to be seen as a calm and unifying entity throughout his 70-year-rule. “Thais came to see this Buddhist king as a father figure wholly dedicated to their welfare, and as the embodiment of stability in a country where political leadership rose and fell through decades of military coups,” explained The New York Times .

After the country endured a year of mourning, during which Rama IX was laid in state at the Grande Palace and visited by over 12 million people, there was a stunning funeral cremation ceremony in Bangkok. A 50-meter (164 ft) temporary golden crematorium was constructed to represent Mount Meru , where Thais believe their royalty go after their death, and his son lit the funeral pyre on the 26th October 2017.

His death brought up questions about the future of the Thai monarchy, especially since his son and successor Vajiralongkorn, a.k.a. King Rama X, cuts a strikingly controversial figure. The monarchy in Thailand has been protected by strict lèse-majesté laws which prohibit any insult to the royal family, due to the fact that traditionalists view the monarchy as a sacred institution.

According to The New York Times , under King Bhumibol Thais were prosecuted with jail time (up to 15 years) for anything from critical graffiti, theater, or even personal conversations. In 2021, under Rama X, a Thai civil servant was sentenced to 43 years and six months in prison for sharing audio clips on YouTube and Facebook which were deemed critical of the monarchy. 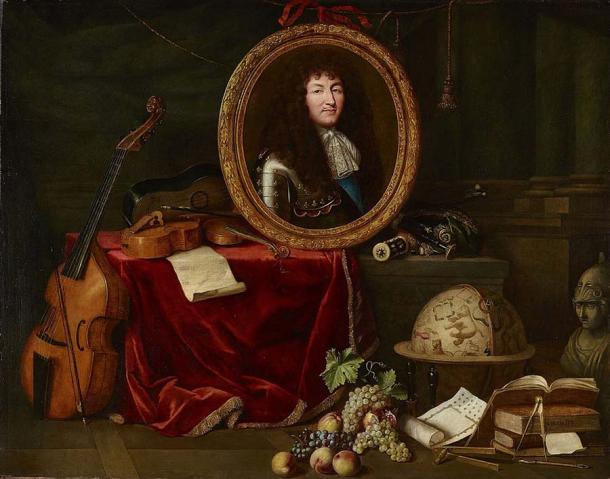 Allegorical painting from 1672 of Louis XIV, as the protector of Arts and Sciences, by Jean Garnier. ( Public domain )

Louis XIV was just four years old when he came to the throne, with his mother, Queen Anne, as his sole regent. Also known as Louis the Great, he saw himself as the Sun King, and used the sun and symbol of Apollo, the god of peace and the arts, as his emblem. Famously stating “I am the State,” he believed himself to be a direct representative of God on Earth. This belief led him to centralize power over France and its colonies, tighten control, and disempower problematic nobles. In keeping with his world view, he even hosted public getting-up and going-to-bed ceremonies, where his most favored courtiers could watch the Sun King preparing for the day and getting ready for bed.

His 72-year-rule made him the longest-reigning monarch in history, but was nevertheless riddled with war. Born into the Thirty Years War , from 1648 he also faced a series of civil disturbances known as the Fronde (1648 to 1653). Though unsuccessful, they aimed to limit the power of the King. Marriage to Maria Theresa of Spain in June 1660, was arranged for political reasons, in the hope of forging a lasting peace between the Habsburgs of Spain and the Bourbons of France.

Notwithstanding, his ambition to dominate Europe led him to launch various other expansionist campaigns causing friction with his neighbors. In an attempt to defend this grandson Philip V, and his right to Spain and its empire, he also entered the War of Spanish Succession which plunged France into crippling debt. “I have often undertaken war too lightly and have sustained it for vanity,” said Louis XIV on his deathbed. “Do not imitate me, but be a peaceful prince.” 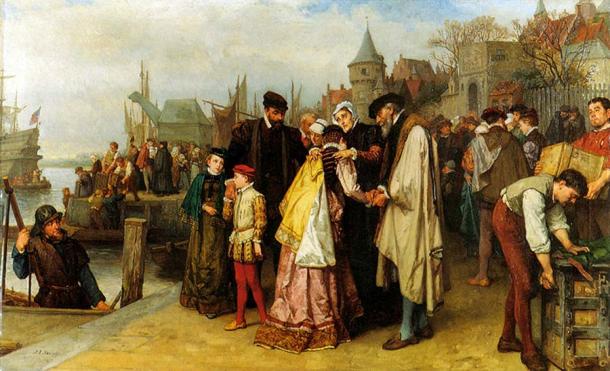 Emigration of the Huguenots by Jan Antoon Neuhuys. ( Public domain )

War during the reign of the Sun King, wasn’t only fought outside the borders of France. Having vowed to defend the Catholic faith during his official coronation on the 7th June 1654, Louis XIV persecuted the Protestant Huguenots during his reign. He revoked the 1598 Edict of Nantes , which had granted tolerance to Protestants, and replaced it with the Edict of Fontainebleau which ordered the expulsion from France of Protestant clergy, the ban on Protestant teaching and the destruction of Protestant churches. This caused a mass exodus of French Protestants, with estimates of over 200,000 leaving France. 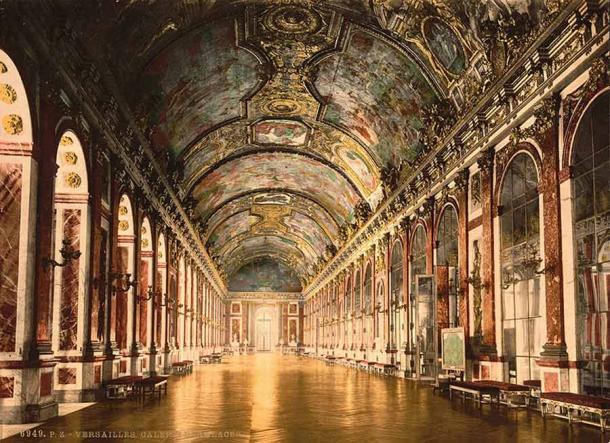 The Hall of Mirrors at Versailles. ( Public domain )

In 1682, Louis moved his court to the Palace of Versailles. Built to house the entire court, it meant he could keep the nobility close at hand and under his control. It’s Hall of Mirrors, used for official receptions and decorated with events and victories of his reign, was a “potent symbol of the King’s absolute power,” explains the Chateau de Versailles website. A true patron of the arts, his reign has been remembered as the Great Century, and his court as home to some of the greatest minds of the era including Molière, Lully and Racine.

Blakemore, E. 22 August 2018. “Meghan Markle Might Not Be the First Mixed-Race British Royal” in History. Available at: https://www.history.com/news/biracial-royalty-meghan-markle-queen-charlotte

Chambru, C. 16 October 2020. “What consequences did religious intolerance against the Huguenots have in France?” in LSE. Available at: https://blogs.lse.ac.uk/businessreview/2020/10/16/what-consequences-did-religious-intolerance-against-the-huguenots-have-in-france/

Gopalakrishnan, M. 9 March 2021. “Before Meghan and Harry: The British royals’ historical views on race” in DW. Available at: https://www.dw.com/en/before-meghan-and-harry-the-british-royals-historical-views-on-race/a-56818581

Hulme, K. 19 March 2018. “Land of the Free: How Thailand Got Its Name” in Culture Trip. Available at: https://theculturetrip.com/asia/thailand/articles/land-of-the-free-how-thailand-got-its-name/

Meares, H. 2 December 2020. “The 1969 Documentary That Tried to Humanize Queen Elizabeth II and the Royal Family” in History. Available at: https://www.history.com/news/queen-elizabeth-ii-1969-royal-family-documentary

No name. 20 September 2015. “Running Afoul of the Thai Monarchy” in The New York Times . Available at: https://www.nytimes.com/interactive/2015/09/18/world/asia/thailand-king-lese-majeste.html

No name. No date. “Louis XIV 1638-1715” in Chateau de Versailles . Available at: https://en.chateauversailles.fr/discover/history/great-characters/louis-xiv

Wongcha-um, P. 3 May 2019. “The real ‘King and I’ – the story of new Thai king’s famous ancestor” in Reuters. Available at: https://www.reuters.com/article/us-thailand-king-coronation-mongkut-idUSKCN1S90UR