New research just published in the journal Frontiers in Genetics reveals fascinating details about the evolution of Europeans, the humans living in Europe during the Neolithic period (10,000 BC to 4,500 BC). It seems that during this tumultuous time, when agriculture replaced hunting and gathering as the principal organizer of society and culture, ancient Europeans experienced some notable physiological changes.

In general, these ancient Europeans became taller, lighter in skin color, more prone to cardiovascular disease, and more intelligent. The researchers theorize that evolutionary pressures played a significant role in these changes, as people adapted in ways that increased their odds of survival in a world dominated by agriculture.

The results of this noteworthy study were announced by a team of genetic researchers affiliated with the Radboud University Medical Center in Nijmegen, Netherlands, and the Helmholtz Center for Infectious Disease in Hannover, Germany. These scientists studied the genetic profiles of more than 800 ancient Europeans, which were compiled from DNA samples taken from skeletal remains recovered at various archaeological sites.

These results were then compared to the DNA samples of modern Europeans, to see what differences could be identified. The purpose of this research was to trace the evolution of humans through the last 50,000 years, to see what could be learned about how humans have changed genetically over that time.

The scientists carefully studied gene assemblages known to be associated with a wide range of characteristics, including skin pigmentation, weight or Body Mass Index, cholesterol-related metabolism, cardiovascular functioning, and activity in the brain (intelligence). As their research progressed, they ended up focusing on the evolution of Europeans during the Neolithic period. This is when the contents of these gene assemblies changed the most, giving human evolution received a measurable jumpstart.

“In general, we see a clear change of some of these traits before and after the Neolithic Revolution , as if there was an acceleration of evolutionary processes then,” Radboud Medical Center physician and study author Mihai Netea said in a Radboud press release . 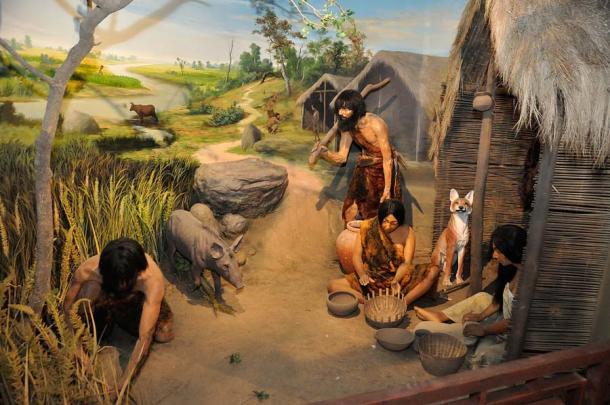 Diorama of an eary Neolithic village. (Biswarup Ganguly / CC BY 3.0)

Understanding the Evolution of Europeans

Before the Neolithic period, human populations in Europe elsewhere lived exclusively in hunter-gatherer groups. But the Neolithic Revolution overturned everything. People stopped wandering to settle in small villages or on fixed plots of land, cultivating crops, raising farm animals, and relying on inventiveness and hard work to increase food production to previously unimaginable levels.

The change was radical, and it represents perhaps the most dramatic and comprehensive cultural shift in human history. It completely altered the way humans lived and organized their societies, and it apparently affected the course of human evolution as well.

“During this transitional period, we not only found a clear change in body height, but in skin color ,” said Helmholtz Center researcher, Yang Li. “ Europeans, for example, had retained their dark skin color for a remarkably long time, and it really lightens during this period. This may be due to migration from populations in the Middle East with less pigmented skin.”

The Evolution of Cardiovascular Disease

One of the more interesting changes were those that made Neolithic Europeans more vulnerable to cardiovascular problems. This might not seem like a positive genetic alteration, but in fact it had both an upside and a downside.

“In many genes involved in metabolism and the risk of cardiovascular disease we saw little change, only with one obvious exception: HDL cholesterol — often called ‘good’ cholesterol — shows a clear decrease,” Yang Li explained. “It increases the risk of arthrosclerosis, but there’s a link with intelligence as well.”

“Perhaps it is in the development of cognitive functions, because cholesterol is fundamental to the development and functioning of the brain,” he continued. “Some minimal changes in genes in cholesterol metabolism have been linked to cognitive functions, while variations in levels of HDL and LDL have been linked to changes in intelligence, learning and memory.” So while the risk of becoming sick or dying increased by the loss of good cholesterol, everyone could have benefitted by increases in intelligence that accompanied that change.

At least some of the new traits discovered by the scientists must have survived and proliferated because they increased the odds of survival in agricultural societies. This shows how evolutionary pressures can make a measurable impact in just a few hundred or few thousand years. 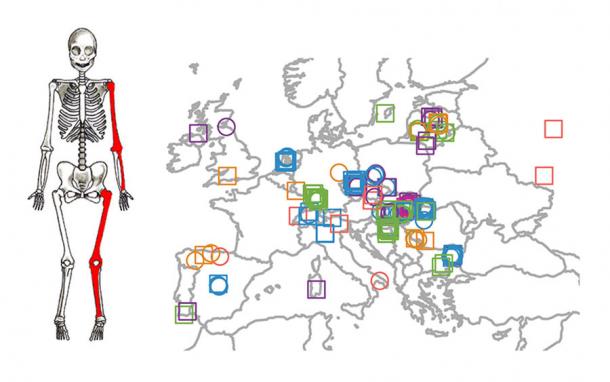 The Radboud University and Helmholtz Center findings supposedly tracked increases in height among Neolithic European populations. But a second large-scale study, which was just published in the journal PNAS, found that people who lived during the Neolithic period didn’t actually grow as much as they could have or should have.

The international team of researchers involved in this project analyzed genetic information extracted from the well-preserved skeletal remains of 167 ancient Europeans found during various archaeological excavations. They also examined data obtained from the studies of the skeletons as a whole, which identified various types of abnormalities and deformations in addition to tracking height.

Contradicting any assumptions about genetic determinism, the scientists found that Neolithic people were not reaching the heights predicted by their DNA profiles. In comparison to individuals who’d lived in earlier periods, specifically the Upper Paleolithic and Mesolithic periods (from 50,000 to 12,000 years ago), Neolithic Europeans were on average 3.82 centimeters (1.5 in) shorter. In comparison to those who’d lived later, in the Iron Age, Neolithic Europeans were 2.21 centimeters (0.87 in) shorter. These differences were not rooted in genetics, but had to have been caused by other factors.

Notably, the Neolithic skeletal remains revealed multiple examples of abnormalities that impacted bone development. These conditions were of a type that would have developed as a result of childhood stress or distress caused by poor diet and nutrition or infectious disease.

It is known that the agricultural revolution led to increased population density. But greater population densities meant greater vulnerability to infectious diseases, some of which if contracted in childhood could stunt growth. The agricultural lifestyle also created disparities in wealth that may have left poorer farmers struggling to provide their children with adequate nutrition. The long hours that many children were undoubtedly working may have also contributed to their malnutrition, since their caloric needs would have been higher and therefore more difficult for struggling parents to meet.

Whatever the source of the problem, it seems the Neolithic lifestyle caused unique levels of childhood stress that impacted height. The Radboud/Helmholtz study assumed greater height for Neolithic Europeans based on genetic potential, but apparently the living conditions of the Neolithic period prevented most from reaching their potential. Cultural, economic, and environmental factors interfered with normal development, dealing a blow to the idea that the expression of physical characteristics is controlled exclusively by the genes.

As these new discoveries about the evolution of Neolithic Europeans demonstrate, the relationship between society, culture, environment, and genetics is dynamic and complex. However, the picture is interpreted or untangled, understanding how human evolution progresses undoubtedly has relevance in the modern age, as Milhai Netea points out by mentioning a modern demographic trend.

“Look at the mass rural-urban migration, which is accompanied by major changes in social and cultural habits, eating behavior and environmental factors,” he said. “What will it mean for important human physiological traits, for evolutionary pressures on human traits and genes, and human diseases in modern societies?”

Questions such as these may become more relevant than ever in the coming decades, as climate change and the societal disruptions it causes may lead to mass migrations on a scale not experienced at any previous time in history. A new day may be on the verge of dawning, and the changes it brings, culturally and genetically, may prove to be every bit as radical and transformative as those experienced during the Neolithic period .