It is well-known that modern humans interbred with Neanderthals during the time they co-existed in Europe and Asia. A 2018 study revealed an interesting and intriguing detail about that interbreeding, which occurred between 80,000 and 40,000 years ago. Researchers tracing the development of the cervical cancer-causing human papillomavirus (HPV) in ancient populations concluded that Neanderthals likely passed a specific strain of HPV to modern humans at that time. This deadly strain became a dominant form of HPV in Eurasia and is different to the rarer strain found in modern African populations.

For this groundbreaking study , which was published in the journal PLOS Pathogens , an international team of genetic scientists, led by Zigui Chen of the Chinese University of Hong Kong and Robert Burk of the Albert Einstein College of Medicine, obtained HPV viral samples from several species of non-human primates. They also collected thousands of complete and partial genomes from human papillomavirus variants that are found in humans in various locations around the world. 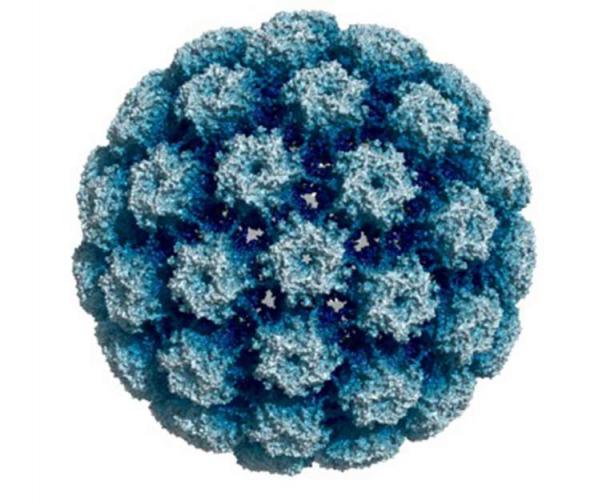 Tracing the Evolution of the Human Papillomavirus

Using a technique known as molecular clock modeling, the researchers were able to trace the evolution of HPV varieties back to common sources. They were particularly interested in charting the evolutionary development of the strain known as human papillomavirus type 16 (HPV 16), which is sexually transmitted and causes cancer in humans .

Ancient viral samples from extinct species like Neanderthals could not be obtained for this study. But the scientists drew conclusions about Neanderthal versions of human papillomavirus type 16 based on the differences in human HPV 16 samples taken from around the world. HPV strains found in Eurasia were different than strains found in Africa, and the scientists concluded that this was because modern humans interbred with Neanderthals in Eurasia but not in Africa.

After looking carefully at the genetic data, the scientists found that human papillomavirus evolved separately in each species it infected. They referred to this as “niche adaptation of viruses to host ecosystems as the first stage of the evolution of oncogenic HPVs.” Diversity in human and non-human papillomaviruses, they wrote, was caused by “viral-host coevolution.”

In other words, the virus evolved in lockstep with the evolution of the species it was infecting. As the differences in the HPVs found in Africans and non-Africans showed, the virus could also develop differently in different populations within the same species.

“The current data provides a framework to unravel the mysteries of oncogenic HPV genomes as we expand our understanding of viral-host evolution,” the scientists concluded. 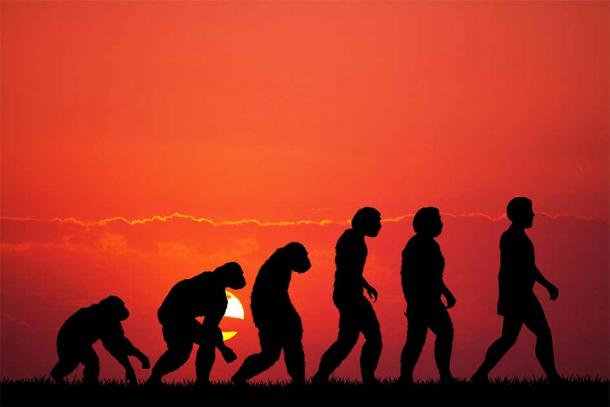 Non-human primates can carry the same viruses, and that is how it is with the human papillomavirus, which has existed in primates and hominins for an astounding 40 million years. ( adrenalinapura / Adobe Stock)

Tracking the Viral Co-Evolution of Neanderthals and Humans

Humans and humanlike species (hominins) have been carrying viruses with them for as long as they’ve existed. In some cases non-human primates can carry the same viruses, and that is how it is with the human papillomavirus, which has existed in primates and hominins for an astounding 40 million years.

As each ancient ancestor or cousin of modern humans evolved, both human and non-human, the viruses that infected them changed along with them, producing greater viral diversity. When Neanderthals and Homo sapiens split onto separate evolutionary pathways approximately 500,000 years ago, the variant of the human papillomavirus type 16 (the cancer-causing version) that each carried diverged simultaneously.

In Africa, where Homo sapiens lived almost exclusively for most of their existence, HPV 16 produced strains B, C, and D. Meanwhile, the A strain was confined to the wandering Neanderthals , who carried it with them as they spread out across the Near East, Europe, and Central Asia hundreds of thousands of years ago.

When Homo sapiens finally began migrating out of Africa in large numbers starting approximately 80,000 years ago, they moved in alongside Neanderthals in many locations. Initial interbreeding occurred at that time, marking the first introduction of the A strain of HPV into Near Eastern, European, and Asian human populations. 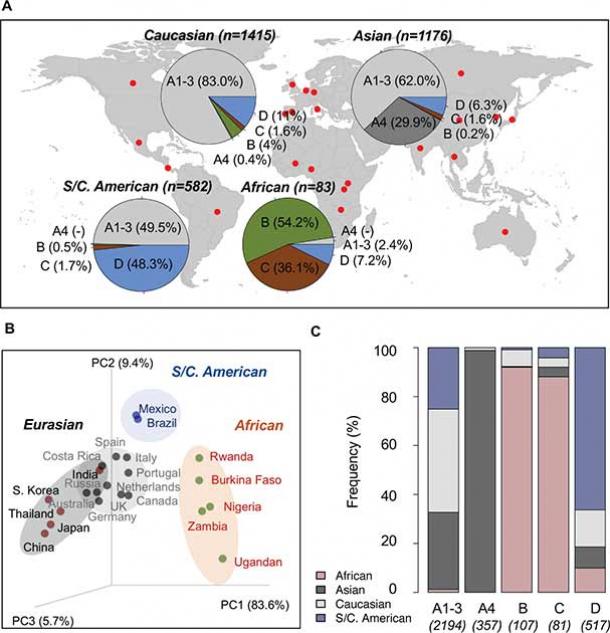 Neanderthals introduced three sub-versions of the A strain, dubbed A1, A2, and A3 by scientists, to their newly arrived cousins from Africa. But that wasn’t the end of the story.

After modern humans arrived in their territory, Neanderthals started migrating farther eastward, into East Asia. This movement was accompanied by a mutation in the HPV 16 virus, and when Neanderthal groups arrived in East Asia and began interbreeding with the locals they passed on a freshly-developed version of HPV 16 known as A4.

Today, the A4 human papillomavirus sub-strain is found almost exclusively in East Asian countries, and this version is responsible for about 40 percent of all HPV infections in the region. In contrast, the B, C, and D versions still predominate in Africa, where sexual contact with Neanderthals in the distant past was infrequent or non-existent.

It should be emphasized again that the scientists involved in this intricate genetic study did not have samples of the Neanderthal version of the human papillomavirus type 16 to examine. They only deduced this version’s characteristics indirectly, by looking at the diversity of HPV 16 strains currently found in humans and linking them to their most likely point of origin. 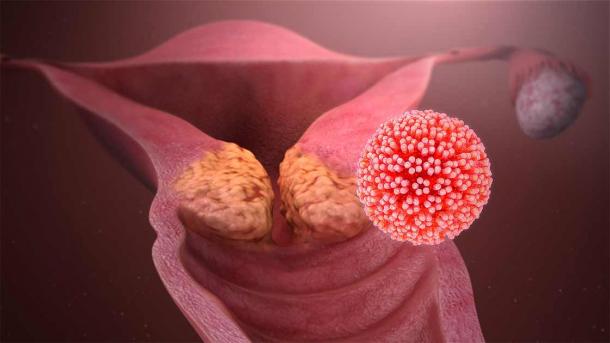 HPV is the most common virus that infects the reproductive tract and cervical cancer is by far the most common disease caused by it. ( www.scientificanimations.com / CC BY-SA 4.0 )

Viral History and the Advance of Medical Knowledge

DNA inherited from Neanderthal ancestors makes up approximately 2-4 percent of the genetic code of modern humans. This is consistent with the theory that humans interbred with Neanderthals quite frequently in the tens of thousands of years between the first inter-species contact and the Neanderthals’ eventual extinction in 40,000 BC. When this happened sexually transmitted diseases were undoubtedly passed back and forth, which explains the current distribution of HPV strains found in humans across the globe.

The scientists involved in this research are hopeful that their findings will prove useful to medical science.

When Neanderthals and modern humans encountered the human papillomavirus tens of thousands of years ago, they couldn’t have known about its presence or about its effects. Modern medical science is better informed, and therefore better prepared to study this viral enemy and develop solutions that could lighten its impact.

This is an important consideration. Cervical cancer is the fourth most common cancer in women, and is responsible for the deaths of more than 250,000 women around the world every year. If this research does help scientists learn more about how the human papillomavirus functions, perhaps that number could someday be reduced.

Top image: This is what the human papillomavirus looks like in the body. The latest research has indicated that modern humans got HPV from interbreeding with Neanderthals in Eurasia. HPV is the most common sexually transmitted infection globally.                Source: Naeblys / Adobe Stock