Can you imaging sitting down with the family to watch a group of naked men, with their olive oil-soaked bodies glistening in the sunshine, running around and flexing their muscles? A great deal has changed since the Olympic Games were celebrated in ancient Greece , but one aspect that may surprise sporting fans out there is that the Olympic Games used to be played in the nude.

The naked male body was an important symbol for the ancient Greeks, and the arena of the Olympics, an event only open to male citizens, was no exception. The athletic body was the ultimate symbol of civilization and of Greek domination. “In Archaic Greece, disrobing fully to become naked for sport became an assertive communication of maleness, ethnicity, status, freedom, privilege, and physical virtue,” explained the historian Donald Kyle in Sport and Spectacle in the Ancient World . 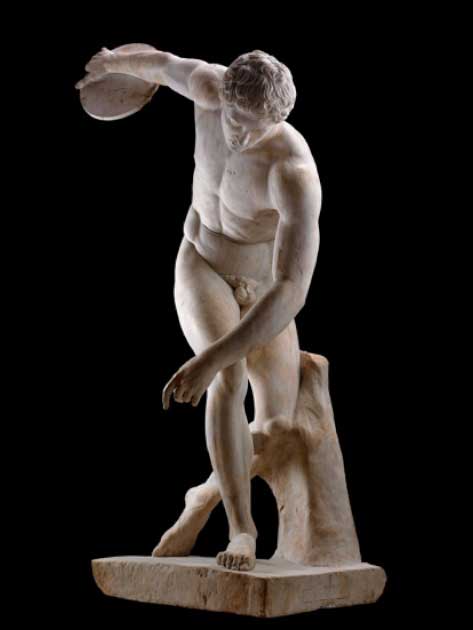 The Discobolus, or discus thrower, of Myron, is an ancient Greek sculpture of a nude male athlete throwing a discus. While the original, made in bronze, is lost, there are numerous Roman copies in existence. The Townley Discobolus is housed at the British Museum. (British Museum / CC BY-NC-SA 4.0 )

In fact, it was only “ barbarians” (such as the Persians and Egyptians) who found the sight of men slathering oil on each other and competing in the nude a little odd. For the ancient Greeks, being a victorious Olympic athlete was tantamount to being a demigod, and exhibiting their perfect bodies in public was seen as a way to honor the gods. The word gymnasium or gymnastics actually comes from the Greek γυμνός (‘gymnos’) ,  which translates as “naked” or “lightly clad.” The gymnasium was an important institution for the ancient Greeks, a place in which men were able to train, socialize and be educated, in the nude.

Although the Olympic Games were first celebrated in 776 BC, it wasn’t until 720 BC that athletes began to compete butt-naked, although historians are not entirely sure why. According to some accounts, the first athlete to compete naked was Orsippus. A runner from Megara, it is believed that his loin cloth fell accidentally during a footrace. Some versions claim he had discovered he could run faster naked. Other accounts claim that it was Acanthus of Sparta who appeared first in the nude, as it is believed that this was a Spartan tradition. 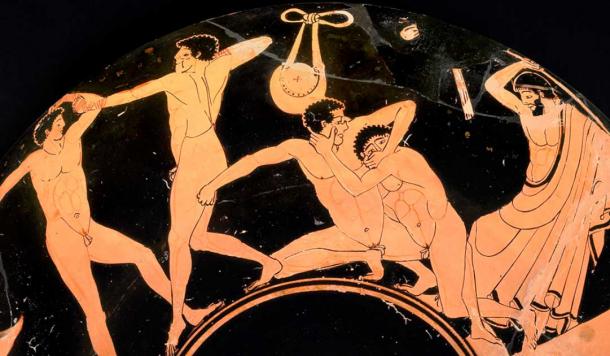 Whoever was the first to compete naked at the Olympics, by the late 8th century BC it was the norm. Keeping in mind that the rural sanctuary of Olympia on the Peloponnese peninsula of western Greece was dedicated to Zeus, this custom was in line with the Greek tradition of paying tribute to the Greek god through displays of physical prowess. While you may cringe imagining the kinds of injuries that could be incurred by horse racing or competing at pankration (an Olympic sport in which the only prohibitions were biting and eye gouging) au naturel , these were different times and prudish Christian dogmas in relation to nudity and sexuality had not yet taken hold.