The next time you’re looking through an illuminated manuscript, keep an eye out for images of medieval knights fighting off snails. Of all the villains in the world, these may not have been the first to come to mind. Nevertheless, as someone with a bizarre phobia of the slimy creatures, it makes perfect sense to me.

Illuminated manuscripts are handwritten books, decorated with stunning painted illustrations and often embellished with gold and silver. While the text is emblazoned with ornate painted initials, the borders are regularly festooned with marginalia, be it scribbles, doodles or decorative drolleries, images which became popular additions to illuminated manuscripts between the 13th and 15th century. 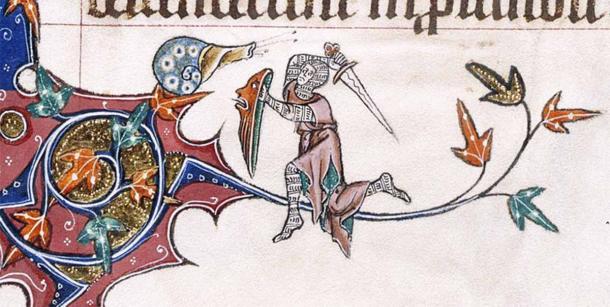 Battle between a knight and a snail as depicted in the margins of Gorleston Psalter . ( British Library )

The margins were the spaces where artists could have a little fun, providing comic relief and artistic critique of everyday life. Like a modern-day meme however, the artists didn’t leave behind any kind of explanation for their doodles and so historians are unsure as to what exactly these farcical illustrations actually mean. While animals in general were often seen as synonymous for certain morals or characteristics, the scene of a diminutive snail battling it out with a medieval knight, and often having the upper hand to boot, remains a mystery.

This hasn’t stopped people from trying to unravel the snail vs knight enigma, and there have been a few hypotheses thrown out by academia past and present. So enticed by the luscious images on the margins of medieval manuscripts, Michael Camille even wrote a book about them. In Image on the Edge: The Margins of Medieval Art , Camille discusses the outlandish creatures that populate the pages of medieval illuminated manuscripts to try to grasp this particularly subversive art form and even took a stab at summarizing some of the explanations proposed for why they depicted embattled snails.

Detail from from MS. Royal 10 IV E (aka the Smithfield Decretals) depicting the revenge of a snail against a medieval knight. ( British Library )

It appears that Comte de Bastard was the first to try to decipher the riddle back in 1850, when he linked depictions of the snail with the Biblical story of the Resurrection. Medievalist Lisa Spangenberg has theorized that the answer could lie in Psalm 58 which states: “let them be like a snail which melts away as it goes, Like a stillborn child of a woman, that they may not see the sun.”

Meanwhile, historian Lilian Randall published an article in the quarterly Speculum which posited that the repetitive use of snails fighting knights was actually a bigoted reference to the Lombards, an unpopular Germanic people widely known as smarmy money lenders and pawnbrokers. Their connection with snails was an insult, and a racist one at that.

A snail battling it out with a knight in an obvious form of satire, believed by some to be taking a dig at the entire knightly class or even the aristocracy. The most likely explanation is that the customary use of snails fighting knights , used in manuscripts from many countries and over many decades, metamorphosed over time and meant different things to different artists. On the other hand, maybe it was just a bit fun.

Top image: Depiction of a knight vs snail battle from Brunetto Latini’s Li Livres dou Tresor from circa 1315 to 1325. Source: British Library