Religious visions have frequently taken place in the dark damp setting of caves and subterranean chambers making them attractive locations for shrines, chapels, pilgrimages and healing. One of the most famous of these sites is Lourdes in France, now a major Catholic shrine to the Virgin Mary. What started as a series of visions in the Massabielle grotto by a local girl, has lead to the small Pyrenees town becoming a hugely popular pilgrimage site attracting five million visitors per year to its sanctuary and curative spring waters. Caves have also been used as hermitages by ascetics such as those in the mountains of Montserrat, Spain which were inhabited during the Middle Ages. There’s something alluring and otherworldly about these grottoes and their shrines. Perhaps it’s the darkness, the vast geological age of the rock or the difficulty in reaching some of them.

Caves also played a role in pagan mythology. The Ancient Romans and Greeks often set up sanctuaries in spring-fed caverns centered on water deities. In Ortigia, Sicily the Fountain of Arethusa is named after a water nymph who, according to Greek mythology, escaped the unwanted attentions of the river god Alpheus by travelling under the sea from Arcadia in Greece, all the way to Syracuse. A natural spring, coming up from a cave, the fountain is surrounded by papyrus plants which are extremely rare in Europe. Malta’s largely limestone geology means there are numerous natural caves amid ancient dry river valleys covering its two main islands. They have proven a draw for many different reasons over the years. Għar il-Kbir is well-known to have been a troglodyte settlement for a long time, although the ancient ‘cart ruts’ nearby get most of the attention these days. Għar Dalam has been a wonderful resource for palaeontologists and archaeologists due to its Ice Age fossil record and signs of Early Neolithic human habitation. But, there are also caves with stories of religious visions, demonic infestation and apostolic teachings. 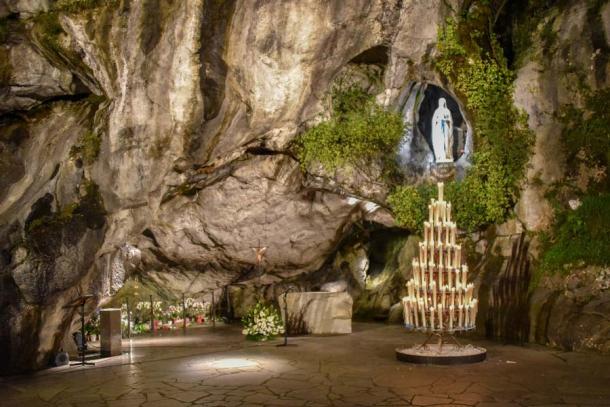 The Legend of the Shepherdess

Mosta is a town in the centre of Malta known for its large domed church designed by the architect Giorgio Grognet de Vassé who was also convinced the islands are the remnants of Atlantis. What a lot of visitors to the town don’t know, is that about seven hundred meters to the west of the church lies the 18th century Speranza Chapel (Chapel of Our Lady of Hope) on the edge of the valley of the same name.

Underneath this chapel is a cave shrine with a miraculous legend attached to it. According to the story, several sisters were tending their family’s sheep when corsairing invaders arrived on the island and entered the valley. Since one of the sisters had a limp she couldn’t escape and got left behind in the furore. Hiding in a cave she prayed to the Virgin Mary for help, promising to build a chapel if she was saved. Invaders approached the cave and were sure there could be no-one inside due to an intact spider’s web covering the entrance so they left her alone. The shrine and chapel were then built according to the promise the girl had made. The cave shrine underneath the chapel has statue of the girl praying, as well as statues of St. John and St. Luke.

The Painting with a Mind of its Own

From the outside, the Mensija Chapel in the town of San Ġwann looks similar to the hundreds of other religious buildings that are scattered all over Malta and Gozo. However, a close-up inspection of the gated entrance reveals a stairway to a rock-cut subterranean sanctuary.

According to legend, in the 1400s when the area was considerably more rural, a farmer built a house on this exact spot. One night he noticed a light coming from a natural underground cave that he had disturbed by building the steps to his farmhouse. In this cave he found a lit oil lamp and a picture of the Virgin Mary, but no signs of how they had got there. When the farmer took the picture to the parish priest, it somehow made its way back into the cave. The same thing happened repeatedly so it was decided that it was a sign that the cave ought to be turned into a shrine.

An extension of the legend says that a much earlier church dedicated to the Annunciation existed on the site, hence why the painting was found there. This church supposedly dated to before the Muslim period and had been lost to time. In the 16th century a chapel was built above ground to serve as an entrance to the cave which has kept much of its natural rough appearance. The first written reference to the chapel was in 1588 when it was known as San Leonardo tal-Ġebel (St. Leonard of the Boulders) at il-Ħofra ta’ Għar (The Sunken Cave). The chapel building today dates to renovations carried out in the 19th century.

Probably the most famous underground Catholic sanctuary in Malta is the Grotto underneath the Basilica of St. Paul in Rabat. The Acts of the Apostles in the New Testament recounts the story of how St. Paul was shipwrecked in 60 AD on Malta, referred to as ‘Melita,’ whilst making his way from Caesarea to Rome. According to tradition, St. Paul was very popular with the locals, especially the governor of the island called Publius whose father he healed of dysentery.

The story says that St. Paul spent three months in Malta living and preaching and it’s the Grotto in Rabat that’s supposed to have been his home during this period. In the 18th century a statue of St. Paul was erected in the Grotto which attracts thousands of visitors a year. Although it’s widely accepted that St. Paul was shipwrecked on Malta, the location of the shipwreck, and the place where he preached aren’t known with any certainty. Rabat is also the home of numerous Palaeochristian catacombs, making its subterranean religious legacy something quite spectacular. 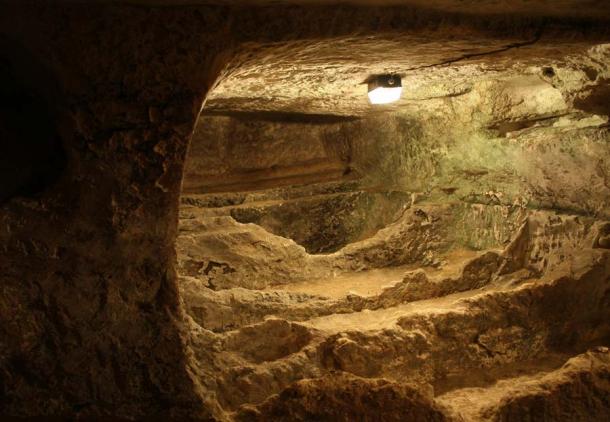 The cave of St. Patrick (Għar San Brinkat in Maltese) in Għargħur has quite a scary legend associated with it. It is said that demons once infested this natural cavity on the edge of the Great Fault causing people to be afraid to walk past it. When a painting of a crucified Christ and St. Patrick mysteriously washed up on the shore of the nearby village of Baħar iċ-Ċagħaq, it was taken to the cave in the hope that its presence would force the demons away. Apparently, this worked pretty well, meaning the cave could be transformed into a place of worship. Another legend says that the water of a spring which fills a basin in the cave each winter, has miraculous properties. The painting is still there to this day and a mass and feast are held in the cave each year. Experts think the cave may once have played a monastic role as well. Close by, another cave known as the Għar San Pietru, is thought to have been a church possibly for a rural community. It has a rock-cut seating area, a recess in the wall that probably served as an altar and the stucco remains of what are thought to be murals.

The Oldest Marian Shrine in Malta

The Sanctuary of Our Lady in the town of Mellieħa was built over the top of a very old cave church with various legends surrounding it. One story gives it a pagan origin, having been a site dedicated to the nymph Calypso of Odyssey fame. Interestingly, as a side note, there is a tradition that associates a cave in Gozo with the place where the Odyssey says Calypso held Homer for seven years. This story emerged because of Homer’s reference to it having taken place on the island of Ogygia, a place that has not been identified with any certainty but could have meant Gozo.

The pagan origin legend of the cave in Mellieħa continues with the shipwreck of St. Paul and St. Luke on Malta in 60 AD, when they converted the site into a Christian shrine. To cement its new role, St. Luke is said to have painted the Virgin Mary on the rock face. Other stories prefer to give the cave a Byzantine or Medieval origin but nothing is known for certain. The sanctuary on top of the cave that can be visited today, was built in several phases between the 16th and 18th centuries. In the 17th century a crypt, known as l-Madonna tal-Grotta was dug out of the rock near the cave. The altarpiece in the sanctuary is a fresco of the Virgin Mary and Jesus and is said to have miraculous properties. It’s in a Byzantine style and could date back as early as the 12th century.

St. Agatha was born in Catania, Sicily to wealthy high-ranking pagan parents in 234 AD. According to legend she became a Christian and made a vow of virginity. When the Praetor of Catania, Quintianus, decided he wanted to marry her, she rejected his advances. At the time the Roman Emperor Decius was persecuting Christians, so Quintianus used this opportunity to try to force her hand. He tried many nefarious ways to manipulate her into submission including torture, but nothing worked.

Eventually she was sentenced to death. An earthquake put a stop to her being burnt at the stake, but she died soon after in prison. In Malta there is a tradition that during the persecution of Decius, Agatha moved to Malta temporarily where it’s said she prayed and preached, spending most of her time in a crypt carved from out of the rock in Rabat. This crypt became a cave church and is adjoined to a series of earlier Palaeochristian catacombs. Since similar funerary structures can be seen in the cave church, it’s thought it was also a catacomb originally before being modified for worship. The church was rectangular, with an apsed section and rock-cut seating areas. It has many frescos dating to the 15th and 16th centuries which may have been painted over earlier Siculo-Byzantine ones.

Legacy of the Underworld

For rural communities cave churches were accessible and easy to maintain making them convenient places of worship. However, it seems that practical considerations were not the only reasons people were drawn to these dark, damp and quiet places. The stories associated with them, many having supernatural elements, elevated their importance and made them the focal points of different villages. It’s not possible to prove the veracity of the legends, some of which do have hints of historical fact mixed with oral and written traditions. But it’s this semi-mythical element that was probably the most alluring. From Ancient Egypt to the Classical Period, the subterranean sojourns of souls and deities have been central to many myths in multiple cultures. It’s tempting to see a grafting of these very old stories onto later religious legends and practices. Cave churches may have given communities a subconscious link to the underworld, which is inextricably tied to humanity’s journey and the cycle of death and rebirth.