Next to a sacred lake near the Karnak Temple in Luxor, Egypt, archaeologists and engineers have re-erected a fully restored Karnak obelisk that was originally constructed and raised in 1457 BC, in honor of the New Kingdom ruler Queen Hatshepsut. The bottom two thirds of the resurrected pink granite Karnak obelisk were never found after the entire structure was either knocked down by an earthquake or intentionally destroyed.

The resurrection of the entire full-sized Karnak obelisk, with the original top third and a modern lower reconstruction, was announced on April 9, 2022, by the Egyptian Ministry of Tourism and Antiquities , in a post on its Facebook page. 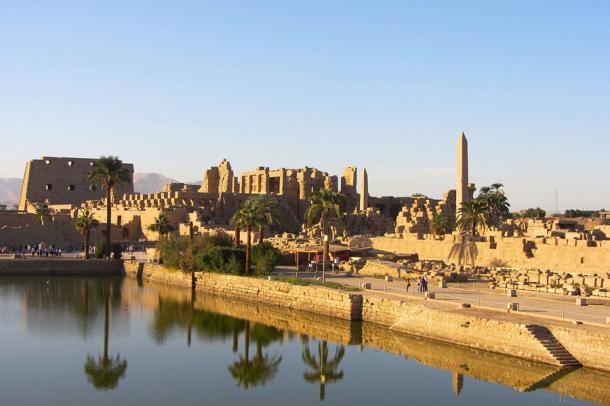 The Precinct of Amun-Re, the largest of the precincts of the Karnak Temple complex, as seen from the sacred lake in Luxor, where the Karnak obelisk dedicated to Queen Hatshepsut was recently re-erected. (Taranis-iuppiter / CC BY-SA 3.0 )

This obelisk was one of two that were dedicated to the fifth pharaoh of Egypt’s Eighteenth Dynasty , who served as queen for 21 years from 1479 to 1458 BC. Hatshepsut was the second woman in ancient Egypt to ascend to the position of pharaoh, following in the footsteps of Sobekneferu, the last ruler of the Twelfth Dynasty of the Middle Kingdom, who’d become the first female pharaoh approximately 300 years earlier.

But while Sobekneferu is largely unknown to the general public today, Hatshepsut remains one of the most celebrated and acclaimed of all the Egyptian pharaohs. She ruled over Egypt during a time of great prosperity and sponsored numerous monumental building projects that helped make ancient Thebes (modern-day Luxor) one of the most developed cultural centers in the ancient Nile Valley.

Mostafa Waziri, the Secretary-General of the Supreme Council of Antiquities, explained that the restoration and re-erection of the Queen’s obelisk was part of a larger restoration project taking place in Luxor, where a sprawling collection of ancient Egyptian temples, tombs, and monuments built over many centuries can be found. According to Waziri, a careful study of the obelisk showed that it was in danger of crumbling into pieces if it were to remain laying on the ground indefinitely, and the decision was made to restore and erect it to make sure it could be preserved.

The obelisk restoration project was completed just last week, and the obelisk was lifted back into a standing position by a team of engineers from the Egyptian armed forces. 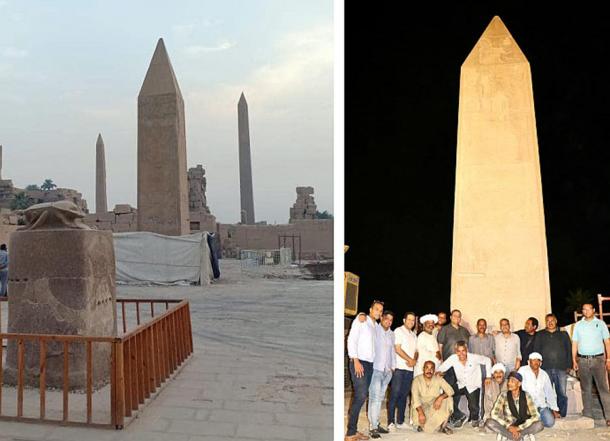 The re-erected Karnak obelisk as it stands now on the avenue near Karnak Temple. ( Ministry of Tourism and Antiquities )

The restored obelisk is made from pink granite. In its current form it is approximately 36 feet (11 meters) high and weighs about 99 tons (90 metric tons). It is decorated with carved inscriptions that describe Queen Hatsheput’s relationship with the Egyptian god Amun, who was recognized as the most prominent of all the gods in the New Kingdom era.

Hatshepsut was known for her devotion to Amun and was said to have donated significant funds to the priests of Amun and their religious order. This influential group in turn supported her candidacy for pharaoh, which helped assure she would be selected over her stepson Thutmose III.

Additional inscriptions pay further tribute to Amun, revealing the obelisk to have been dedicated to both the Queen and the most exalted of all Egyptian deities in the second millennium BC.

In reality, the obelisk that was restored and re-erected only includes the upper part of the original monument that lay on the ground at Karnak Temple for centuries.

At some point in the distant past the obelisk fell over and broke into multiple pieces. Egyptologists speculate that a massive earthquake may be responsible for this event, although intentional sabotage of the obelisk can’t be ruled out.

The pieces of the obelisk were originally left on a pile of rocky rubble outside Wadjet Hall , a structure built on Karnak Temple grounds by the pharaoh Thutmose I (Hatshepsut’s father). They remained there until the early 20th century, when they were rediscovered by French archaeologist Georges Legran. A group of workers hauled the intact upper section of the obelisk to a location near the temple’s sacred artificial lake, and that was where it stayed for the next 100-plus years.

Other, much smaller fragments of the obelisk were also salvaged during excavations on temple grounds. Many of these were sold to museums and are still on display today.

There is no way to know for sure what the exact dimensions of the obelisk were when it was whole, but a good point of comparison might be Hatshepsut’s other obelisk, which is still standing at Karnak and is fully preserved in its original form.

This towering obelisk is nearly 100 feet (30 meters) tall and weighs 378 tons (343 metric tons). If the newly restored obelisk was built to similar dimensions, it would mean that about one-third of it had been preserved. 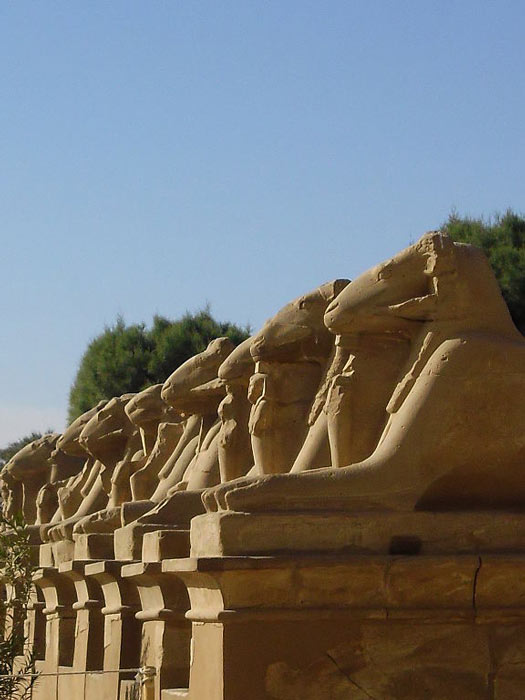 In November 2021, the Egyptian Ministry of Tourism and Antiquities opened the newly restored Avenue of the Sphinxes a 3,000-year-old road that connects the Karnak Temple with the Luxor Temple. (Sara Nabih / CC BY-SA 4.0 )

Following an Avenue into Ancient History

The Egyptian Ministry of Tourism and Antiquities is seeking to increase the flow of tourist money coming into the country. Its incredible collection of ancient stone monuments remains the country’s top selling point, and the Ministry has launched an extensive renovation project at Luxor in an attempt to lure more visitors to one of the most famous ancient sites preserved anywhere in the world.

Just last year, the Ministry opened the newly restored Avenue of the Sphinxes a 3,000-year-old road that connects the Karnak Temple with the Luxor Temple . Now, visitors who arrive at the Karnak Temple complex along this route will be able to see and photograph both of the impressive obelisks that were built to honor Hatshepsut more than 3,400 years ago. They stand as a testament to Egypt’s glorious past, and especially to the woman who became its first great queen.

Top image: The upper third of the original Karnak obelisk, one of several obelisks dedicated to Queen Hatshepsut of 14th-century BC Egypt, which was recently re-erected in Luxor near the Karnak Temple where it was toppled by an ancient earthquake or intentionally destroyed. Source: The National News