A new paper published in the Bulletin of the Asia Institute argues that an ancient silver bowl found in Lhasa 50 years ago displays in Greek-style reliefs scenes from a Jewish version of the Alexander legends. This body of legend grew around the real and fictional feats of the Macedonian conqueror, and was popular from the third to the 12th century AD. Until now, the most accepted interpretation of the scenes depicted on the bowl has been a 1973 one that attributes them to Homer’s Iliad. Now, the study by French researchers contends that the scenes actually originate in a previously unknown fifth-sixth-century Jewish tradition of Alexander legends, reports Haaretz.

According to the writers from CNRS, University Paris Sciences & Letters, and the College de France respectively, the bowl depicts Alexander three times: once picking fruit from the Tree of Life and twice drinking from the Fountain of Life. They also claim the bowl has the first-known depiction in the eastern world of a terrestrial paradise. 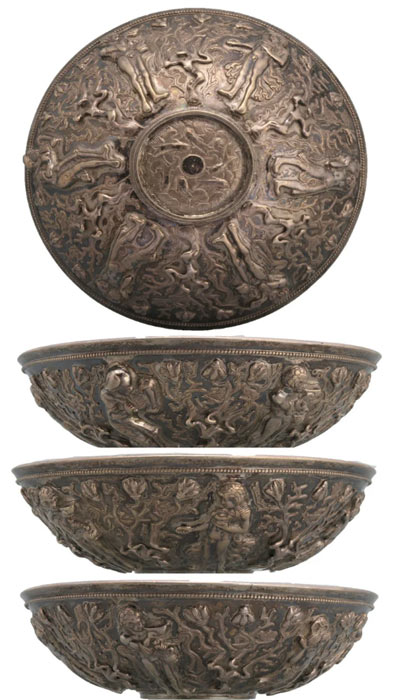 According to the latest study, the tiny Tibetan bowl is covered in Alexander legends and Alexander the Great is depicted on the bowl three times in vivid detail. ( Ancient Orient Museum, Tokyo )

The bowl is actually made of a silver and copper alloy and has images upon its exterior raised 9 millimeters (0.3 inches) above its surface while the interior is smooth. Apart from the three depictions of Alexander the Great , there are three other male figures. Of these, two are Indian carriers of the Water of Life and the third is a priest playing the dhol or an Indian drum, the study authors say.

Between each of these three men is a gnarled tree with a snake climbing up toward a nest . In each nest, the detail is different. In one there are eggs, the second has a bird feeding chicks, and the third is an empty nest, perhaps showing that the snake has eaten the chicks. Between the figures of Alexander picking fruit from the Tree of Life and drinking from the Fountain of Life, however, the birds are nesting in healthy trees that seem to be in eternal spring. Together, these details tell Alexander legends but in a style that is uniquely Jewish in content and style. 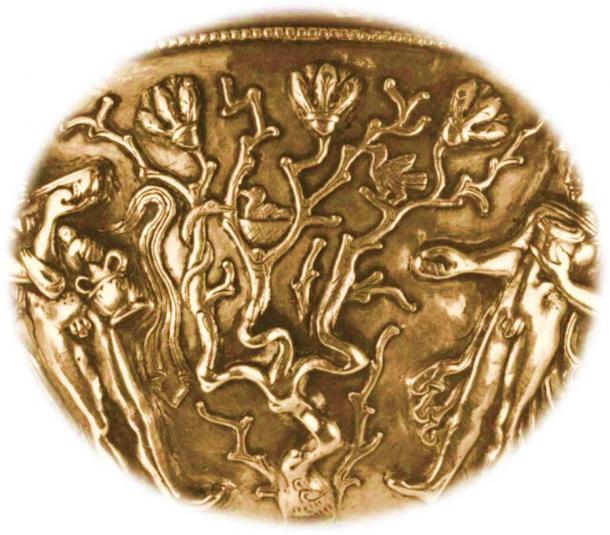 The Tree of Life with a snake approaching bird on a nest, with Alexander on the left and the right of the tree. ( Ancient Orient Museum, Tokyo )

What Is Specifically Jewish about the Bowl’s Imagery?

So, what do the authors base their claim of the bowl displaying a Jewish version of the Alexander Romance on? On several things actually. The most important one being that the nude figure represented thrice on the bowl, whom they believe to be Alexander the Great, is unmistakably circumcised, a practice not known among the Macedonians or among the Indians or Iranians conquered by the Macedonians. This suggests that the person who made or commissioned the bowl was Jewish. Remember, this is centuries before the Arabic conquest of Central Asia, and the bowl was originally found in Tibet.

There are two extant texts that mention Jewish Alexander legends related to his visit to the Garden of Eden . One is a passage written in Aramaic in the Babylonian Talmud that dates to the sixth century AD. It talks about Alexander washing his face in the Water of Life and arriving at the Gate of the Lord through which the righteous may pass.

The second Jewish Alexander legend text is Sefer Toldot Alexandros ha-Makdoni (the history of Alexander the Macedonian), part of a collection of Hebrew texts compiled in 1325 AD that is preserved in a manuscript at Oxford University. It recounts how Alexander was circumcised by his physicians so he could enter the Garden of Eden as a righteous man. Elements from both these texts seem to be represented on the Tibetan bowl.

Apart from these specific references to Alexander’s visit to the Garden of Eden, accounts and legends of his life and adventures abound in ancient Hebrew literature, showing his deep imprint on the Jewish world of Alexander’s time. 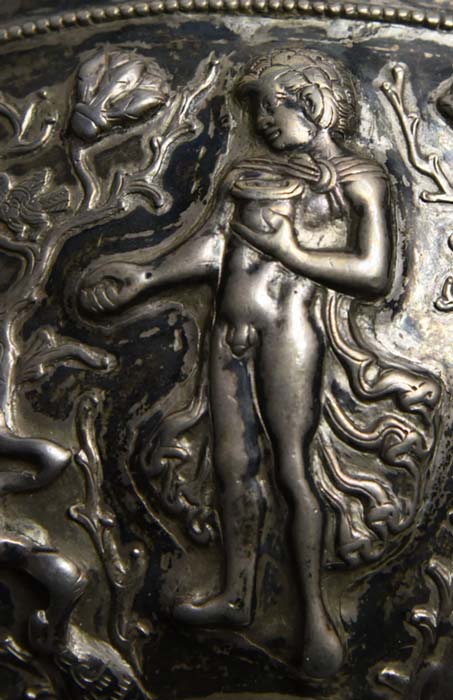 Alexander with a handful of frankincense, and his member has clearly been circumcised, a practice unknown in Central Asia when the bowl was made there. ( Ancient Orient Museum, Tokyo )

But what makes the authors identify three of the figures depicted on the bowl as Alexander? Largely his trademark hairdo. The figure is of a young man, Alexander died young at the age of 32, with short and abundant hair with two curls flipped upward like the mane of a lion. “Alexander was probably born when the Sun was in Leo. The lion was a symbol of kingship and Macedonian kings were showing themselves hunting the lion, as heirs of Heracles, the Greek hero who fought the Nemean lion,” said lead study writer Professor Anca Dan to Haaretz.

His being nude fits in with Greek Alexander legends. Specifically, where the King is said to have consulted the Oracle of the Sun and Moon at the end of the Earth, something that required him to be naked. “The bare Alexander has only a royal mantle or a scarf draped over his shoulder, a symbol of royalty in the Sassanian culture of Iran, which continued to influence Central Asia after the Hunnic invasions, in the 5th century C.E.,” Dan added.

The highly original interpretation of the reliefs on the fifth-sixth century AD Tibetan bowl manufactured in Central Asia suggests that not only ancient Greek, Roman and Indo-Iranian but also Jewish traditions may have contributed to the development of the Alexander legends.

Top image: Closeups of images of Alexander (the two leftmost figures), an Indian priest, and a servant shown on the silver Tibetan bowl that depicts Alexander legends with a Jewish “twist.” Source: Ancient Orient Museum, Tokyo