Archaeologists who’ve launched exploratory digs along the path of the HS2 high-speed rail project in England have made some fascinating and amazing discoveries. The latest addition to the list of remarkable finds was unearthed near Wendover, Buckinghamshire, as a team of archaeologists affiliated with the private contractor Fusion JV successfully excavated a 1,500-year-old Anglo-Saxon cemetery that contained the graves of 141 men, women, and children. The amazing discoveries were described in a HS2 press release .

This remarkable Anglo-Saxon cemetery, which was occupied by people who lived and died in the fifth and sixth centuries AD, is one of the largest Anglo-Saxon graveyards ever found in England. In addition to the skeletal remains of the 141 individuals, the HS2 archaeologists also discovered a veritable gold mine of burial goods entombed alongside their deceased owners. They uncovered quite an eclectic range of items, including assorted types of jewelry, knives of various shapes and sizes, spearheads, fine glass bowls and beakers, belt buckles, more than 2,000 beads, ivory trinkets, and personal grooming tools such as ear wax removers, tweezers, and combs. 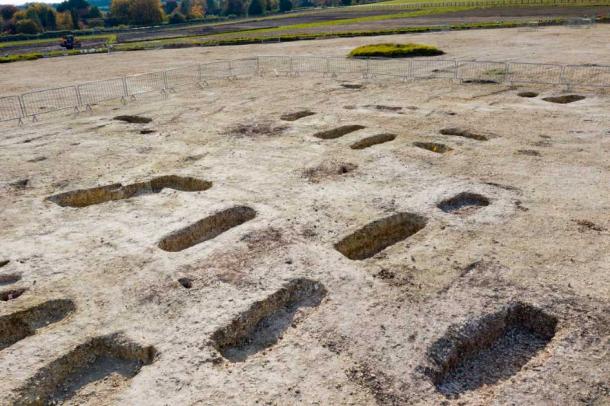 Site of the HS2 excavation of a huge Anglo-Saxon burial ground in Wendover, Buckinghamshire, England where 141 burials were uncovered along with a treasure trove of burial goods and artifacts. ( HS2)

“This stunning set of discoveries on the HS2 route can tell us more about how our predecessors lived, fought and ultimately died,” said popular historian and television presenter Dan Snow, who was quoted in a press release from HS2 announcing the exciting discovery. “It is one of the best and most revealing post Roman sites in the country and it was thrilling to join the team as they uncovered their wonderful finds.”

For a long time, little has been known about Anglo-Saxon culture and society in the first millennium AD. This is largely because artifacts from that era have rarely been recovered during archaeological digs.

But HS2 excavations have been taking place in many previously unexplored locations, and the ruins unearthed, and items recovered during these explorations are helping to fill in gaps in the historical record, including those associated with the Anglo-Saxon period 1,500 years ago. 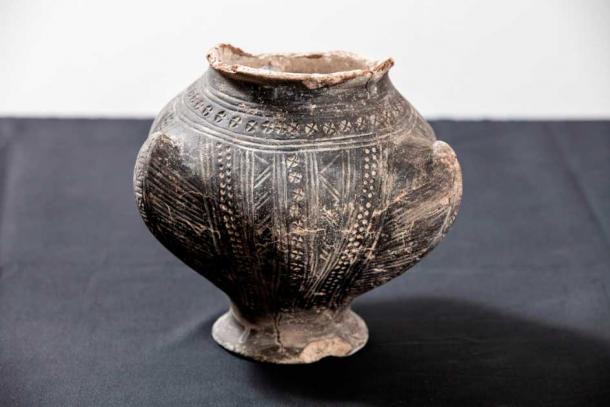 One of the skeletons found in the cemetery, identified as a male between the ages of 17 and 24, was buried with a sharp iron object firmly embedded in his vertebrae. 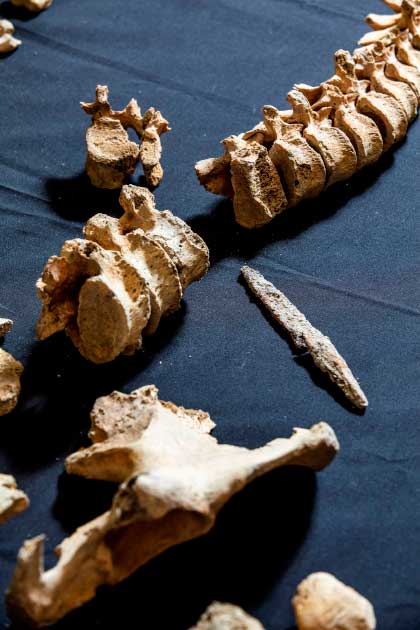 One female skeleton was undoubtedly from a wealthy family, as buried alongside her was a large and impressive cache of valuable personal items. Her collection of burial goods included ornate glassware, many rings and brooches, iron belt fittings, and several objects that had been carved from ivory.

Dr. Rachel Wood, the lead archaeologist for Fusion JV on this project, described the unearthing of the huge Anglo-Saxon burial ground as a “once in a lifetime discovery.”

“It’s rare to discover Anglo-Saxon cemeteries, especially with this many individuals—men, women and children—and an amazing range of grave goods,” she told the Guardian . “Almost all the individuals were buried with fantastically decorated brooches, but we’ve also found glass and amber beads, swords, shield bosses, spearheads, fantastically decorated pottery jewelry—quite a lot of unique objects. The fifth and sixth centuries are not ones we know a lot about, and all the objects we found will be able to tell us a lot about these people.”

It would seem this particular graveyard was reserved primarily for the relatively rich and powerful. This is revealed by the fact that many of their burial goods were imported items from other parts of Europe that would have been costly to manufacture and transport.

The HS2 Project Continues to Deliver the Goods

Fieldwork at the Wendover site was completed in 2021. Approximately 30 archaeologists working under the authority of HS2 contractors INFRA JV and Fusion JV discovered evidence of activity that could be traced back to many eras, including the Neolithic period , Bronze Age , Iron Age , and Roman period.

But it was the Anglo-Saxon cemetery that stood out as the most noteworthy find, since it offered information about a culture and historical era that are still not well understood.

“As we near the end of our archaeology field work on Phase One of HS2, we are just at the beginning of our understanding of how the discoveries will improve our historical knowledge of Britain,” commented Mike Court, the HS2 project’s Lead Archaeologist. “The archaeological finds made at this site in Wendover will not only be of interest to the local community but are of national importance, providing a valuable insight into life in Anglo-Saxon Britain .”

Work along the HS2 route has been a boon for archaeologists who study the cultures of ancient Britain. More than 1,000 experts have participated in digs at 60 sites unearthed between London and the West Midlands over the past three years, and the number of newly discovered sites will undoubtedly continue to grow as the project progresses.

Unfortunately, some of the larger sites will have to be constructed over eventually to make way for the railway line. In the meantime, archaeologists are busy removing as many artifacts and relocating as many ruins as they can from the HS2 digs, to make sure the majority of what has been found can be preserved in museums and for academic and scientific study.

Top image: Work on the HS2 rail project across the UK landscape has once again yielded treasure with the discovery of a major Anglo-Saxon cemetery at Wendover, Buckinghamshire. The site has revealed 138 graves, countless preserved burial goods, and many valuable historical artifacts. Source: HS2