An ancient surgeon’s tomb has been discovered in Peru containing his grisly surgical weapons, including knives, needles and tumis – sharp metallic tools used for medical or sacrificial purposes. Ancient Peruvians are well-known for their advanced surgical techniques including cranial surgery, which was often successful.

Andina news agency reports that the tomb was unearthed in a ceremonial temple at the Huaca Las Ventanas archaeological site in Lambayeque, Peru. It belonged to a surgeon of the Middle Sican period (900 – 1050 AD),

The Sican culture, also known as the Lambayeque culture for the region they once inhabited, was one of the many cultures that existed in Peru prior to the coming of the Incas. The Sicans inhabited the north coast of modern-day Peru from about 750 to 1375 AD.

The deceased surgeon had been placed in seated position with his legs crossed. Within the grave, archaeologists found various grave goods including a golden mask with feathered eyes, a large bronze breastplate, and gilt copper bowls, which speak of his high status, as well as the surgical implements. 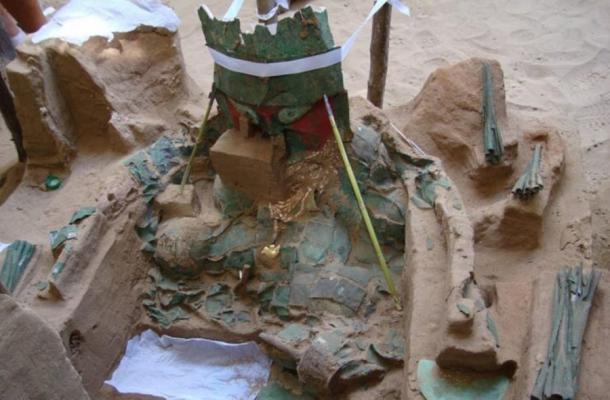 The elaborate tomb of a surgeon found in Lambayeque, Peru. Credit: Andina

The Director of the Sican National Museum told ANDINA: “The most interesting thing was the set of awls, needles, and knives, several of which with a cutting edge on one side and a blunt edge on the other side; the sizes vary, and some have wooden handles”.

According to Arkeonews, the tomb contained “about 50 knives in total, some with a single cutting edge. Most are a bronze alloy with high arsenic content. Some have wooden handles. There is also a tumi, a ceremonial knife with a half-moon blade. By the tumi was a metal planchette with a symbol associated with surgical instruments. Two frontal bones, one adult and one juvenile, were found next to the planchette. Marks on the bones indicate they were deliberately cut with trepanation techniques.”

Carlos Elera, director of the Sicán National Museum, said that the implements are consistent with those used in human skull surgery and the findings indicate the surgeon was a specialist in cranial trepanations. 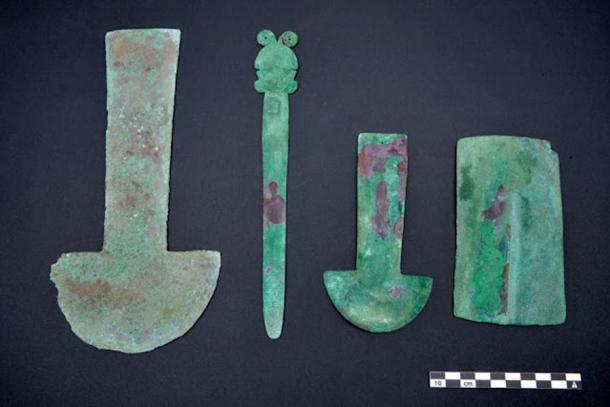 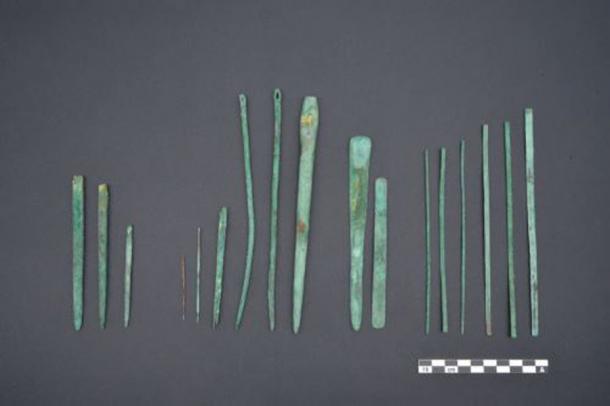 Numerous archaeological discoveries have revealed that cranial surgery was frequently performed by highly skilled surgeons in ancient Peru, even as far back as 4,000 years ago.

Skulls with neatly drilled holes, some with healed bone around the edges, show evidence of  trepanation – the act of scraping, cutting, or drilling an opening into the cranium.

A study in 2018 revealed that trepanation was so expertly  practiced in ancient Peru  that the survival rate for the procedure during the Inca Empire was about twice that of the American Civil War – when, more than three centuries later, soldiers were trepanned presumably by better trained, educated and equipped surgeons.

Very little is known about what, if any, anesthesia was used during these surgical procedures.

“We do not know how the ancient Peruvians prevented infection, but it seems that they did a good job of it. Neither do we know what they used as anesthesia, but since there were so many (cranial surgeries) they must have used something – possibly coca leaves,” said Dr David S. Kushner, clinical professor of physical medicine and rehabilitation. “Maybe there was something else, maybe a fermented beverage. There are no written records, so we just don’t know.”

Interestingly, a piece of bark from an unknown tree was found in the recently unearthed surgeon’s tomb, and researchers believe it was used for medicinal purposes as an analgesic or anti-inflammatory infusion, in the same way that white willow bark basically makes aspirin tea. Further research may provide crucial insight into how the ancient Peruvians managed anesthesia in their surgical procedures