There are many interesting creatures in the world of Greek mythology, but some of the most daunting are the harpies. Harpies are half-woman, half-bird creatures that are said to be the spirits of winds during storms. These creatures are primarily featured throughout Homer’s works and are described at times as fascinating creatures and others as horrible monsters.

But what exactly do harpies do, and what makes them so interesting besides their ability to fly? A look into the history of these legendary creatures and their actions throughout Greek and Roman mythology will provide further insight.

Beauty is in the Eye of the Beholder

Harpies were depicted as having the head of a woman and the body of a bird. Often, they had pale faces and were described as being quite ugly compared to ordinary women, though other references describe them as beautiful. ‘Beautiful’ harpies are normally seen in art, such as pottery and drawings, while ‘ugly’ harpies are described in literary works throughout Greek and Roman mythology . Ovid, a Roman poet, once described them as “human vultures.”

The harpies were also swift creatures. Since they were known as the spirits of storm winds, their wings would take them soaring through the skies as fast as these strong winds. Hesiod, a Greek poet from the 7th and 8th centuries BC, described two specific harpies, named Ocypete and Aello, as having “lovely hair” and constantly swooping through the wind like powerful birds.

While Hesiod seemed enamored with the creatures, later Greek writers were not as kind. Harpies were continually described as vile, disgusting creatures known for committing terrible acts. An ancient Greek prophetess of the god Apollo described the harpies as black and disgusting, with “repulsive breath” and “hateful” tears dripping from their eyes.

Although some writers described them as having giant talons to claw and steal, others claimed the harpies had human arms in addition to their wings. Hyginus, a Latin author from the 1st century AD, claimed that some harpies were the reverse of the common description, with a bird head and human arms, breasts, and genitals.

In addition to being spirits of the wind, harpies were known for their quick thievery. Their name translates to “swift robbers,” as they were known to steal their victims’ food to let them starve. They also absconded with entire people, grabbing them with their large talons and carrying them to the Erinyes, goddesses of vengeance, for punishment. Harpies would also torture their victims on the way to Tartarus, the abyss of torment where the Erinyes reside, as preliminary punishment for their crimes on Earth. The majority of their victims were murderers. 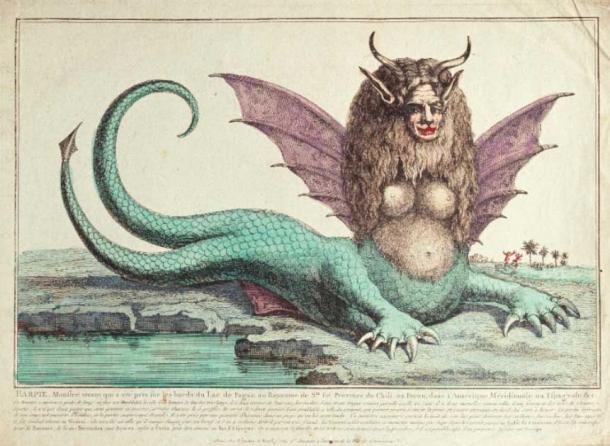 From the Sea to the Skies

The earliest description of the harpies’ background comes from Hesiod, who described the harpies Ocypete and Aello. He claimed that these two harpies were the daughters of Thaumas, a sea god, and Electra, a famous water nymph that was the daughter of Oceanus and Tethys. This also made them siblings of Iris, goddess of the rainbow and messenger of the gods, as well as Hydaspes and Arke, river gods that were also the children of Thaumas.

Valerius, a Roman poet, claimed that the two harpies were instead daughters of Typhon, a deadly serpentine giant in Greek mythology. Other sources claim that they are the children of Pontus, an ancient sea god, and Gaea, the ancient goddess of all life on Earth. They have also been described as children of Poseidon. Although they are creatures of the air, at least one of their alleged parents in each story is usually a god of the sea.

Virgil, a Roman poet, later added a third harpy to this pair of siblings, named Celaeno. Their names are all related to their abilities, as Aello translates to “storm swift,” Ocypete to “the swift wing” or “swift runner,” and Celaeno to “the dark.” Homer also identified a fourth named Podarge, which translates to “fleet foot.”

In later stories, these four harpies have offspring. Podarge gives birth to two immortal horses named Xanthus and Balius, who are fathered by the wind Zephyrus. Later, she also births two more horses named Phlogeus and Harpagos, who were given to Castor and Pollux. According to the Greek poet Nonnus, Aello and the wind Boreas had two horses named Xanthos and Podarkes, who King Erechtheus of Athens later owned. 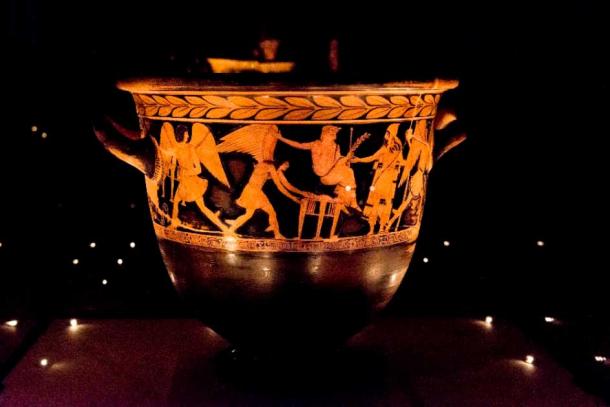 The Harpies’ Torture of Phineus

Though harpies can be found in many Greek myths, the most common is the story of King Phineus of Thrace. According to the story, Zeus had given Phineus the gift of prophecy, but he grew angry when Phineus used his power against the gods. Phineus had allegedly seen and publicized a hidden plan of the Olympian gods, which was seen as betrayal in the eyes of Zeus.

Zeus used the harpies as personal hounds for his revenge against Phineus. Zeus had Phineus tied up, kidnapped, and transported to a deserted island with nothing but a full buffet of the most delicious food imaginable. The catch? Zeus commanded his harpies to steal the food before Phineus could eat much of it, leaving him on the brink of starvation for long periods of time. Other versions of the story also describe the harpies as feasting on the delicious food themselves, or spoiling the food they could not snatch by covering it in foul bird droppings.

This torture continued until the arrival of famed Greek hero Jason and his troop of Argonauts . Phineus begged the group to save him from the torture of the harpies, and the group obliged. They got the Boreads, brothers of the wind, to chase off the harpies and free Phineus from his torment.

Some stories said that the harpies were to be killed by the Boreads, but fled to nearby areas. One perished after falling into the Tigris, while the other escaped to the Echinades islands, off the coast of Greece. Although she was eventually found by the Boreads, they spared her life in exchange for a promise to no longer torture Phineus. Other stories, however, claim that just before the Boreads were going to kill the harpies, Iris (or Hermes, depending on the story) appeared and commanded that the harpies be spared. The harpies then returned to a cave in Minoan Crete to live out the rest of their days in peace.

In yet other versions, both the Boreads and the harpies died in their battle, which still left Phineus free. He repaid Jason and the Argonauts by helping them pass through the Cyanean Rocks, or Clashing Rocks. According to the story, the Clashing Rocks would come together and crush anyone who tried to pass through. Using Phineus’s advice, the Argonauts sent a dove through the rocks to see how long they had to pass through safely. Using this information, they rowed quickly and made it through, only losing a small part of their ship in the process. The Clashing Rocks never clashed again after this incident.

Unfortunately, the story doesn’t end there for Phineus. According to Tzetzes, a poet from the 12th century, Phineus escaped the island and later had two daughters named Eraseia and Harpyreia. As a last form of revenge, the Boreads snatched his daughters away, never to be seen again. It has been speculated that this was the original story, and from this situation came the stories about the harpies. 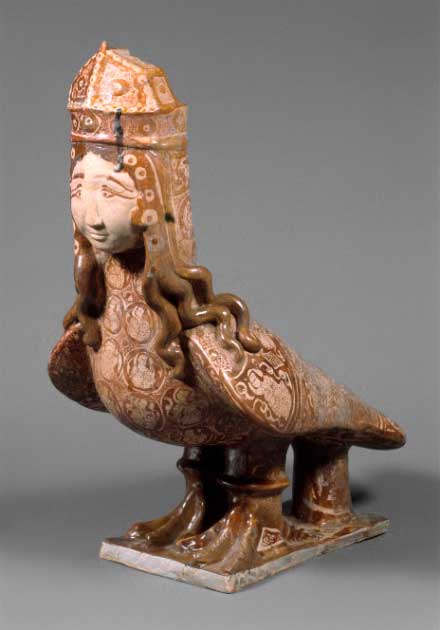 Harpies Spotted in the Middle Ages

Harpies remained a consistent theme throughout literature in the Middle Ages. In Shakespeare’s Tempest, the spirit Ariel once appeared as a harpy and used his wings to make an entire feast disappear. He then claimed this as an opportunity to accuse Alonso, Antonio, and Sebastian of being instruments of sin.

In The Inferno, Dante described the seventh ring of hell as woods infested with harpies. According to the story, the seventh ring is the punishment for suicide, and those who died in this way will suffer extreme torture at the hands (or talons) of the harpies.

Orlando Furioso , an Italian epic poem written by Ludovico Ariosto in 1516, described a story nearly identical to the story of Phineus. In this story, Emperor Senapo attempted to fight God by sending an army toward the Garden of Eden. As punishment, the emperor was blinded by God and tortured by harpies who attacked him and ate his food, leaving behind nothing but contaminated scraps. He eventually obtained help from the hero Astolfo, who agreed to help him get rid of the harpies.

Astolfo told the blind emperor to seal his ears with wax so he could not hear, and then had him call for more food to be served. When the harpies came to snatch the food, Astolfo scared them off using his magic horn. He then followed the harpies and chased them into the entrance of Hell by the Nile River.

In addition to these stories, harpies have been portrayed in many pieces of artwork. While they were predominantly painted on pottery, they were also captured in paintings, such as William Blake’s “The Wood of the Self-Murderers: The Harpies and the Suicides.”

Overall, harpies have played a central role in Greek and Roman mythology, as well as appearing in more recent pieces of art and literature. While ugly and dangerous, they often do not act of their own accord and are instead commanded to do the work of others, such as Zeus or the Erinyes. The next time you sit down to feast, be grateful the harpy is not a real creature, or you might be running for your life!

Hoakley. (February 11, 2020). Orlando Furioso: The Quest of Jealousy, and the Flight of the Hippogriff . The Eclectic Light Company. Available at: https://eclecticlight.co/2020/02/11/orlando-furioso-the-quest-of-jealousy-and-the-flight-of-the-hippogriff/

Woodcut of a Harpy . British Library. (n.d.). Available at: https://www.bl.uk/collection-items/woodcut-of-a-harpy#:~:text=Shakespeare’s%20magical%20and%20metaphorical%20harpies,’with%20a%20quaint%20device’