Giant cranes were one of the most popular pets in medieval Ireland. However, the luxurious cranes all but vanished from the country over 300 years ago, until recently when a mating pair was spotted together in a wild bog. This offers the tantalizing suggestion that giant cranes have once again chosen Ireland as a more permanent nesting location.

Standing about 1.2 meters (4ft) tall, with a wingspan of more than 2.1 meters (7ft), cranes are fabled for their complex display behaviors, which include bows, pirouettes and bobs. Once commonly kept in  Ireland, it is believed that the destruction of their natural habitat, an increase in predators such as foxes, as well as their desirable flavor on the dinner table, drove them out by 1600 and 1700 AD. However, several have been spotted recently suggesting the glorious bird is returning to one of its traditional ancient breeding grounds.

The ancient mythologies of  Greece portrayed dancing cranes as an expression of love, and a celebration of life, and they were associated with both the gods  Apollo and Hephaestus. The cranes’ spectacular mating dances led them to become highly symbolic birds in  Native American  cultures and across the Aegean, South Arabia, China,  Koreaand Japan. An ancient  Japanese legend  says anyone who folds a thousand origami cranes will be granted a wish by a magic crane.

The crane was also an integral part of Irish culture and folklore and a relatively common sight, but cranes haven’t bred in Ireland for more than three centuries. However, now, Irish wildlife experts have reported a pair of cranes have been spotted in a peat bog in the Republic of Ireland’s midlands, and this suggests the birds are once again returning to the Emerald Isle.

In modern terms the Eurasian Crane looks like an exotic bird, but a 2016  Green News Ireland  article says they were “the third most common domestic pet in ancient Ireland.” This article was discussing Lorcán Ó Tuathail’s 2016 book  Corr Scéal – (Crane Notions)  that explained how “Crane  bones are the fourth most common species of bird bone in the Irish archaeological record.”

According to a report in the  BBC, Bord na Móna was an Irish peat producer who closed operations in January this year and “rehabilitated thousands of hectares of  boglands, rewetting the drained sites.” The pair of birds were spotted on bog land belonging to this company but their exact location remains a secret in an attempt to protect the birds as they reacclimatize. 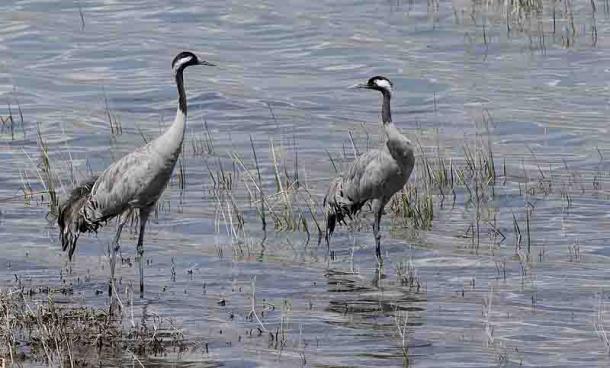 High Hopes For The Irish Crane

Mark McCorry was the lead ecologist for Bord na Móna and he told the BBC that the return of the nesting pair of cranes “was very significant.” While the bird still comes to the island during the winter, this is the first time they have been seen in the breeding season for 300 years, and this is a great indication that the species is trying to re-colonize Ireland. Mr McCorry said he was reasonably optimistic that the birds would successfully breed after failing to produce eggs last year. Like with any new union in nature it takes a little while to get past the immediate flurry of feathers, and to become first mates, then successful breeders. Mr McCorry speculates that if this pair of cranes takesoff genetically, ” Wild crane numbers ‘could rise by 50%’ “.

But even if this pair of cranes don’t get off the ground, a juvenile crane has already been identified in an estuary in County  Dublin last autumn suggesting another pair of cranes are breeding successfully somewhere in Ireland. Niall Hatch, of Birdwatch Ireland, told the BBC that cranes returning to the island would be “wonderful”. He also noted that there had been increasing reports of cranes flying over Ireland in recent years, such as a flock of five that were spotted in  Wexford two years ago and in 2016 at Lough McNean in Fermanagh, Northern Ireland.