A team of archaeologists studying life-size rock carvings of animals in the Saudi Arabian desert were shocked to discover the true age of these impressive stone sculptures. These carved figures of giant camels were  first found in 2018 , and it was originally estimated that they were about 2,000 years old. But the new analysis utilized more advanced dating methodologies, and revealed that these striking reliefs were  actually made between 7,000 and 8,000 years ago , forcing a major re-evaluation of their meaning and significance.

As of now, these are the oldest three-dimensional rock sculptures of animals discovered anywhere in the world. They pre-date the pyramids of Giza and England’s Stonehenge by several thousand years. 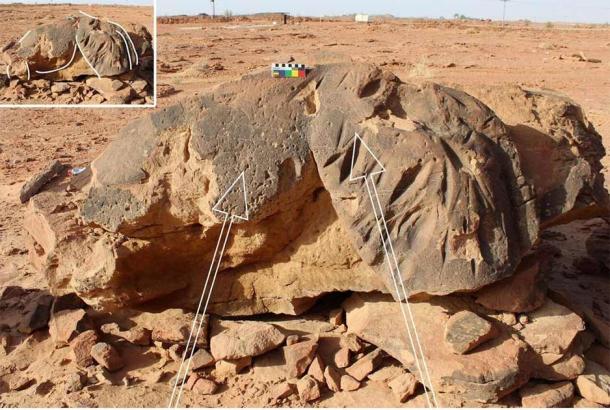 With over 1,500 rock art sites  already discovered, with some dating back as far as 12,000 years ago, Saudi Arabia has become a popular destination for archaeologists seeking insights into ancient rock-art-making practices.

The archaeologists involved in the study of the Camel Site in northwestern Saudi Arabia’s Al Jawf province were affiliated with the Saudi Ministry of Culture, the Max Planck Institute for the Science of Human History, the French National Centre for Scientific Research, and King Saud University in Riyadh.

At the beginning of their research, they were working under the assumption that the  animal reliefs  had been carved into the stone in the late first century BC or early first century AD. Since rock art can be hard to date, the original guess was based on their similarity to 2,000-year-old rock reliefs found near the  Jordanian city of Petra .

However, a closer examination of the figures’ markings indicated the sculptures had been carved with  stone tools  rather than metal tools (consistent with a Neolithic dating instead of the previous late  Iron Age  estimate). Weathering and erosion patterns fit with an earlier-than-estimated timeline as well, and a geological survey of the rock’s top layers also helped reveal the camel sculptures’ true age.

The archaeologists identified 21 carved three-dimensional reliefs at the site in total. Most were of camels, but horses and horse-like creatures were also represented. The striking sculptures were carved into three rocky spurs, and the creators would have had to climb up on scaffolding to reach the upper areas of these outcrops.

The figures they created were highly realistic, and from the standpoint of ground-level observers the animals would have seemed to emerge out of the rock as if ready to come to life and step out into the real world. 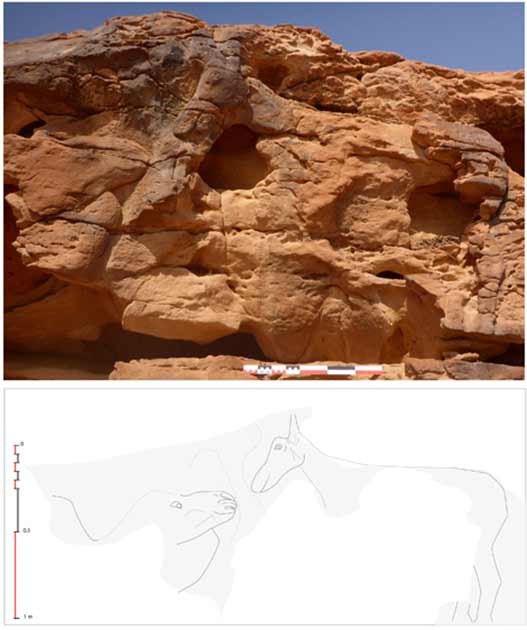 “They are absolutely stunning and, bearing in mind we see them now in a heavily eroded state with many panels fallen, the original site must’ve been absolutely mind blowing,” lead study author  Maria Guagnin , an archaeologist at the Max Planck Institute, told the  National. “There were life-sized camels and equids two or three layers on top of each other.”

Interestingly, some of the camels had bulging necks or bellies, indicating mating activity and pregnancy. Based on this discovery, the archaeologists believe the site may have been somehow tied to  fertility rituals .

“Communities of hunters and herders tend to be very dispersed and mobile, and it’s important for them to meet at regular times during the year, to exchange information, spouses and so on,” Guagnin  told Haaretz . “So, whatever the symbolism of the sculptures, this may have been a place to bring the whole community together.”

The reliefs showed evidence of frequent re-carving and re-shaping. This revealed the site had been revisited and reused over an extensive period of time after its initial creation.

“Neolithic communities repeatedly returned to the Camel Site,” Guagnin said, “meaning its symbolism and function was maintained over many generations.” 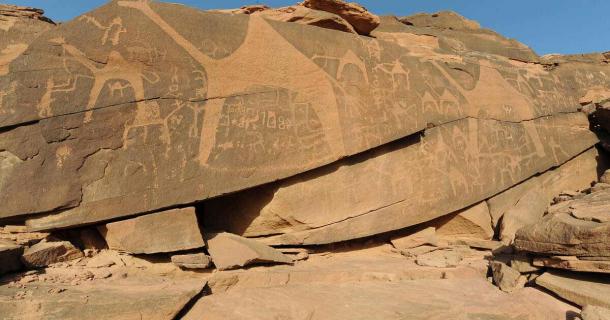 In the sixth millennium BC, the Saudi land now occupied by a harsh and inhospitable desert was  savannah grassland  that featured lakes, and abundant wildlife trees. Human settlers in the region herded cattle, goats, and sheep and supplemented their diets through hunting (wild camels were among the species they targeted).

These Neolithic era settlers were also deeply religious or metaphysical in their orientation, as their rock-carving practices reflect.

“We can now link the Camel Site to a period in prehistory when the pastoral populations of northern Arabia created rock art and built large stone structures called mustatils,” the study’s authors wrote in  an article  introducing their findings in the  Journal of Archaeological Science: Reports . “The Camel Site is therefore part of a wider pattern of activity where groups frequently came together to establish and mark symbolic places.”

The mustatils they mention were first discovered in the 1970s. More than 1,000 of these large-scale stone-work projects have found scattered throughout the northwestern Saudi desert, covering an incredible 77,000 square miles (2,000 square kilometers) of land space. They are estimated to have been constructed at least 7,000 years ago. 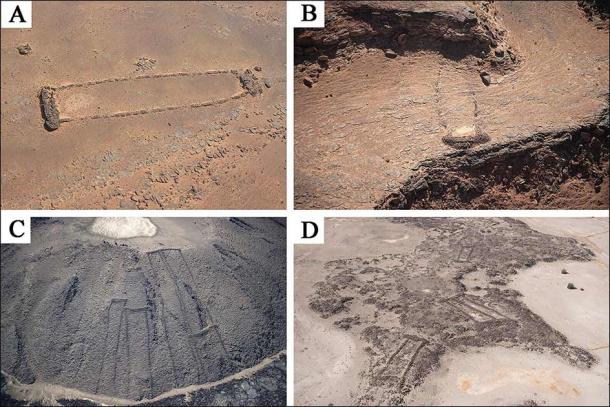 Arranged to form rectangles of various sizes, the mustatils are constructed from four-foot (1.5-meter)-tall sandstone blocks, placed to form expansive courtyards that range from 65 to 2,000 feet (20 to 610 meters) in length. Blocks were arranged inside the courtyards to create separate chambers with entrances, and arrangements of standing stones were also found inside many of the chambers.

In another study  discussed in the April 2021 edition of the journal  Antiquity, a different team of archaeologists took a closer look at these massive and enigmatic structures. These researchers are convinced they had metaphysical significance to the people who built them.

“We think people created these structures for ritual purposes in the Neolithic, which involved offering sacrifices of wild and domestic animals to an unknown deity/deities,” University of Western Australia archaeologist Hugh Thomas told  the Art Newspaper  in April. “Due to the monumental size of some of these buildings, this would have required considerable effort, so it is highly likely that larger communities or groups of people came together to build them. This suggests significant social organization and a common goal or belief.” 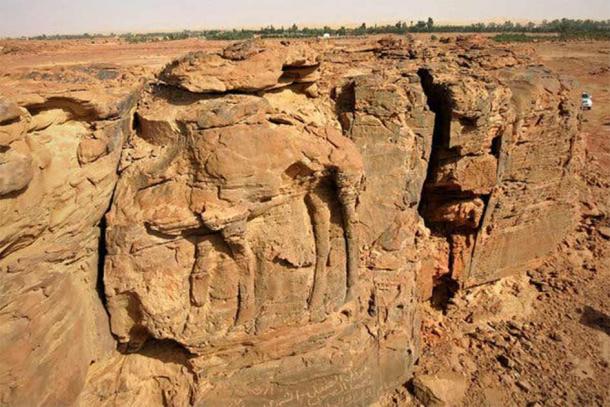 A Sacred Landscape Infused with Meaning

Did the same people who built the mustatils create the fantastic rock sculptures at the Camel Site?

There would seem to be an obvious connection between the megalithic structures and the carved camel reliefs. Various two-dimensional images of animals have been carved into the blocks used to make the mustatils. But they contain nothing as elaborate as the three-dimensional, life-sized camel sculptures that have been discovered in their immediate vicinity.

“Part of the difficulty in dating the site is that there are no parallels to it, so it was difficult to imagine what it was linked to,” Guagnin explained, noting the unique nature of the camel sculptures. Now that it is known these reliefs were created in the same general timeframe as the mustatils, it is easier to see the apparent connection.

Relating it to the religious practices of the mustatil culture, Guagnin stated that her belief that “the Camel Site is part of this wider tradition but has a special place within that [tradition] because it’s the only spot where we have it so concentrated and where we have high relief to the point that it looks like the animal is coming out of the rock.”

To the creators of the rock art and their people, the meaning and importance of the Camel Site reliefs and the large rock structures that decorate the surrounding landscape in every direction would have been clear. Since there are no written records to guide the interpretations of modern scholars, the significance of the sculptures and structures, which took an extraordinary amount of effort to create, will remain a matter of speculation.

Top image: Though difficult to see this rock has carved camel sculptures on it and they are between 7,000 and 8,000 years old based on the latest dating technology.                   Source: M. Guagnin & G. Charloux /  Journal of Archaeological Science: Reports