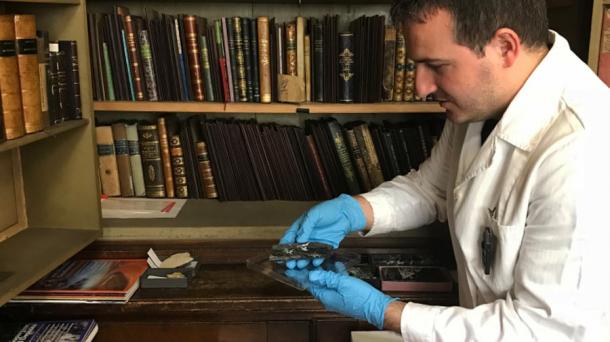 Gabon, the shortened name for the Gabonese Republic, is located on the west coast of Central Africa. It has a population of nearly 2.2 million people and has origins as a French territory in the 1800s. As a result, the primary language in Gabon is French. Gabon earned its independence as a country from France in 1960 along with several other African countries that had previously been part of the French Community.

Geologically, Gabon is interesting in that it is mostly made of nearly two-billion-year-old igneous and metamorphic rock from the Paleoproterozoic era. This ancient crust contains valuable natural resources including magnesium, iron, uranium, gold, and petroleum. Throughout the landscape, explorers and researchers alike can find ancient land formations such as the hydrocarbon-filled rift basins formed during the separation of Pangea 175 million years ago. The Gabon natural nuclear reactors are yet another ancient formation that was stumbled upon nearly 50 years ago.

During the 1970s miners came across these 16 nuclear reactors in Oklo, a southeastern region of Gabon, while searching for uranium to power French nuclear energy plants. Uranium is the primary element used to generate energy via nuclear fission. In manmade nuclear power plants, uranium is made into pellets to be used as fuel within nuclear reactors. These uranium pellets are then put in rods that are bundled together to form fuel assemblies. The fuel assemblies are housed inside the reactor vessel, which is submerged in water to act as a coolant. 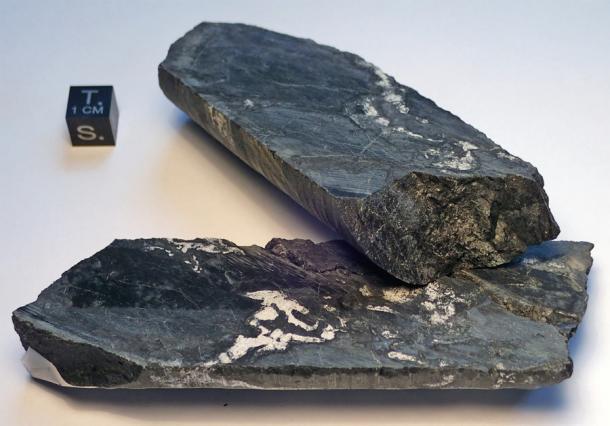 In nuclear fission, an initial uranium atom is split, which releases a neutron. This neutron then hits other uranium atoms, which in turn splits them as well. As more neurons split more uranium atoms, heat is generated from these chemical reactions, which is then used to turn water into steam. This steam then is used to spin steam turbines to produce environmentally-friendly renewable energy. The water the reactor vessel is submerged in acts to cool the elements and slow the neutrons so that the reactions do not take place too quickly.

Uranium is highly sought after by nuclear power plants because of its ability to easily split into smaller atoms compared to other elements. When the natural uranium was found by French miners in Oklo, researchers called to the area noticed that there was a lower concentration of 235U (uranium isotope 235, which is predominantly used in nuclear fission as it splits easily) that was statistically significant. They also discovered evidence of cesium, americium, curium, and plutonium, which are typically seen as waste products in nuclear reactors from uranium decay. This indicated to them that some natural nuclear fission had occurred within the mines. This was the first discovery made that indicated that nuclear fission could happen naturally within the earth. 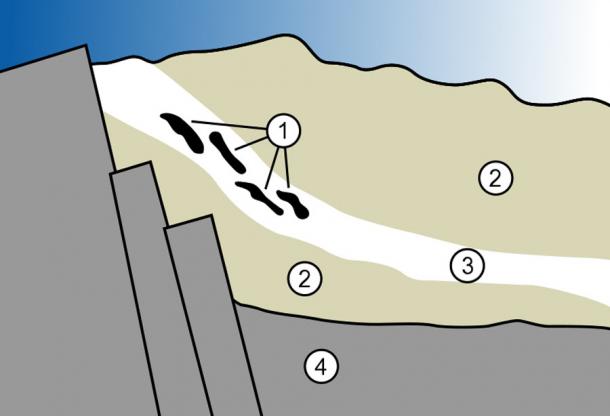 The Nuts and Bolts of Natural Nuclear Plants

As researchers began to look further into the nuclear fission occurring in the Gabon nuclear reactors, they began to wonder how nuclear fission was so casually taking place. In manmade nuclear reactors, coolants such as water are required to slow the chemical reactions by decreasing the speed of neutron movement. Decreasing neutron movement decreases the splitting of uranium atoms, which results in more manageable heat and steam production. Without a coolant such as water, nuclear fission would occur so quickly that the reactor vessel could become hot enough to melt, burn, or even explode.

A prime example of uncontrolled nuclear fission would be the Chernobyl disaster, which melted the core of the reactor and caused several explosions, leading to several casualties and severe radioactive contamination within the region. Several more deaths occurred in later years due to radioactive exposure, causing various cancers and diseases in affected individuals. 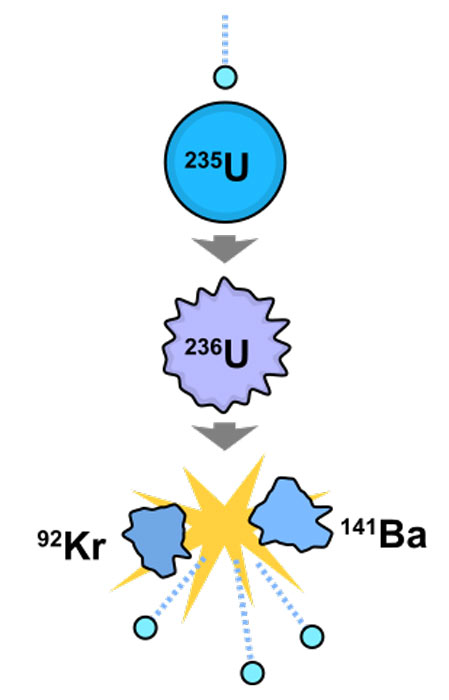 Simple diagram of nuclear fission. In the first frame, a neutron is about to be captured by the nucleus of a U-235 atom. In the second frame, the neutron has been absorbed and briefly turned the nucleus into a highly excited U-236 atom. In the third frame, the U-236 atom has fissioned, resulting in two fission fragments (Ba-141 and Kr-92) and three neutrons, all with very large amounts of kinetic energy. ( Public Domain )

When analyzing the Gabon nuclear reactors, scientists first realized that for natural nuclear fission to take place, a significantly higher concentration of 235U had to have been present at one point to start that chain reaction. Given the extremely high half-life of uranium (700 million years), this concentration would have been present nearly two billion years prior to the discovery of the uranium ores. With such a high concentration, atoms would have collided and split naturally, which would have led to further reactions. Researchers believe that this high concentration of uranium would have likely been caused by a combination of the weathering of igneous rocks and high bacterial activity in ancient times.

With such a high concentration of 235U, some type of coolant would have been necessary to control the reactions and prevent them from causing an explosion within the mine. It is believed that there was previously a significant amount of water in Oklo which would have acted as a natural coolant for the mines two billion years ago. This would have prevented any uncontrollable reactions from taking place within the mine over time.

To some scientists, the most fascinating part about the Gabon nuclear reactors isn’t the fact that they once produced nuclear energy. The most interesting fact is that testing did not show evidence of high radioactivity within the region. The once-toxic cesium and plutonium have now decayed into barium, which is harmless to humans. There is also no sign of radioactive exposure in wildlife in the area, which would have naturally been expected around 16 natural nuclear reactors. This discovery about the Gabon nuclear reactors suggests that nature has found a way to naturally rid the area of significant radioactivity over time, a lesson that scientists are quickly trying to learn from it. 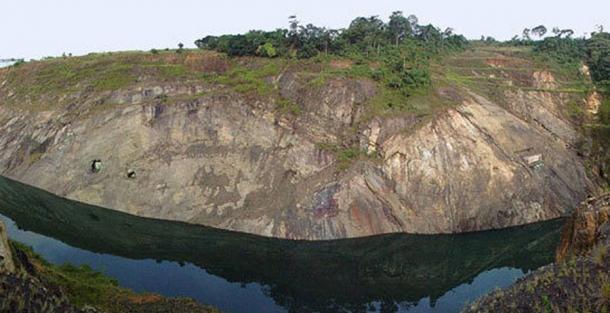 The terrain surrounding the natural nuclear reactors in Oklo suggests that groundwater insertion, above a layer of bedrock, may be a necessary ingredient for rich uranium ore capable of spontaneous fission. ( Curtin University )

A Series of Unfortunate Nuclear Events

Researchers believe that the Gabon nuclear reactors functioned for over a million years after they were formed nearly two billion years ago. The reactors would have functioned properly under water, until the water eventually evaporated due to the high heat from the nuclear reactions. This is the same reaction that takes place in manmade reactors, except the water is recycled instead of being evaporated out entirely.

After about a million years, the previously high concentration of 235U would have been significantly depleted. At this point, it is likely that the reactors stopped actively producing energy. Though the natural reactors had shut down, they were miraculously preserved for millions of years afterwards due to the protection of surrounding clay and carbonaceous substances. These substances protected the reactors from high oxygen sources which would have corroded or dissolved all traces of nuclear reaction over the last several million years.

Regarding the future of the Gabon natural nuclear reactors, French miners continued to extract the remaining uranium to use in manmade nuclear reactors. Nowadays, the mines are depleted of most of their usable uranium, which has eliminated any chance of the reactors producing more energy someday in the future. Scientists now call these mines ‘fossil’ natural nuclear fission reactors since they no longer function but still contain evidence proving their prior ability to generate energy. 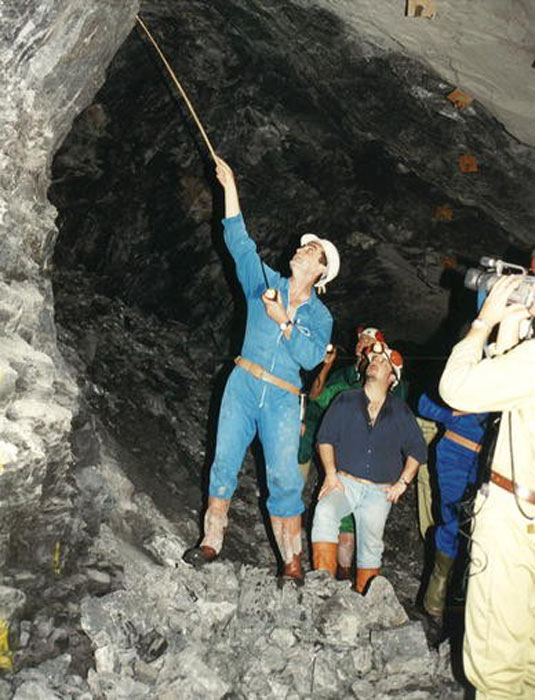 Professor Francois Gautier-Lafaye (University of Strasbourg) indicating the contact zone of natural nuclear reactor number 10 to a group of Swiss journalists at the Oklo uranium mine (Gabon) in 1997. (Dr. Matthias D. Knill/ Swiss Journal of Geosciences )

Can Natural Energy Make a Comeback?

For the fossil natural nuclear reactors in Oklo, mine reclamation is still ongoing. The plan for the region is not fully clear given its history as a natural nuclear reactor site, but scientists are actively working in the region to implement the best possible plan. These reclamation plans have led some to question whether the mines may someday begin to generate energy once more. Given the significantly low concentration of uranium in the mines currently, it is highly unlikely that any chain reactions will take place in the near future. Since uranium is a limited resource in the earth and cannot be made, it is also impossible for the concentration of uranium in the mines to increase over time.

The seawater would act as a natural coolant to prevent uncontrolled uranium splitting, similar to the Gabon reactors two billion years ago. Given that approximately 80% of the ocean is still unmapped and unexplored, it is certainly possible that a natural nuclear reactor could be lurking somewhere in the deep.

As renewable energy is researched and implemented further, uranium will continue to be mined for manmade nuclear reactors. Nuclear scientists are still analyzing the long-term effects of nuclear energy, such as the need to dispose of nuclear waste without polluting the earth with radioactivity. By using information gathered from the Gabon nuclear reactors, scientists may be able to develop an effective and safe method to dispose of this waste in the future. With any luck, the Gabon nuclear reactors will someday become an achievable example of how to generate nuclear energy in an environmentally-safe way.

Conservation, C. D. of. (n.d.). What is mine reclamation? CA Department of Conservation. Retrieved March 31, 2022, from https://www.conservation.ca.gov/dmr/SMARA%20Mines/reclamation

Schluter, T. (2005). Geological Atlas of Africa: With notes on stratigraphy, tectonics, economic geology, geohazards and geosites of each country . Springer-Verlag.