As crazy as it sounds, it’s now well attested that the letter “A” started out its evolution as the Egyptian hieroglyph for an ox. But its truly mind-blowing transformation came when turquoise miners in ancient Egypt adapted the hieroglyph, turning it into graffiti. This seemingly unimportant simplification actually spearheaded the creation of syllabic alphabets, such as the Latin alphabet, used all over the world today.

But who were these miners and why did they do this? The story starts in Egypt almost 4,000 years ago when the turquoise mines on the Sinai Peninsula gained importance on an industrial scale. Many people from different strata of Egypt’s Bronze Age society were involved in mining activities at this mountainous location now known as Serâbît el-Khâdim. In fact, there were many mining sites for different raw materials all over the Sinai Peninsula making it a quarrying hub.

From Egyptian Hieroglyphs to the Latin Alphabet

At that time, around 1900 BC, the Egyptian language was written using hieroglyphs. These were mostly logographic which meant each symbol represented a word rather than a sound. There were thousands of Egyptian hieroglyphs making learning, memorizing and writing them a specialist skill.

Similarly, the Bronze Age Mesopotamians wrote their  Sumerian language  using cuneiform pictographs on clay tablets. In both Egypt and Mesopotamia, the written language played a number of different roles from the cultic to the profane. Dedications to deities, pharaohs and kings were common, as were records of produce and land ownership.

However, in spite of the widespread use of these early  writing systems , they were still incredibly complicated. It was the invention of the alphabetic system that was to revolutionize the way people could read and write because it simplified the whole process of literacy. 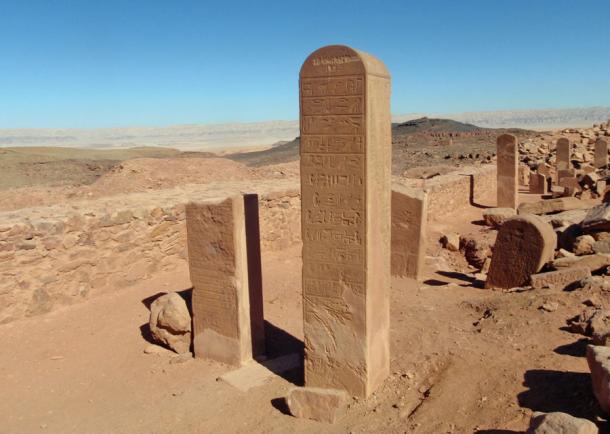 Graffiti That Revolutionized Literacy: The Temple of Hathor in Serâbît el-Khâdim

Close to the Serâbît el-Khâdim mines, located in the southwestern Sinai Peninsula of Egypt, a temple to Hathor was in use for 800 years and offered spiritual protection to those working in them. The temple went through several phases of reconstruction, taking a central role in the lives of those who spent time or passed through this desert location.

This large sanctuary consisted of a processional avenue, multiple buildings and rooms and many stelae engraved with hieroglyphic inscriptions. Priests, miners, officials, interpreters, scribes and others all left inscriptions at the temple dedicated to the  goddess Hathor  who was known as the “mistress of turquoise,” amongst her other epithets.

Serâbît el-Khâdim was first discovered in 1762. Over the next hundred years, various visits were made by antiquarians who were interested in the area, especially after Egyptian hieroglyphs were deciphered in 1822. It was during an expedition to the abandoned mines and the temple in 1905 that two Egyptologists realized they had made an exceptional discovery. The married couple William and Hilda Flinders Petrie noticed graffiti in and around the mines which appeared to be a different script to the Egyptian hieroglyphs etched all over the site.

During their visit they documented, mapped and photographed fourteen turquoise mines, circular enclosures near the temple and the temple itself. References to many different pharaohs were found which showed how long the area had been in use, as well as tools, altars, figurines, amulets, pottery, seals and jewelry.

The unusual graffiti symbols were on fallen stones in the vicinity of the mines, as well as on several statues within the temple grounds. This was in contrast to the more formal stelae decorated with finely carved  hieroglyphs leading up to the temple. There were very few etchings to work with compared to the many hieroglyphic inscriptions, but Petrie analyzed what there were and became convinced they had found the earliest evidence for an alphabetic system. 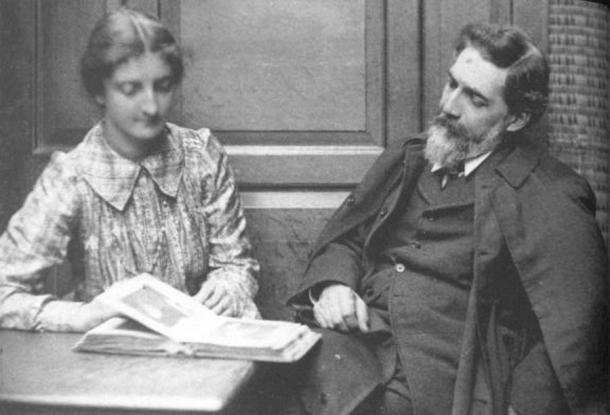 Ancient Graffiti as Earliest Evidence of an Alphabetic System

It took until 1916 for the graffiti to be translated by fellow Egyptologist Alan Gardiner. He noticed the repeated use of several characters that he thought spelled out the word  Baalat when considered phonetically. In Canaanite this meant “the mistress” which he took to be the equivalent to the Egyptian goddess Hathor.

This was the  Rosetta Stone  of the day, but it went further than translating a second language. It showed that the second language was expressed in an adaptation of Egyptian hieroglyphs and was being used syllabically. It soon became apparent that Petrie’s hunch had been correct. Here was a simplified version of  Egyptian hieroglyphs  where each character had been used to represent a sound rather than a word. It was the earliest known syllabic script and was celebrated as the potential forerunner to alphabetic systems in general.

Now known by experts as Proto-Sinaitic, it was to evolve and spread through trade and a significant input from the  Phoenicians. But who drew the graffiti and exactly when they did it is still debated. It’s most likely that these graffiti first appeared during the reign of Amenemhet III in the middle Bronze Age. The general consensus is that it was created by Asiatic people, most likely of Caananite origin hence the inscriptions featuring Baalat.

The stelae with hieroglyphic dedications by interpreters also suggest that people speaking different languages were making trips to the mines. At that time in Egypt, many Asiatic people lived in the eastern delta region and there are records of Egyptians discussing their mixed parentage. So it’s perfectly possible that these groups were part of the expeditions to the mines recorded as having taken place. 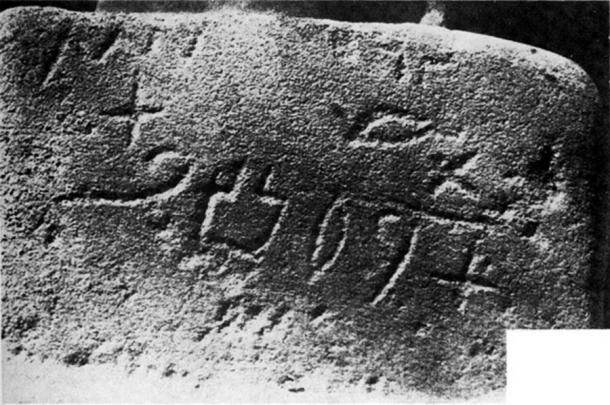 A Serabit inscription found by Flinders Petrie at Serâbît el-Khâdim which spell out the name of the goddess Baalat. ( Public domain )

Semi-Literate Origins of a Revolutionary Concept

Whether the people writing the graffiti were learned or not is another debatable point. It’s been argued that they were probably drawn by semi-literate people who were not well-versed in Egyptian hieroglyphs, and so used this abstract version to express themselves in their own language. The crude and inconsistent forms of these early letters and their location on random rocks, certainly lend weight to this theory.

But there are experts who think it’s just as likely these workers were skilled and educated. If it was barely literate mine workers who invented the alphabet for their own personal use, then it’s a remarkable accident of history because it completely changed the way language is written and read in many countries and cultures.

In 1993, similar inscriptions to those at Serâbît were discovered in the Wadi el-Hôl near  Luxor. The inscriptions consisted of two lines carved into limestone rocks in the valley. At first it was thought they might be older than those at Serâbît, but experts now think that they came later so it’s possible that miners from Serâbît, who were familiar with the script, travelled to Wadi el-Hôl.

The graffiti went through several transformations over a long period before forming the base of multiple  alphabets in use today. Experts aren’t clear on exactly when and how these symbols travelled outside of the Sinai Peninsula to take center stage in the future of literacy. But it’s certain it took many years. 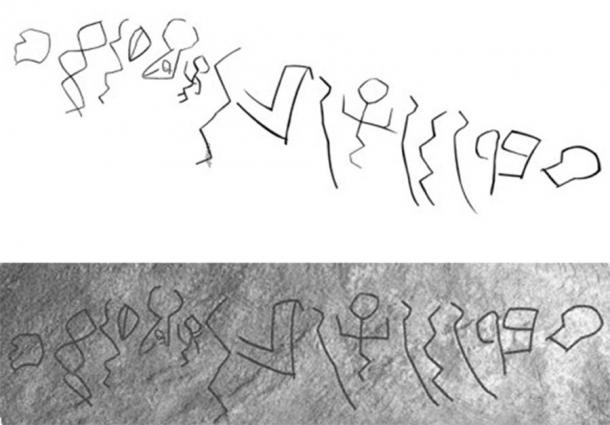 The Evolution of Egyptian Hieroglyphs into the Latin Alphabet

Interestingly, the early alphabets were abjads, which means they only had consonants. In Phoenician their version of the Egyptian hieroglyph for an ox represented a glottal stop, something that was of no benefit to the Greeks when they started to use the alphabet. Therefore, they changed the Phoenician letter known as “aleph” into the letter “alpha” and made it represent the vowel sound “a.”

Anyone who studies and analyses the past knows how important written language is. Texts and inscriptions give a lot of insight into the historic period that is unfortunately absent in the Neolithic and earlier. But, if it wasn’t for the introduction of the syllabic  alphabet, it’s possible even less textual evidence from the past few thousands years would exist.

Of course, other factors helped the proliferation of the written language. The manufacture of  paper, the improvement in  education and the invention of the printing press to name but a few. However, it’s clear that the syllabic alphabet made a significant contribution to the way information was recorded and passed on from the end of the Bronze Age onwards.

The origins and evolution of alphabetic systems and the Latin alphabet are complex subjects quite simplified here. But the point is that many useful inventions often start as happy accidents of history. Spoken languages also have long and convoluted stories which cannot be isolated from the multitude of factors that influenced their development.

Top image: Archaeologists have deciphered what could be the origins of the Latin alphabet in graffiti found at the Temple of Hathor near the Serâbît el-Khâdim mines. Serâbît el-Khâdim in the background and the evolution of the letter “A” in the foreground. Source: Einsamer Schütze /  CC BY-SA 3.0  & Till Nikolaus von Heiseler /  CC BY 4.0

Mumford, G. (2015). The Sinai Peninsula and its environs: Our changing perceptions of a pivotal land bridge between Egypt, the Levant, and Arabia.  ASAA Journal of Ancient Egyptian Interconnections, 7(1), pp. 1-24.