Was the recently sunk Russian flagship, The Moskova , carrying a fragment of the ‘true cross’ of Christ?

The Moskva was Russia’s Black Sea fleet flagship. The warcraft sank last Thursday after an onboard explosion. In 2020, Russian state media reported that the ship was due to take a holy relic onboard. Now, the question is being asked whether she sank with or without the piece of wood believed to have been a fragment from the cross of the crucified Christ.

A Lot of Wood For One Cross

It has to be said from the top of this article that if all the fragments of the true cross were gathered together from museums, cathedrals and churches one would have enough wood to build a replica of Noah’s ark. That said, great religious and cultural significance has been projected into the tiny piece of wood that is believed to have sunk on Thursday onboard the doomed Russian warship.

The Moskva was a Russian missile cruiser. She was heralded as the flagship of Russia’s Black Sea fleet. Nevertheless, Russian state media reported that it sank on Thursday following an explosion onboard. The association with the holy relic comes after the Russian Orthodox Church announced back in February 2020 that the relic had been delivered to the then-commander of the Black Sea fleet, Vice Admiral Igor Osipov. The state-run Tass news agency reported at the time that the piece of ‘true cross’ was being stored at the fleet’s headquarters before the planned delivery to the ship.

Questioning The Fate of The True Cross Fragment

The fragment of wood believed to have originated from the crucifixion cross of Jesus Christ measures only around 5 millimetres long. Tass reported that it was embedded in a 19th-century metal cross kept in a reliquary in Russia. Across the globe many churches and cathedrals claim to possess tiny pieces of wood believed to be fragments from the True Cross, but this ranks as one of the smallest.

Roman Catholic and Orthodox followers generally never doubt the authenticity of these magical, or miraculous, pieces of wood, and regard them ‘all’ as genuine pieces of the cross of Christ. On the other hand, Protestants most often dispute the claimed holy relics believing the whole concept is nothing more than idolatry. 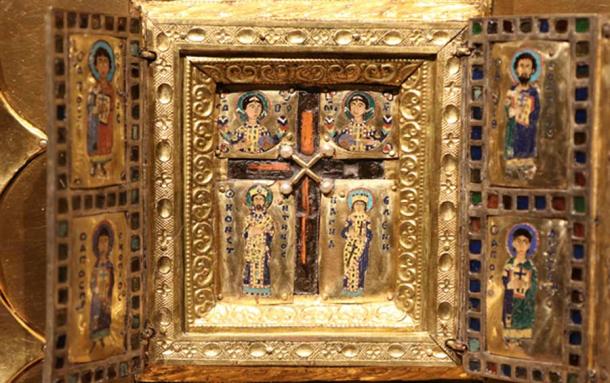 All of the claimed holy fragments have their origins in the writings of Historian Socrates of Constantinople who said Empress Helena travelled to the Holy Land in 326–328 AD, where she discovered the hiding place of three crosses. While two were associated with the crucifixion of the two thieves, St. Dismas and Gestas, the third bore the name of Jesus.

According to Fox 5 News the Moskva had the capacity to carry 16 long-range cruise missiles which could have had devastating effects on Ukrainian cities. Reports say the warship’s sinking ‘reduces Russia’s firepower in the Black Sea.’ It is not yet determined whether or not Ukrainian forces sank the Moskva , but if they did it represents the largest warship to be sunk in combat since the Falklands War, according to Fox. So why then was a sacred relic transferred onto a Russian warship?

The Moskva battleship had a small chapel onboard, said Sergiy Khalyuta, archpriest of the Russian Orthodox Church’s Sevastopol District. He told Tass that the holy relic was transferred at the request of its owner, who is an anonymous collector. Business Insider investigated the transference of the cross but they were unable to determine if it was onboard the Moskva at the time the vessel sank.