Archaeologists in England have excavated a rare 4,000-year-old Bronze Age coffin made from a single oak log and complete with a rare warrior’s axe. Unlike all other early Bronze Age warrior burials discovered in Britain, with ceremonial axes, this one was found at the bottom of a golf club pond!

The “extremely rare” hollowed-out log coffin was discovered during works in July 2019 at the Tetney Golf Club in the county of Lincolnshire, in the East Midlands of England. The coffin, which was found during maintenance work on the pond at the golf course, was determined to be that of a “high-status” Bronze Age warrior.

This conclusion was reached based on the man’s well-preserved ceremonial axe which was found with the coffin. Once the team of restorers have saved the coffin, the axe and the remains of the warrior from deteriorating now it is exposed to air,  the entire discovery will be displayed at The Collection in Lincoln. York Archaeological Trust have just issued a  statement regarding the find which was made by chance in 2019. 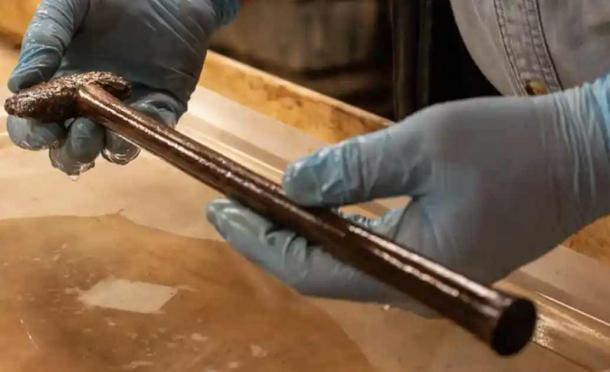 The ceremonial warrior’s axe found with the Bronze Age coffin in a pond at the Tetney Golf Club. This image shows the axe in the condition it was found before it was cleaned. (Charlotte Graham /  York Archaeological Trust )

Tetney’s Bronze Age Coffin Is One of Only 65 Found So Far!

The Guardian  explains that archaeologists in England have only ever found “65” early  Bronze Age coffins . And to amplify the rarity of the find, only 12 similar ceremonial axes have ever been unearthed in Britain. In every one of the 65 coffin burials so far the deceased within was from the noble, or elite classes, and the inclusion of the  ceremonial axe  indicates that the Tetney man was also of high status.

You would think news of an ancient burial such as this would excite specialists the entire way up the archaeological chain. But this is not always the case. Often these discoveries strike terror into the hearts of preservation specialists who know that from the second a finder, or archaeologist in control of a dig, removes a find from its traditional home, air and light begin to destroy the artifacts. A report in the  Daily Mail  says that a team of  expert restorers  “raced to preserve the delicate finds.” 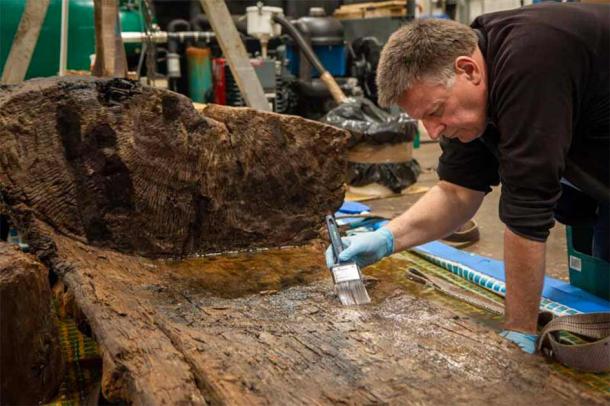 The Coffin was Packed with Yew Leaves or Juniper Branches

As soon as the accidental discovery was made in July 2019 during works at the Tetney Golf Club “a rescue mission” was launched to protect the delicate finds, according to the  press release . Historic England immediately issued a £70,000 grant to fund a team of experts to save the 4,000-year-old coffin and axe.

The so called “Tetney coffin” was saved along with part of its lid. The Bronze Age coffin was fashioned from a spilt  oak tree  trunk that was 10 feet (3 meters) long, and 3.3 feet (1 meter) wide.

Hugh Willmott of the University of Sheffield noted that his team of excavators discovered “organic material preserved in the damp and airless conditions within the hollowed-out tree trunk.” The coffin had been packed with  yew leaves or  juniper branches. It is thought this would have cushioned the deceased’s body.

The coffin’s “excellent state of preservation” is thought to be attributable to a deep layer of silt deposited on top of the coffin which encased it and protected the wood from the wearing effects of wind, air, rain, and the sun. 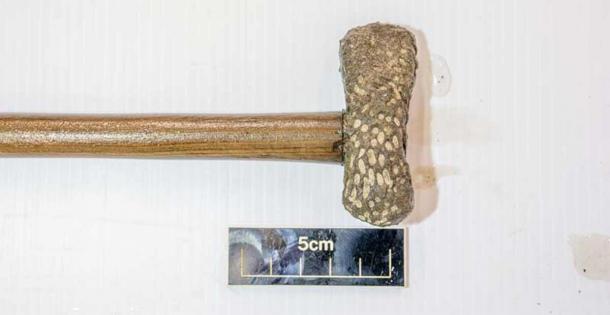 A Costly And Time-consuming Ancient Discovery

Hugh Willmott said the ancient man’s ceremonial battle-axe determined that he was an authority figure in the early Bronze Age. He added, that just like us, the man lived during a time of  rapidly changing environmental conditions . The archaeologist explained that “rising sea levels and coastal flooding” ultimately caused the man’s grave and burial mound to be covered in a deep layer of silt that greatly aided in its preservation. Since the discovery in July 2019 the UK Secretary of State has made the ancient burial site at the Tetney Golf Club a  Scheduled Monument .

“The prehistoric log burial from Tetney is a significant discovery and we are very pleased to be part of the Historic England funded project team, contributing to the research and carrying out the conservation of the coffin and axe. Our expertise in the conservation of waterlogged finds will be put to good use, ensuring that this remarkable discovery is preserved and appreciated by a wide audience. We hope to preserve the axe within 12 months but the coffin, due to its size, will take at least two years to fully treat.”

Panter said it is expected to take about 12 months to restore the axe and most of the associated finds. However, since the coffin is so big it will take at least two years for its complete restoration. Once everything is encased in advanced resins and UV resistant coatings they will be exhibited to the public at the Lincoln Collection Museum.