Illuminated manuscripts are manuscripts that are covered with painted ornaments presented under several forms. These documents are perhaps most commonly associated with the European Middle Ages. Nevertheless, the concept of, and the techniques used for, the production of the illuminations were introduced at a much earlier period of time. In addition, there are a few surviving manuscripts from the Late Antique period which have illuminations in them. There are also examples of illuminated manuscripts with odd additions such as jousting animals, penis trees, and bizarre creatures added to the margins.

Painted ornaments found in the illuminated manuscripts were first introduced as miniatures in Rome as early as the 1st century BC. For example, portraits were sometimes painted onto texts. Although historians of the past have written of their existence, there are no available examples of such manuscripts from this period of history known today.

Thus, the earliest surviving samples of illuminated manuscripts are from the 4th and 5th centuries AD. Some examples include: The Vatican’s ‘Virgil’, which has 50 miniatures, the Bible of Quedlinburg, which contains the most ancient Christian miniatures known today, as well as some papyri from Egypt. 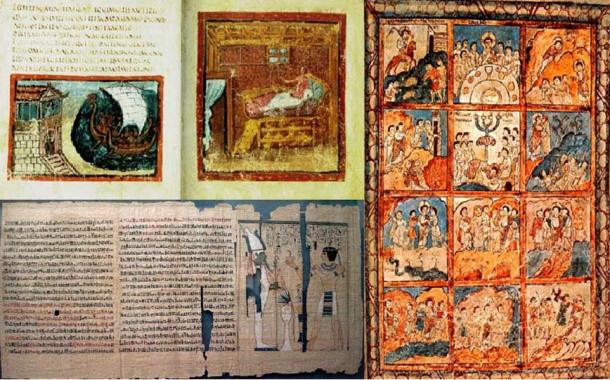 Some scholars believe that the origins of this art can be traced back to Egypt. Portraits, which are often in profile, are found to have been painted in the midst of a manuscript’s text according to the ‘Egyptian method.’ Using this method, artists would have first drawn the outline of the desired image in black. After that, the image would be filled with colors.

This technique, and the concept of miniatures, can be seen in the Medieval illuminated manuscripts as well. Nevertheless, it was during the Middle Ages that the method became more lavish and the types of images diversified.

The Expansion of Illuminated Manuscripts in the Middle Ages

During the Middle Ages, miniatures were still used to decorate manuscripts. In addition to this form of ornamentation, the artists of this period added other decorations – such as larger pictures which occupied an entire page, historical initials (initial alphabet letters that contained scenes), as well as decorated borders.

As for the creation of these decorations, a Medieval artist would first make an outline of the drawing with ink (a procedure that was also used in the ‘Egyptian method’). Next, a sticky substance was used to paint the areas where gold leaves were to be placed. The gold leaves were then laid down on this substance, and burnished or rubbed. By doing so, a shiny surface, which sparkled as the pages were turned, would have been created. Finally, paints were applied to the rest of the image. 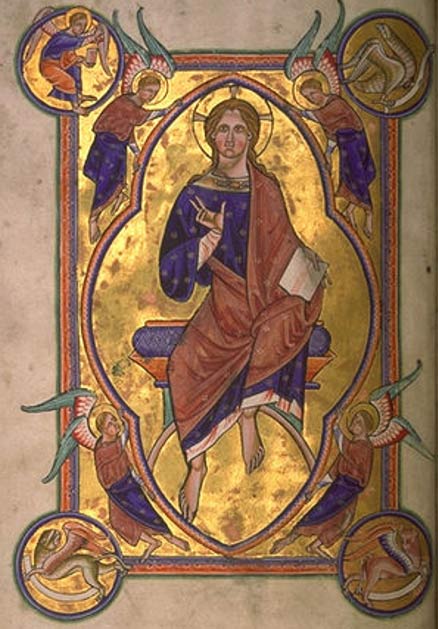 Whilst the techniques remained the same, it was the subject matter, the richness, and the people who produced the illuminations that changed over the centuries. For instance, between the 6th- 8th centuries AD, illuminated manuscripts in Western Europe were solely made by Irish monks. These works are characterized by their fusion of religious themes with Celtic culture and design. These documents, which were religious writings, were often intricately decorated with spirals, rose-work, rhombuses, and miniatures. 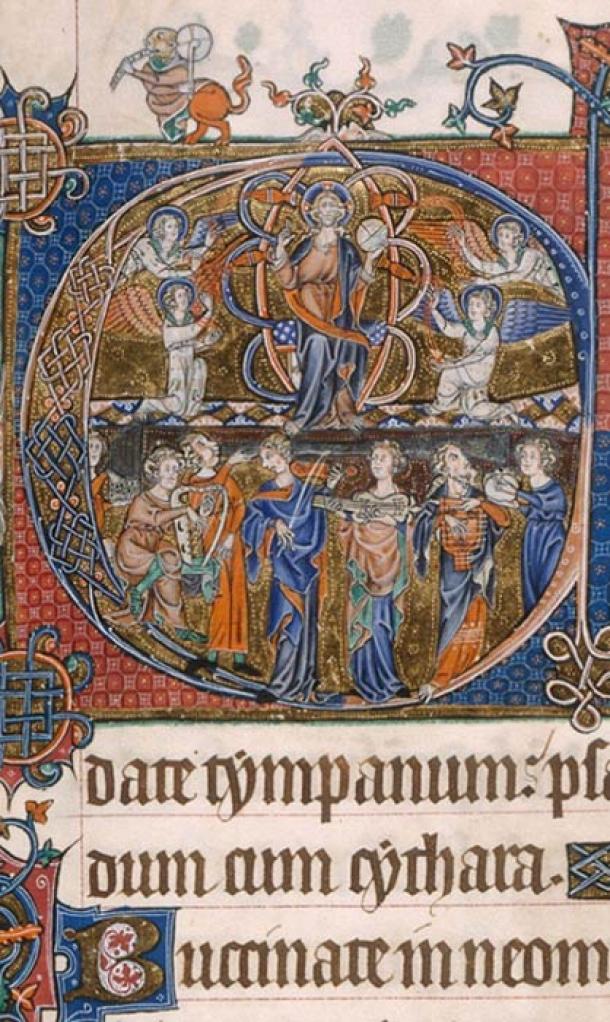 Image from the Gorleston Psalter, with Medieval musicians on the bottom, Christ above. ( Public Domain )

Of course illuminated manuscripts were produced by other Europeans as well. In addition, during the 13th century AD, the production of these works of art were no longer dominated by monasteries, but were also produced by laypeople.

Religious themes remained the focus, though like the work of the Irish monks, other subjects were fused into them. For instance, in the English work known as ‘Queen Mary’s Psalter,’ there are over 200 scenes from the Old Testament which are bordered with a simple framework of foliage. These images are followed by scenes from the life of Christ, which are set against a background of gold.

Sharing the stage with these Biblical scenes are illustrations that are perhaps somewhat less Biblical – the chase, tourneys, games, and even grotesque subjects. 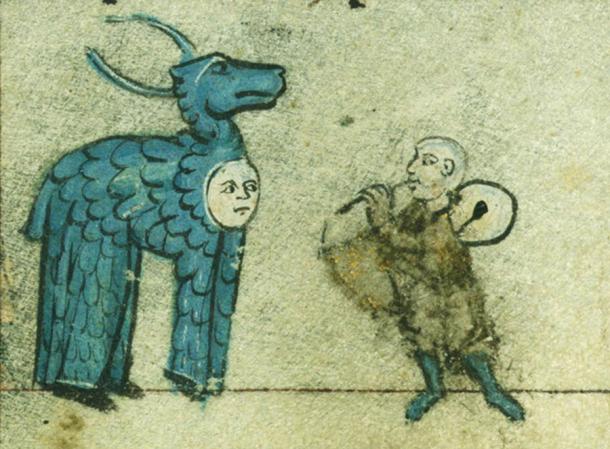 Strange Additions in the Margins

There are also numerous images often found in the margins of illuminated manuscripts that may seem rather bizarre to modern viewers. These are called marginalia and have been likened to “doodling” on the edge of a page. 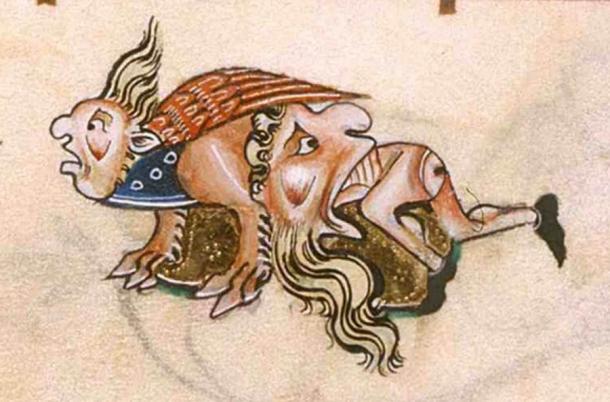 Marginalia comes in a variety of forms. While some of these manuscript decorations may be considered to be intricate works of art, others stand out thanks to their bizarre nature. Drolleries fall into the latter category and include a variety of subjects.

One of these is the depiction of anthropomorphized animals or animals doing human activities. This is seen, for example, in the drawings of rabbits engaged in acts of violence – decapitating human prisoners, jousting, and hunting other animals. Considering that the rabbit is one of the most timid of animals, it is impossible to imagine them engaged in such acts. Thus, such drolleries were clearly meant to humor observers. 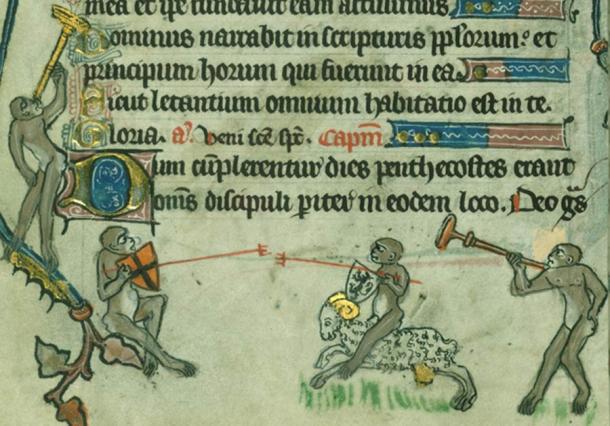 Psalter-Hours with apes jousting in the margin. ( Public Domain )

Sexuality was another theme that the Medieval illustrators seemed to have relished dealing with. Such obscene or erotic art was not limited to secular literature but also found in sacred texts. In the Rutland Psalter, for instance, there is the image of a naked man flaunting his behind, while a simian figure, armed with a lance and shield and riding an ostrich or goose, charges at him. In another, the Ormesby Psalter, a man is shown blowing a trumpet into the anus of a horse-headed boy. Phalluses are also often depicted. In one manuscript, a naked woman is shown riding on a flying phallus creature, while in another, a medical treatise of John Arderne, a disembodied penis is depicted in a basket.

Finally, some manuscripts contain scribbles by the copying scribe, as well as complaints about their job. These include “Thank God, it will soon be dark.” “New parchment, bad ink; I say nothing more.” And “Now I’ve written the whole thing: for Christ’s sake give me a drink”. 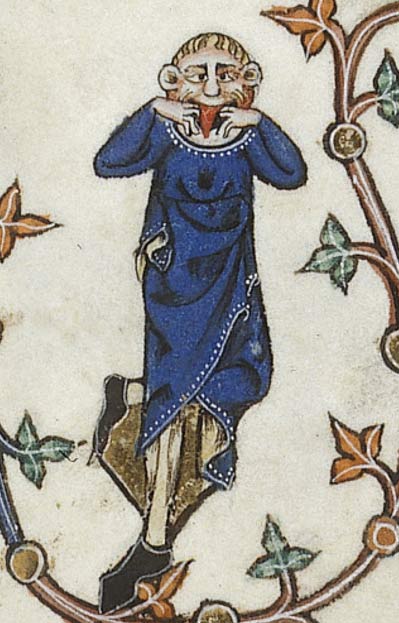 Another example of a bizarre character visible in the marginalia of the Gorleston Psalter (14th Century). ( Public Domain )

Top Image: Marginalia of a person hanging off of a vine in a Medieval illuminated manuscript called the Gorleston Psalter . Source: Public Domain

Newitz, A., 2012. Medieval monks complained about their jobs in the margins of ancient manuscripts. [Online]
Available at: http://io9.gizmodo.com/5896008/medieval-monks-complained-about-their-jobs-in-the-margins-of-ancient-manuscripts