Archaeologists working with Aboriginal artists in Australia have interpreted rock shelter art with extraordinary findings. This artistic blend of astronomy, mythology and the Dreamtime is like no other on Earth.

Located near the rural town of Barcaldine, in the Barcaldine Region in Queensland, Australia, the Marra Wonga rock art shelter represents one of Central Queensland’s largest ancient rock art sites. This 160 meter long sandstone rock art site is strewn with around 15,000 examples of both prehistoric and modern Aboriginal rock art, known as petroglyphs. 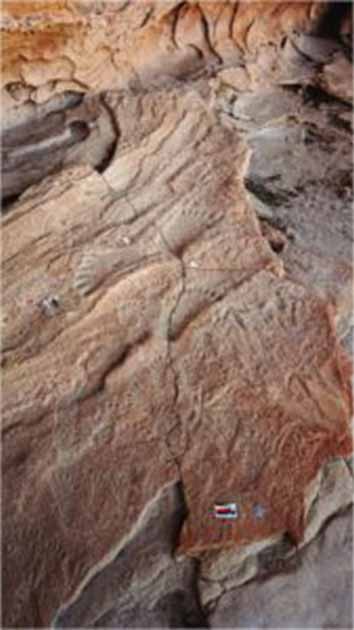 In 2020, Professor Paul Tacon and Dr Andrea Jalandoni from the Griffith Centre for Social and Cultural Research and Australian Research Centre for Human Evolution started working with the Yambangku Aboriginal Cultural Heritage and Tourism Development Aboriginal Corporation (YACHATDAC). They have now published a series of new interpretations in the journal Australian Archaeology .

Seven large star designs with central engraved pits are threaded together by several snakes, the lengths of which extend through other petroglyphs. The study says this particular group of images not only illustrate ethnographic perspectives but that these sit alongside archaeological interpretations. And while the site appears to be a chaotic mess of artistic expression, order was discovered by the team of scientists, and they say a “narrative runs through the whole site”. 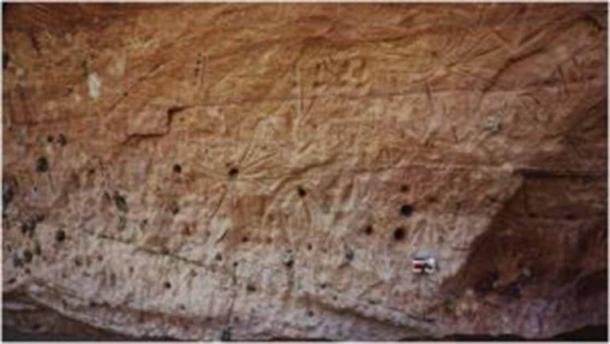 Professor Tacon says ten clusters of designs spread across the length of the engraved area of Marra Wonga that “appear to have been placed in a particular order, from south to north”. This design format made perfect sense to contemporary Aboriginal community members who read the panel as a story from the Dreamtime.

All over the world, mythology encapsulates aspects of cosmology and astronomy. According to the Dictionary of Symbols by J. C. Cirlot there were “seven faerie types, one for each direction of space and time”. Most ancient agrarian cultures corresponded the number seven with gods because seven heavenly bodies were observed in the sky with the naked eye; the Sun, Moon, Venus, Mercury, Saturn, Mars, Jupiter.

Myths featuring seven sisters were often inspired by the Pleiades constellation. These stars became symbolic of the faerie realms of both Scotland and Ireland where they were associated with the magic “septagram,” the seven-pointed Faerie Star. Returning to Marra Wonga in Australia, the panel featuring seven star-like designs clustered in three rows also represent the Pleiades. 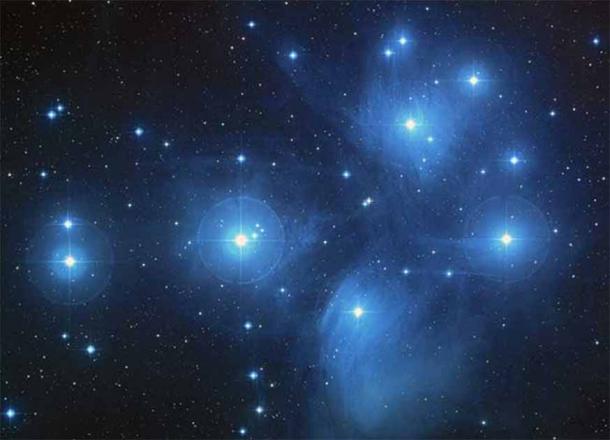 The Pleiades, an open cluster consisting of approximately 3,000 stars at a distance of 400 light-years (120 parsecs) from Earth in the constellation of Taurus. It is also known as “The Seven Sisters”, or the astronomical designations NGC 1432/35 and M45. (  Public Domain  )

The Seven Stars Of Dreamtime Creation

In world mythology the seven sisters were often chased by love struck male hunters and wisemen, who were associated with constellation Orion. Many seven sisters myths are often loaded with sexually charged themes, but the new interpretation at Marra Wonga is different from all others.

Professor Tacon concluded that while many of the seven sisters’ stories “have an unpleasant or violent side”, not so is the case at Marra Wonga. He said this particular depiction of the sisters and their pursuer in an “ancient era of the Dreamtime depiction of the creation of landscape”.

This new paper essentially demonstrates how ancient artists in Australia rationalized what they saw in the sky with abstract designs. And, so far as “why” create all these images is concerned, how else would elders pass onto their young the astronomical information which helped them get to hunting grounds at the right times, how to survive there, and how to get home again safely?

Top image: The central portion of the Australian rock shelter art at Marra Wonga, Queensland,  with an extensive wall of petroglyphs and stencils.            Source: A. Jalandoni / Griffith University