Every place has its own legends – some being truer than others. Around the globe, you can find many legends about small human-like creatures causing chaos wherever they go. Some of these creatures are called goblins or golems, while others may be elves or even poltergeists. Mexico is no exception to these types of legends. In Mexico specifically, lives a Maya legend about “ little people ” that has been passed down for centuries. This legend is of the Alux, a kind of spiritual little person that causes mayhem, mischief, and destruction wherever it goes.

The Alux: Master of Mischief

Aluxes are believed to live somewhere around the Yucatan peninsula. They are typically invisible to humans, although legend has it they are capable of becoming visible when they want to be mischievous or are feeling playful. They are typically found in natural areas including jungles, forests, fields, caves, and even deep stones. However, they are able to make a home anywhere they wish, as long as they have food, water, and shelter.

When visible, Aluxes (or Aluxob, in the Mayan language) are only knee-high and have wide, owl-like eyes. They are also quick in their movements, and some have even been said to have the body parts of other animals including iguanas, deer, macaws, or coati. Other physical descriptions are similar to those of sprites, spiritual fairy-like creatures. In some regions, Yucatan locals say Aluxes can appear in more frightening forms, including dark shadows or shapes with glowing red eyes. 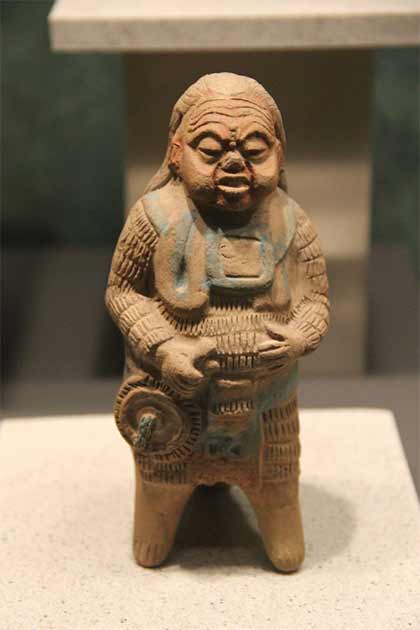 Possible depiction of an Alux displayed at the National Museum of Anthropology in Mexico City. (Gary Todd / CC0 1.0 )

Demands are the Favorite Pastime of the Alux

As previously mentioned, Aluxes are rumored to live around the Yucatan peninsula. According to locals, they supposedly reside in the jungles, but will leave the jungle and move towards civilization if they feel they will benefit from it. This is especially true if a community provides them with offerings, in which case they will go to that area to take advantage of these resources. However, they will only stay as long as the offerings continue.

Aluxes are easily pleased, but they are also easily angered. If Aluxes are disrespected or disregarded, they may take on menacing forms to frighten the locals. In addition, they may destroy items in the region or pull frustrating jungle pranks. If a local has a string of significant bad luck , it is believed they must have done something to displease an Alux. Often these people who have disrespected an Alux must somehow make it up to the Alux by providing new offerings or even building them a home.

If a Maya is traveling across the jungle, an Alux may stop him or her to ask for an offering. If the traveler refuses, the Alux will gather other Aluxes to cause mayhem on the rest of the traveler’s journey. According to locals, the Aluxes cannot cause physical harm such as scratching, biting, or kicking, but they can bring about a spell of illness in the form of a curse. Locals and visitors alike should also avoid calling the Alux by name, since speaking the name of an Alux may summon it to you, an event that no Alux is a fan of. They will likely cause a bout of immediate mayhem as revenge.

Aluxes and Farmers: Friends or Foes?

Though the Alux may sound scary, they aren’t perceived as much of a villain as they are small, chaotic and childish. Like a child, the Alux will bring peace with treats, but throw tantrums if annoyed. In fact, Aluxes aren’t only known for their chaos – they are actually a source of luck for many Maya farmers and communities. Many farmers have proudly turned to the Aluxes for decades for help in keeping their farms safe. This is due to their believed origins as a gift from the Lord of the Corn, sent to bless the fields of maize throughout Mexico.

Local legends claim that Aluxes will stay on your land or in your community if you build them a small home to live in. They are believed to help in growing crops, guarding your land, and even calling upon rain during dry seasons. To attract the Alux in the first place, farmers may go to an X’men (shaman) who uses mud and some of the farmer’s blood to create a small Alux figure that is bonded to the farmer. After seven weeks of creation, the Alux’s spirit is then “brought to life” by the shaman’s prayers and offerings. The Alux will then be placed in its new home to assume his position as the guardian of the land. However, the Alux will only proudly assume their role as protector if they find the farmer to be of sound integrity.

Farmers purchasing a rancho (farm) that is already protected by an Alux will find themselves as the butt of several Alux pranks. The Alux will also allow misfortune to come to the farm, including invaders, thieves, and dry spells. They will refuse to accept the new owner until the new owner provides offerings such as prayers and food to the Alux, acknowledging and honoring them as the original protector of the land. If the Alux is ignored or mistreated by the farmer at any point, they may return to their chaos-causing ways.

Many of these tiny Alux homes can be found throughout the Yucatan peninsula in small villages and communities. Many farmers still abide by these legends to bring good luck to their farms. However, the rules don’t stop there. The Alux will only assist the farmer for approximately seven years before he becomes bored with his work. After seven years, it is recommended that the farmer permanently bar the door of the tiny Alux home to trap him inside. If the door is not sealed, the Alux will begin causing mischief on the farm and even bring misfortune to it, a stark difference from the help provided during the previous seven years. 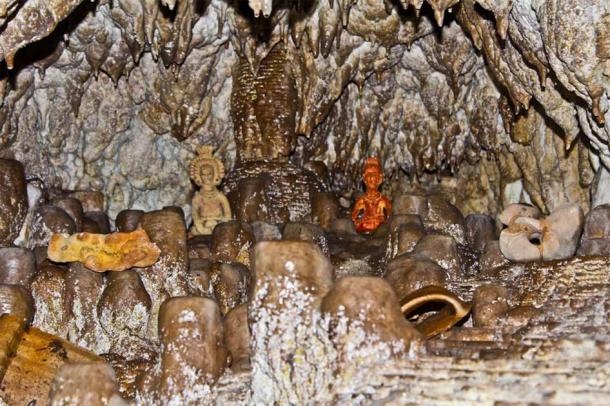 The Mythical Background Behind the Legend

Though some modern Maya still believe in the spirits of the Aluxes, others appreciate them only as a myth. However, all myths and legends had to come from somewhere – so where did the concept of the Alux come from?

Historians claim that the term “Alux” is sometimes mistaken for the Spanish word duende and vice versa. “Duende” is a Spanish term referring to a supernatural human-like creature similar to gnomes, leprechauns, or goblins. There is also a focus on these small human-like creatures having specific homes or places of dwelling. Given their similarity, it is obvious how these two could get mixed up at times.

The concept of the duende is found in the folklore of many countries beyond Spain, including Greece, Portugal, Belize, and the Philippines. Though these duendes may go by slightly different names in different locations, they all have similar characteristics including their small size, natural habitats, and penchants to cause mayhem in random ways.

Ways these other duendes can cause trouble include burning food, consuming the food of others, causing heavy rain or snow, waking people at night, and tempting little girls and boys to be mischievous with them. However, like the Alux, they can also bring luck and perform good deeds including rebuilding destroyed buildings, helping lost travelers through the forest, blessing land, and rowing the boats of old fishermen at sea.

The fact that the word duende is sometimes used interchangeably with Alux suggests to historians that the legend of the Alux may have stemmed from Maya interactions with the Spanish during the 1500s. In addition, the Maya would have had contact around this time with pirates from the British Isles, who held various beliefs about faeries, similarly legendary creatures. To some Maya, however, the legends of the Alux preceded the myths about duende and even faeries, as the Aluxes were once believed to be the spirits of Maya ancestors or even spirits of the land itself.

This ancient origin of the Alux is also suggested by some pre-Columbian Maya artworks . Some pieces of art from that era depict mythical creatures and traditions that could be related to the legendary Alux. However, none of these pieces of art are labeled or confirmed to be depictions of these creatures, and they could be related to other mythical or religious concepts. Since there are many religious concepts from ancient Aztec culture , the intent of these pieces is not fully clear. Further evidence would need to be found to confirm the official purpose behind these ancient art pieces.

Some cryptozoologists believe that the legend of the Alux could have stemmed from reports of real-life little Maya people in early centuries. Dwarfism would have been a somewhat uncommon medical condition in the early past. Early Maya who had witnessed dwarfism may have communicated these accounts by verbal and written word, which could have eventually evolved into the legend of the Alux. This is further supported by accounts that true Aluxes are between two to three feet (0.6 to 0.9 m) in height. Though the figures made are only a few inches tall, true Alux reports are much larger and similar to average dwarfism height. 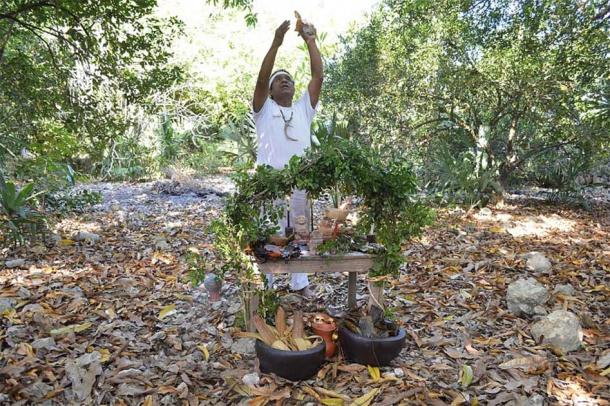 Maya priest or shaman conducting a ritual with an Alux to bless the harvest. (Alejandro Isael Jimenez Soberanis / CC BY-SA 4.0 )

As previously mentioned, some modern Maya still believe in the spirit of the Alux. Farmers, in particular, will still engage in some of the ritualistic behaviors regarding inviting Aluxes to heal and protect their land for seven years. Like other superstitious behaviors, these farmers may not necessarily believe in the Alux as a true spirit, but will participate in the rituals for the sake of potentially bringing some luck to their farms.

Other communities beyond farmers have also continued the Alux tradition. The most well-known of these stories occurred in the 1990s regarding a bridge built between Cancun and Playa del Carmen called the Cancun-Nizuc bridge. According to the situation, construction on the site had failed three separate times until local Maya approached the workers to tell them they had begun building without the Aluxes’ permission.

Only by building the Aluxes a shelter would they stop hindering construction. Reports say that the construction workers reached out to a Maya shaman after receiving advice from local farmers to get help in building an Alux house. Though it may have been a coincidence, construction did not fail a fourth time after they respected the local traditions.

Many restaurants, hotels, and even shops still contain Alux houses to appease the legendary creatures. As some are sealed off after seven years, more are built to appease future Alux guardians. Though the Aluxes may just be a myth to some, it is clear that they still have a stronghold over Maya culture – one that doesn’t seem to be letting go anytime soon.