Turkey’s Çatalhöyük settlement, which developed between 7,500 BC and 6,400 BC, is often referred to as the world’s first, and oldest, metropolitan city, and for good reason. The two most revealing recent finds are an 8,500 year-old Çatalhöyük ladder, and a furnace oven. The implications of the Çatalhöyük ladder, used to enter homes from the roof, and the oven below the ladder, are enriching our understandings of ancient life in this Neolithic and Chalcolithic settlement in southern Anatolia. 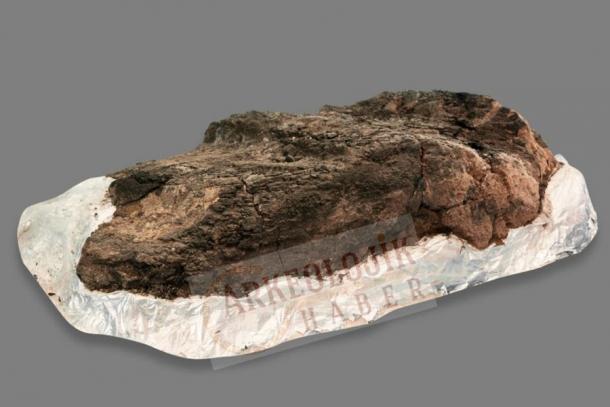 A fragment of the 8,500-year-old Çatalhöyük ladder recently found in the remains of a Neolithic home at the site along with a furnace oven . ( Çatalhöyük Excavation Archive )

Excavations at the site are being conducted under the Çatalhöyük Research Project , and directed by Associate Professor Ali Umut Türkcan from Turkey’s Anadolu University, reports Arkeonews . Mr. Türkcan was quoted as saying:

“A large number of in situ Ezgi stones, obsidian tools, bone tools, and animal mandibles were placed around the furnace, and it is a tradition in Çatalhöyük to find such votive bones in burned and abandoned areas. As we were walking towards its base, we first came across a large wooden find. It was difficult at first to identify this processed relic, which turned out to be about 75 cm long [2.4 feet] and 30 cm [1 foot] wide.”

“At first, I thought it might have been one of the large oval wooden boats excavated by James Mellaart in the 1960s, but then it turned out to be the rungs of a ladder, with two equally spaced rows of broad lateral notches on it, two clear and a third with slight marks.”

The significance of this find cannot be understated. Çatalhöyük homes, in an apparent show of egalitarian equality, were arranged back-to-back, without doors and windows. Archaeologists have long posited that entry to and exit from these residences was through a roof opening, which was accessed with a wooden ladder. However, until now, no ladder had been found to corroborate this theory. Its proximity to the furnace, along with the presence of diagonal traces of clean gypsum plaster on the wall indicated clearly that this large wooden mass with steps was a Çatalhöyük ladder.

Mr. Türkcan added, “In the southwestern part of the building, called Space 66, adjacent to the west wall of the building, we found the remains of an oven, the superstructure of which was largely destroyed. This furnace, measuring approximately 30 cm [12 inches] X 60 cm [24 inches], was built with a thickness of 11-12 centimeters [4.5 inches].” 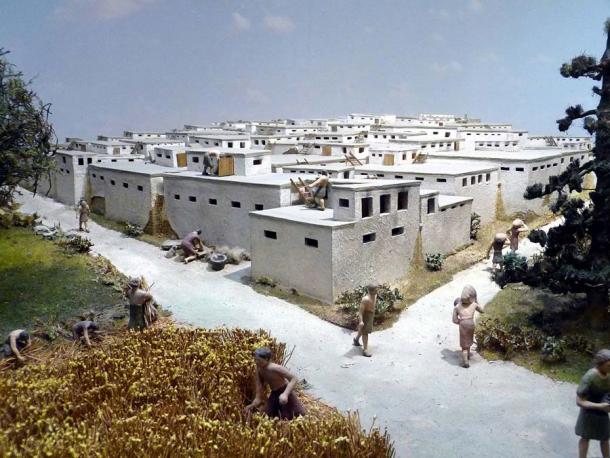 Model of the Neolithic settlement of Catalhöyük in the year 7300 BC and the Catalhöyük ladders are plain to see where they poke through the roof of each home, which are all joined to one another. (Wolfgang Sauber / CC BY-SA 4.0 )

Çatalhöyük has often been regarded as a center of advanced culture in the Neolithic period , despite the absence of any public buildings as such. The population ranged somewhere between 7,000 and 10,000 people, though there are no certainties in this regard. As mentioned above, the close proximity of the buildings to each other indicated a massive communitarian lifestyle, where marriage, trade, and other relations existed within neighborhoods in a symbiotic relationship. The houses were thus important to material, social and ritual daily life.

The inhabitants resided in mudbrick houses , without any footpaths or streets between giant co-joined blocks of homes. The rooftops functioned as streets in their absence. The ceiling openings also functioned as ventilation for the furnace ovens, acting like chimneys. With the ovens, which were on the south wall of the room, lay the ladders, as seen in the find above, write the archaeologists on the Catalhoyuk Research Project website.

The dead were buried underneath the houses they lived in. There were side rooms available that acted as storage areas. Most importantly, houses were not seen with the permanence they are today: they were constantly rebuilt, reworked, and redone. And meticulous planning went into house construction and arrangement.

Moving forward, Mr. Turkcan, who is going to be overseeing explorations for the foreseeable future, provided some very exciting news,

“We carried out excavations in a newly opened 200 m2 area in the Neolithic East Mound, called the North Terrace, and as we shared especially in the summer, we planned to see the street phenomenon clearly and to reveal a second Neolithic Period neighborhood.”

Top image: Three-dimensional modeling showing the way into a Neolithic Anatolian house and the position of the furnace oven under the 8,500-year-old Çatalhöyük ladder recently unearthed at the Turkish site. Source: Grant Cox / Arkeonews