4,000 years ago, a boat sank onto the bed of a channel of the Euphrates River, near the ancient city of Uruk. Now, archaeologists working in modern-day southern Iraq have been forced to conduct an emergency rescue excavation in order to protect its remains.

Discovering a Mesopotamian Boat in the Desert

The team of Iraqi-German archaeologists, from both the Orient Department of the German Archaeological Institute and the Iraqi German Mission of the State Board of Antiquities discovered the boat during documentation of the buffer zone surrounding the ruins of Uruk, also known as Warka in Arabic, back in 2018.

The boat was originally made out of palm leaves, wood and reed. It was then covered in bitumen, also known as tar or asphaltum, a semi-solid kind of petroleum which was used in Mesopotamia in the construction of buildings and for waterproofing reed boats. According to ThoughtCo. “ bitumen is a “naturally-occurring organic byproduct of decomposed plants” which humans have used for at least 40,000 years. 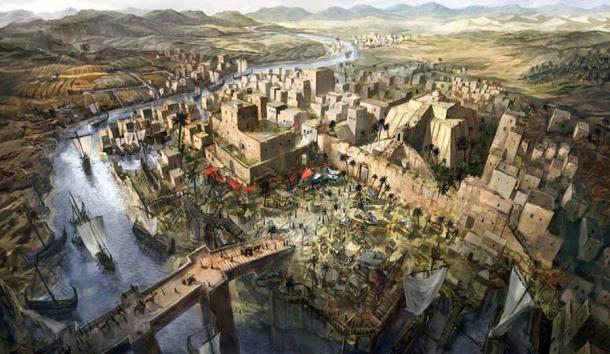 A reconstruction of how an ancient Mesopotamian city could have looked. ( Jeff Brown Graphics )

At the time of discovery, the ancient Mesopotamian boat was photogrammetrically documented. However, being located near road traffic, the team decided that it was imperative to conduct an archaeological rescue mission to ensure the preservation of these unique remains. The boat was 7 meters (23 ft) long and 1.4 meters (4.59 ft) wide, and was buried in sediment after it sank to the bottom of the river 4,000 years ago.

The remains are particularly fragile, although surprisingly well-preserved, even though they had been partially exposed over recent years and were visible above ground. The organic remains, as in the palm leaves, wood and reed, have decomposed over time, but their imprint is still visible today within the bitumen. Arkeonews reported that during the excavations, “the top of the boat was covered with clay and plaster shell to stabilize it, and thus it was possible to save the entire boat.” 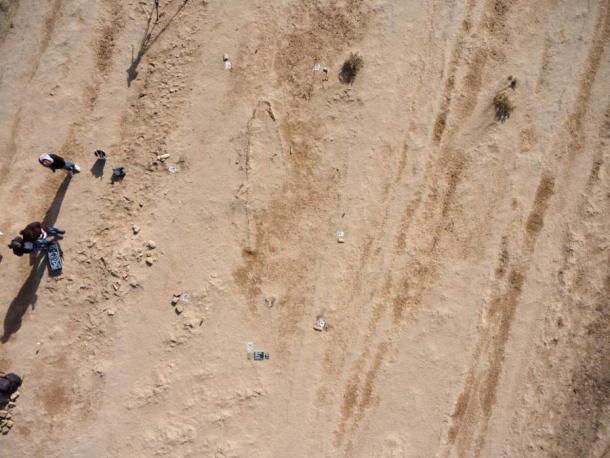 What’s a Boat Doing in the Middle of the Desert?

It may not look like it today, but Uruk was once the largest human settlement in southern Mesopotamia. These days, the remains of the city can be found in a dusty desert, several kilometers east of the present-day Euphrates River. 150 miles (241 km) south of Baghdad, Uruk was built next to what is now the dried-up remains of a channel of the ancient river.

This area was once home to some of the world’s oldest cities, which grew up around fundamental water sources and irrigation projects, and, as Apollo Magazine has described, Uruk itself was once “surrounded by freshwater reed marshes, fertile alluvial soil, and waterways giving access to neighboring towns and the Persian Gulf.” Hence the sunken boat.

Archaeologists believe that Uruk-Warka is one of the world’s first cities, within the area which the Greeks named Mesopotamia, a word meaning “the land between rivers” due to its location between the Euphrates River to the west and the Tigris River to the east.

History of Uruk: A City of Firsts

As described by Apollo Magazine , “ Uruk was home to thousands of people whose lives were based on fishing and the herding of cattle, sheep and goats, together with the cultivation of wheat, barley, apples, figs, and groves of date palms. The city was the biggest of the settlements that had developed across a landscape of flood plains formed by branches of the Tigris and Euphrates in the southern half of what is often termed Mesopotamia.”

Uruk has been remembered as a city of firsts. The first real city, the first example of architecture made in stone, home of the first ziggurat, the location where writing originated, and the first city to create the cylinder seal. By about 2900 BC, Uruk is believed to have been home to up to 80,000 people, living within the walled city which covered about 6 km2 (2.32 square miles).

Over time, and thanks to the effects of climate change , the Euphrates channel dried up, while the main river itself also shifted course and moved further away. After a period of constant warfare, there was a devastating drought around 2250 BC, after which time the importance of not just Uruk, but all of southern Mesopotamia, declined. The ancient city continued to be sparsely inhabited until the Islamic conquest of circa 633 to 638 AD when it was completely abandoned. 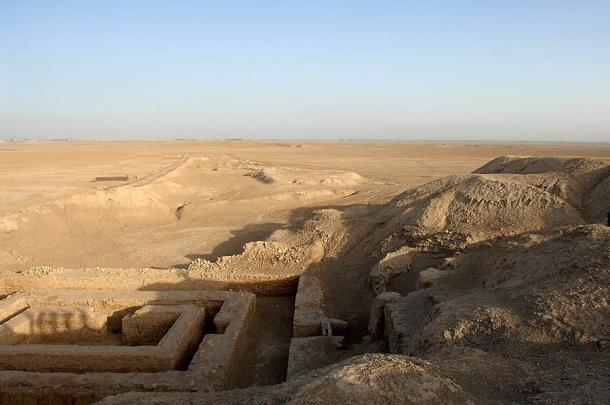 The first excavations of Uruk-Warka were conducted in the 1850s by the British explorer William Loftus. For want of the exciting discoveries being made in other northern Mesopotamian sites, he soon gave up, and since 1912, the archaeological site has been excavated by a long term project led by the German Archaeological Institute.

In December 2021, Al-Monitor reported that various European archaeological teams were making important discoveries in Iraq. According to Laith Majid Hussein, director of the Iraqi State Board of Antiquities and Heritage, these European archaeologists are actively training Iraqi archaeologists in projects throughout the country, in the hopes of creating “a generation of well experienced and professional excavators.”

The Mesopotamian boat excavation is one such project. A very small percentage of ancient Uruk has actually been excavated so far, most of it being made up of mud-brick architecture. Many of the findings which have come to light at Uruk since the German project began in 1912 were published in a book entitled Uruk: First City of the Ancient World .

After many decades of conflict and looting, keeping in mind that until 1969 it was common practice to divide finds between foreign excavators and Iraq, the archaeological landscape in Iraq appears to be changing. The recently excavated Mesopotamian boat has been transferred to the Iraq Museum in Baghdad for conservation and further analysis, in keeping with current Iraqi antiquities laws.