In a fascinating new study has found that dozens of silver pieces found during excavations in Israel and the Gaza Strip were actually used as currency in ancient times. Since the silver pieces were likely made and put into circulation sometime between 1,700 and 1,600 BC, in the Middle Bronze Age, this would make them the oldest form of currency ever discovered in the Levant (modern-day Israel, Jordan, Lebanon and Syria).

“This is the earliest evidence of hoarded silver [found in the region],” confirmed study co-author and University of Haifa archaeologist D. Tzilla Eshel, in an interview with the Times of Israel . Previous discoveries had suggested that people in the area only began using coins in the 12th century BC, or during the early Iron Age.

The revealing study is just published in the Journal of Archaeological Science, by a team of Israeli archaeologists from the University of Haifa and Hebrew University. 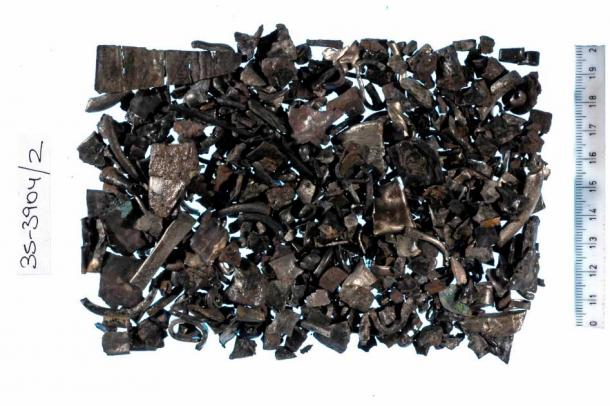 The 3,600-year-old hoard of pieces of silver discovered in Israel. (IAA)

Ancient Currency of the Levant

Chemical analysis revealed that the silver proto-coins were made in Anatolia (present-day Turkey), the researchers wrote, and may have been passed between several parties before reaching their final destination in what is now Israel.

It was already known that ancient cities in the Levant and the surrounding Mediterranean region were trading with each other during the Bronze Age . But the discovery of the extremely early proto-coins so far away from their point of origin shows that trade networks must have been more advanced than had previously been believed.

“This means that we are witnessing the first evidence that there was continuous and long-term trade of metals between the Levant and Anatolia, already 1,700 years before the common era,” Eshel explained. “We know for sure that in the Iron Age this kind of trade existed, but our findings move the beginning of this type of trade in metals to 500 years earlier.”

Before Silver Coins, There Was ‘Hacksilver’

The silver “coin” collections were found in Israel’s northern interior, at archaeological sites in Megiddo, Gezer and Shiloh, and at a site known as Tel el-‘Ajjul in the Gaza Strip along Israel’s southeastern Mediterranean coast. A few other silver pieces discovered long ago that are currently on display in museums were also re-examined, to confirm that they would have been used as early proto-coins as well.

What gave the truth away was the fact that the pieces of silver in the various hoards were cut purposely to match specific weights. The term to describe pieces of silver created to such specifications is ‘ hacksilver,’ which originates from the German ‘hacksilber’ and refers directly to silver that has been cut to standard weights to create a form of money.

Noting that multiple hoards of hacksilver had been found throughout the Levant, often stored inside pottery or wrapped in fabric to keep them protected, the researchers concluded that such money must have been exchanged quite freely by traders and merchants working in the Levant in the second millennium BC.

Minted coins made from silver or other metals were not widely used in the region until the first millennium BC. So up to that point the value of silver was determined strictly by its weight and not by its appearance.

An example of how the system worked can be found in the Bible, with identifies the silver shekel as the primary ancient form of currency. Shekels were made from broken pieces of silver and the standard weight of one shekel according to the Babylonians, says the Times of Israel report, was 16.83 grams, or six-tenths of one ounce. This means that when Abraham purchased the Cave of the Patriarchs in the Book of Genesis for 400 shekels, he was required to turn over 6.7 kilograms or 15 pounds of silver to the Hittite seller.

From the beginning, the Israeli researchers realized the silver pieces must have originated from far away. They knew this because there were no silver mines in the ancient Levant.

To find out where the silver came from, the researchers used isotopic testing to uncover the precise chemical composition of the metal. Isotopic testing is a bit like fingerprinting, in that it can link a particular chemical “print” to a specific location on the planet.

In this instance, the silver pieces were matched to silver mined from a particular geographical area of Anatolia (although not to a specific mine in that region).

This doesn’t prove conclusively that the silver was turned into money in that location. But it does link the silver to a different part of the world than the Levant. This information is vital, since it reveals vibrant connections between geographical regions that arose for economic reasons.

“Before, archaeologists tracked trade routes using ceramics, but not every trade route has ceramic evidence,” Eshel noted. “This is the first time we are doing it for silver in the Bronze Age.”

Silver was known in the Levant as early as the fourth millennium BC, when it was used to make jewelry. It was first used as money in the Mediterranean region in the third millennium BC.

“We know that the silver was the main means of value and exchange in Mesopotamia for a long time, even before the Levant,” Eshel explained. “Everything was valued by silver shekel.”

At this time silver was reserved mainly for large purchases, with barley, wool and other metals used to as a type of currency to facilitate everyday exchanges (their value would have been pegged to silver in some way, however).

Silver likely only came into more general use when new mines were discovered, making it possible to put silver pieces into distribution in significant enough quantities to facilitate large-scale trading. This would have happened sometime in the second millennium BC in the Levant, as exhibited by the proliferation of hacksilver collections dating to that time.