A 10-year-old boy from Sutton-in-Ashfield, Nottinghamshire has joined the ranks of the United Kingdom’s most successful and well-known metal detectorists. While out searching in a field in Woodbridge, Suffolk with his father, George Henderson found a 13th century medieval priory seal matrix, a metallic artifact that would have been used to stamp and verify official documents.

George learned the art of metal detection from his dad Paul, who has been an avid practitioner of this fascinating hobby for the past 20 years. The two eager explorers were just 10 minutes into their Sutton-in-Ashfield hunt earlier this year, when the younger Mr. Henderson suddenly got a strong hit on his detector. George had to dig down about five inches (13 centimeters) to unearth the object, which he and his dad could tell was quite ancient based on its design and old-style Latin inscription.

What they pulled out of the ground was a small, oval-shaped seal, which would have been used to make distinctive identifying imprints on important documents. 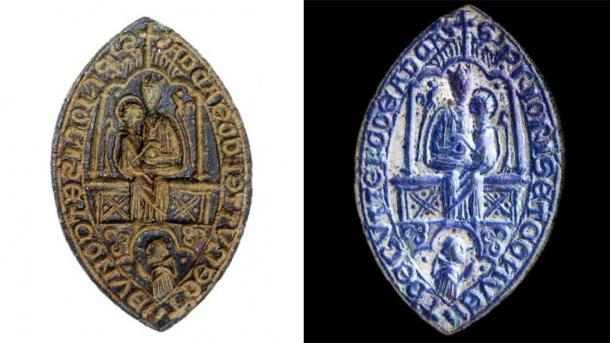 Close up detail of the priory seal matrix. ( Hansons Auctioneers )

The two detectorists didn’t realize at the time just how old the oval seal was, but experts were later able to verify that it had been manufactured in the 13th century. The seal’s Latin inscription revealed the truth, as it read the following:

‘Seal of the Priory and Convent of Butley, of Adam, Canon Regular.’

This inscription refers to, a religious house that was founded near Woodbridge in 1171. An individual named Adam served as the prior at Butley Priory house for 16 years, from 1219 to 1235. The seal matrix was designed to carry his official seal, and its age must be almost exactly 800 years old, give or take a few years. 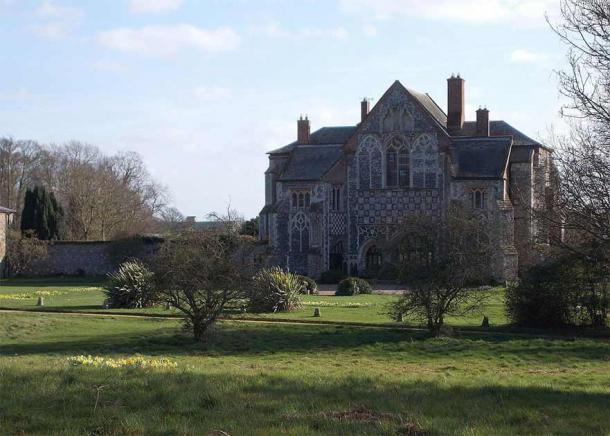 In medieval times, it was common practice for government officials and religious authorities to add wax seals to important documents, to verify their authenticity. A seal matrix, or printing face, would be made with distinctive imagery representing the individual to whom it belonged, and that individual would add their seal as a representative of a particular administrative office or institution.

Prior Adam’s long-lost seal features an image of the Virgin Mary and her child, the baby Jesus. The priory was dedicated to the Blessed Virgin Mary when it was opened in 1171, and remained so until the religious house closed for good in 1538.

This type of medieval seal is rarely found at organized archaeological excavations. The usual practice in medieval times was to have these metal seals melted down when they were worn out or no longer needed.

This particular seal matrix must have been somehow lost before it could meet this fate. It might have stayed lost and buried forever, if lucky young George Henderson hadn’t been out practicing his favorite hobby in the right place at the right time. 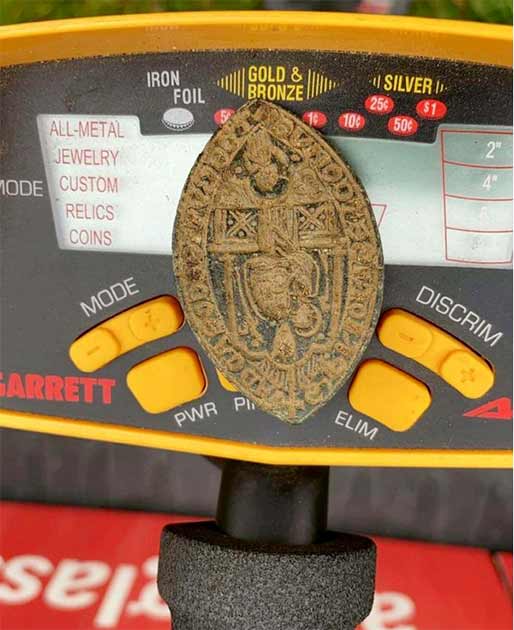 The seal balanced on the lucky metal detector that found it. ( Hansons Auctioneers )

The 13th century copper-alloy seal matrix is undoubtedly a rare and historically significant item. George and his family ultimately decided to put it up for auction, and it was listed for sale by Hansons Auctioneers’ Historica on March 24. The expectations of the Henderson family were high, and those expectations were met as the seal matrix was sold for the hefty and impressive sum of £4,000 ($5,260). George will split the proceeds of the sale with the farmer who owned the field where the seal matrix was unearthed, as is required by law.

“The seal’s historical importance rather than value is what’s important to both me and George,” his dad Paul told the East Anglian Daily Times . “It’s the most exciting find either of us have ever made.”

Young George shared his father’s excitement at their unique discovery.

“I’m happy I discovered it,” he said succinctly, revealing himself to be a man of few words.

“George has been metal detecting on and off since the age of five but he doesn’t always come out with me. He’s found one or two interesting things over the years,” his proud father explained. “He knew the seal was special when he dug it up but he didn’t know what it was. I did. I knew it was a medieval seal matrix.”

“George was laid back about it at first,” Paul continued, “but, as the day wore on, people kept asking to look at it and he got more excited.”

At just 10-years-old, as of now, George Henderson is the youngest metal detectorist to ever make such an historically significant discovery in the United Kingdom. That is a distinction he may hold for quite some time.

Celebrating a Proud Day for Metal Detectorists in the United Kingdom

Interestingly, Hansons’ March 24 auction included not one but two historically important artifacts discovered by amateur metal detectorists (each of whom, coincidentally, can be identified by the initials ‘GH’). In addition to George Henderson’s medieval seal matrix, the Derbyshire auction house also sold a 17th century golden ring that was found by Graham Harrison, a 64-year-old veteran detectorist from Lincolnshire who also dug up his valuable artifact from a field in Nottinghamshire.

Harrison’s ring dated to the 17th century, and had once belonged to an individual who’d held the office of High Sheriff of Nottingham (yes, just like in “The Adventures of Robin Hood”). This extremely unusual artifact sold for £8,500 ($11,180), which means that two metal detectorists on opposite ends of the age spectrum were handsomely rewarded for their contributions to archaeology and history on the very same day.